It was a good week of riding.  On Saturday, Sunday and Thursday I covered over six hundred kilometres around Southern Ontario.

Saturday had us dancing around in front of the coming storm.  The horizon south of us was ominous to say the least.  We dodged and weaved but eventually rode into the curtain of rain only to have one of the old Kawasakis in the group (and I mean old, it was almost as old as I am) run rough when it got wet.  Fortunately we had already been to three local microbreweries and had loaded up on craft beers, so we were all set for a rainy evening indoors in Owen Sound.

After watching Canada’s girls’ team get kicked out of the world cup (but England won so I was still happy), we watched some Isle of Man TT, talked bikes and drank local brews.  The next morning the torrential rain continued.  After some hot coffee I hit the road to test my rain gear like never before, and get to the family cottage in Bobcaygeon where my wife and son were worrying about me.

I was the warm and dry centre of the universe making a Tim-on-a-Concours sized hole in the rain.  Since Jeff had told me to move the petcock from “Pri” to “On” (Pri doesn’t mean the primary tank, it means prime, as in giving the engine lots of extra gas to start after being off for a long while), the Concours had developed a new smoothness with no more lumpy low RPM or gas burning backfires when I came off throttle.  With the Connie running better than ever I was ready for a challenge. 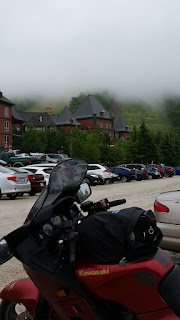 I tried to stop at Blue Mountain for breakfast where my son and I had gone ten weeks earlier on our first ride of the year, but it was a zoo.  I eventually found a Tim Hortons and had some hot tea and breakfast.  Pushing on from Collingwood I kept hoping I’d ride out of it, but it only came on heavier.

Riding in the rain is nice, everything smells fantastic and the colours are super saturated.  It gets less magical when you’re doing it in heavy traffic.  Drivers see you even less than they normally do and you’re dealing with spray and slick pavement as well.  Many moons ago a friend of mine (an ER nurse) invented the Trotter Precipitation Index, which theorized that driver IQ is inversely proportional to the amount of precipitation falling (drivers get dumber the more it rains).  I’ve generally observed this to be true, but it takes on terrifying new dimensions on a motorbike.

The slog in traffic from Collingwood to Orillia was tense and the rain had finally found a way into my rain gear, soaking my crotch.  Nothing makes you crankier than a wet crotch.

I’d been on the road about three hours when I got to Orillia.  I was on my way (still in heavy traffic) across the causeway on the north end of Lake Simcoe when everything stopped due to an accident.  The road was closed, it was pelting down with rain and so dark street lights were kicking on.  I pulled off into The Point restaurant and was saved with excellent service, hot coffee and home made soup.  I looked so bedraggled that the waitress didn’t even charge me, but I left a big tip.

An hour later my core temperature was back up and I was uncramped and ready to take another run at this underwater ride.  The traffic had finally cleared and the road was reopened so I crossed the causeway and headed south around the east side of Simcoe.  No sooner had I saddled up than it began pelting down again.  My warmed up dampness became cold and rain soaked in short order, but I was closing in on my goal.

I pulled out of the stop-start traffic on the local through road and headed toward Beaverton and some dirt bike boots I saw on Kijiji, but missed a turn in the torrential rain and ended up 10 miles down the road I needed to take to the cottage before I realized I’d missed it.  I couldn’t bring myself to turn around so I pushed on toward the finish line.

The air temperature was only about 15°C and I was soaked again.  Just when it looked like I had this thing in hand, and with no warning, the road was suddenly gone, replaced with deeply rutted mud and gravel.  The old guy ahead of me in his new SUV was worried about getting it dirty and kept stopping (!) in the mud while he tried to figure out where to drive next.  Ever tried riding a loaded Concours in ankle deep mud and ruts?  It isn’t easy to keep upright, especially when you have to keep stopping and starting.

My Zen beginning to this trip was ebbing away.  I was cold, sore, and tired, and I’d missed my turn and a chance to pick up some lovely Alpinestars dirtbike boots for a song.  Now I was hanging on for dear life, trying to keep the big bike upright in this strange, slippery, grey mud.  To top it off I was stuck in traffic that had been inflicted with the TP Index. 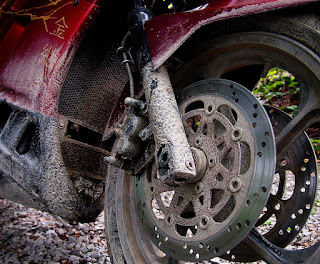 I might have stopped but there was nowhere to do it.  Cars (but mostly SUVs) were splashing around in both directions, and I was covered in mud.  There were no shoulders to speak of.  At this point I started to get angry.  Alright, fuck this, I’m getting where I’m going instead of doubting myself.  Standing on the pegs I aimed the Concours around the deepest ruts (courtesy of yahoos in cars spinning out in the start-stop traffic) and picked my way through. When you take doubt out of your riding the bike responds to your determination with a sure footedness that I found encouraging.  Ten agonizing, slow and muddy kilometres later I emerged onto tarmac once again.

As I rolled into Fenelon Falls I grabbed the brakes for a stop sign and nothing happened.  The gravel they’d laid down in the construction was full of limestone dust and that grey paste had gotten into everything, especially my front brakes.  I got it stopped and pulled over for a pee in the rain.  By this point I was ready to pick up the bike on my back and carry it the rest of the way, some squishy brakes weren’t going to slow me down (literally or figuratively).

I saddled up again and rode through Fenelon Falls which was backed up with cottage traffic.  Passing the mall some yahoo in a Mercedes SUV thought he’d suddenly pull out to get into the line of traffic inching along the other way.  I hit the brakes, skidding the back tire in the never-ending rain, he saw me at the last moment and stopped.  Had he hit me I’d have jumped through his windshield and beaten the shit out of him, I was pretty wound up at this point.  He got a fine what-the-hell-dude gesture but didn’t want to make eye contact with the guy he almost hit so he could sit in a line of traffic.

I was finally out of Fenelon and on my way to Bobcaygeon.  The bike was running on empty, but I was ok with that, I still had miles of gravel fire roads before I got into the cottage and lighter would be more manageable.  I ignored the gas station in Bobcaygeon and pushed on to the cottage road with the odometer showing 236 miles since the last fill up.

The cottage road was slippery, but not like that damned construction, and it was graded properly.  I was making my way down this roller coaster of a road when the bike started to chug.  I was monkeying with the choke to keep it going when I remembered how low I was on gas.  A quick twist of the petcock to Reserve (which got me all the way back out four days later to fill up at 248 miles on the odo) made everything happy again and I road the final couple of miles without incident.

It was still hosing down when I pulled into the cottage garage and took off my helmet with shaking hands.  Should I have stopped?  Hells no!  I was looking for a challenge and the weather, traffic and horrible roads had provided one.  Doing a difficult thing well is its own reward, and this epic submarine riding trek becomes another unforgettable experience that I can add to my riding résumé. 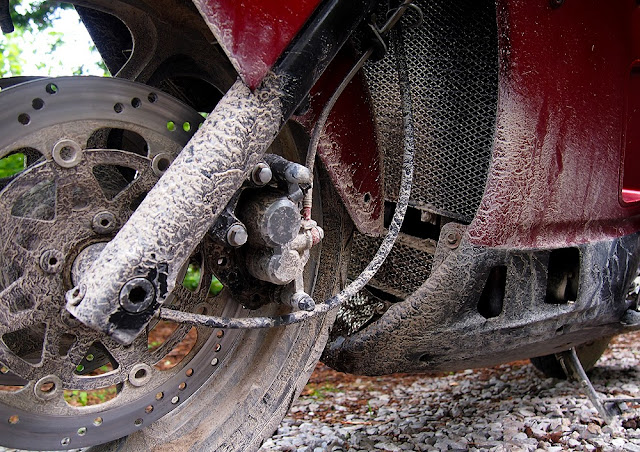 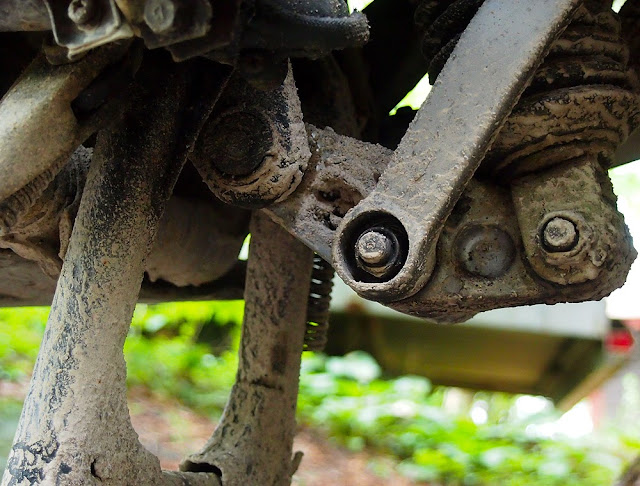 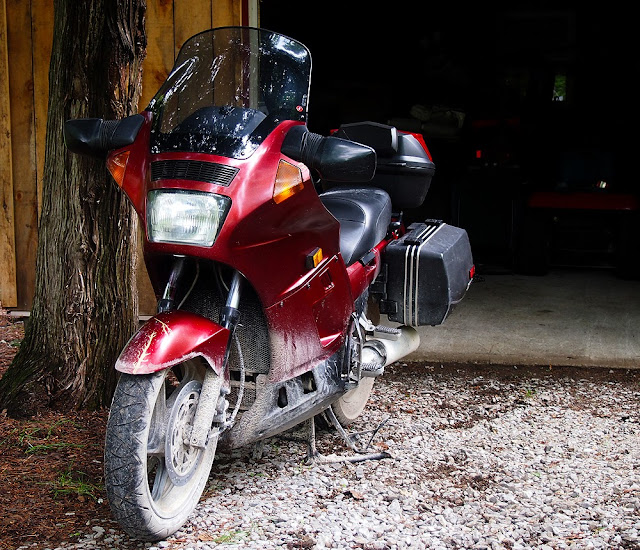