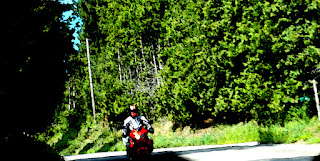 Things fell together just right for a ride out to the 1000 Islands in Eastern Ontario.  My lovely wife had a conference in Ottawa, so we spent the weekend before where Lake Ontario empties into the St Lawrence Seaway.

This meant, for the first time, I had a support vehicle!   The panniers and top-box all went in the back of the car and I got to ride light and solo.  It also meant I had a vehicle that could take pictures of me riding.

I’d dialed back the rear suspension for a single rider, so the Tiger was more compliant.  The weather was, as it has been for weeks, sunny and very hot.  It wasn’t so bad in the morning, but by noon it was sweat-box hot.

We dodged around the GTA, not trusting the crumbling infrastructure, overcrowded roads and distracted yet aggressive drivers.  Traffic was light and moving well north of the city on a summer, Saturday morning.  We stopped briefly in Schomberg at Main Street Powersports for a quick stretch and look around what may be one of the most eclectic motorcycle shops in Ontario before pushing on into the heat.   Bypassing Newmarket, we found mostly empty roads as we wound our way down to Uxbridge where we stopped for a second breakfast/early lunch at Urban Pantry (having a foodie and professional researcher driving your support vehicle has big benefits!). 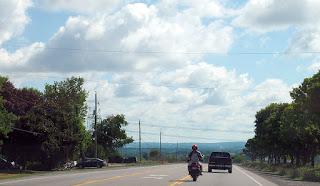 Every time I got off the bike it was that much hotter suiting up again.  It was just past noon when we finished lunch and the air temperature was in the mid-thirties with humidity pushing it well into the forties.  It was just bearable in motion so we quickly got moving.  Pushing down to the 401 meant more traffic, but once on the highway we made quick time and the hot wind was better than stagnant air at traffic lights.

My support vehicle pulled off at Port Hope where we discovered a lovely, old downtown during a hydration stop.  I thought it would be nice to take the old King’s Highway (Lakeshore Road) along to Prince Edward County where we were going to check out some wineries and Sandbanks Provincial Park.  At first this seemed like a bad idea as we were constantly stopped at traffic lights through never ending box store/strip malls in Coburg, but soon enough we left the last remnants of the GTA behind and found ourselves on a winding old highway that kept Lake Ontario in sight to our right.

Crossing the Murray Canal Bridge, we entered Prince Edward County, which immediately impresses with a relaxed island vibe.  Following wine and arts tour signs we meandered across the island enjoying light traffic and a stop at Sandbanks Winery, which not only had some wines on hand that you can’t get through retail, but also appeared to be where all the pretty girls go to drink on a Saturday.  The bachelorette party looked to be well along at two in the afternoon.  They jumped into a shuttle and were driven to the next winery, which was about five hundred feet down the road.  They must have looked like a train wreck the next morning.

We rode into the afternoon, stopping at The Duke of Wellington Pub for a much needed cool down and hydration.  The view off the deck into the harbour was lovely, as was being out of the relentless sun for a while. 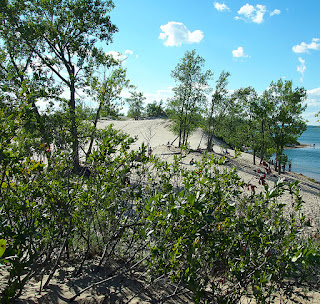 It was a short ride to Sandbanks Park, but getting in was tricky.   After waiting in line for ten minutes I pulled up with the car and said I’d just park in the same spot as the car since were all here as a group, but the kid at the gate didn’t know what to do about that and spent ten minutes calling people to ask what he should do… while I stood there on the bike on 50°C tarmac.  He finally told us we had to pay two full vehicle admissions.  It’s things like this that make motorcycling in Ontario that much harder than it needs to be.  We’re not the same as cars or the massive SUVs most people like to drive around in, we don’t require the same space or resources, but rather than honour that Ontario seems to do everything it can to ignore it.

The park itself was nice and the dunes that make it famous looked like something out of the Caribbean.  We stuck around for a couple of hours and even went for a swim to cool off.  If you walk down the beach a bit the crowds let up and it’s possible to find some quiet space to relax.

Back on the road with sand in my everywhere and sweating freely, I was starting to feel this ride.  Into the lengthening shadows we went, pushing across the length of Prince Edward County toward Kingston.  I felt like I was in a sandwich press, the setting sun and the tarmac both pressing in the heat. 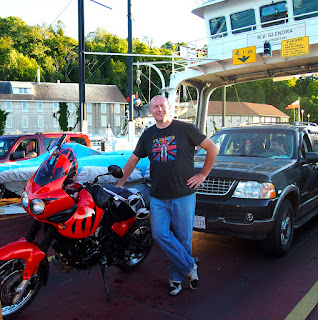 A welcome break came at the Glenora Ferry, which takes you from Prince Edward back to the mainland for free and runs every fifteen minutes in the summer.  It’s only a ten minute crossing, but it’s a pretty one with beautiful views up and down the straights.

The line up was a welcome fifteen minute break from the saddle that gave me time to change into some cooler jeans.  Once on the ferry you can wander around and see the sights.  Before you know it you’re firing up the bike ready to go again.  If you have to get to Kingston from Prince Edward County in the summer, go the Glenora way! 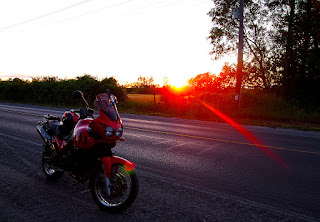 The temperature finally began to abate as I rode away from the ferry.  Shadows got even longer and the bugs began to thwack off my helmet.  We dodged and weaved across southern Lennox County, eventually finding our way onto the 401 just outside of Kingston.

A stop for gas had the Tiger using 19.7 litres to travel 412kms.  That’s 4.78l/100kms or 49.2 miles per gallon on everything from urban stop and go to fast highway riding.  Considering it’s expected to get about 40mpg, I’m really happy with those numbers.

After a stop for dinner in Kingston we got back on the highway for the final forty-five minutes to Gananoque and our hotel in the Thousand Islands.  The sun was well down and the air temperature had dropped.  Stars filled the sky and heat boiled out of the sun baked pavement.  Tucked in behind the windshield as I thundered down the dark highway, it felt as though I was riding through VanGogh’s Starry Night.  We pulled in to the Glen House Resort just past 10pm.  I immediately took a cold shower and flaked out on the bed.