I put the Concours ZG1K project bike up for sale just to see how it would do.  I didn’t expect a reply but got someone who is smitten with it and immediately offered me a trade worth about $2000 (a Phantom3 drone with a pile of expensive peripherals).  I took a drone training course last year and have been looking for a way to get some flight time in accordance with the Transport Canada flight planning we practiced in the course.  This would do that and also let me explore the aerial photography market first hand.  This is a trade that could end up paying for itself many times over.


I’m fighting that skepticism, but what I’m also fighting is some classism, morality and loyalty.  The young guy interested in the bike has the kind of online profile that makes you roll your eyes.  Every photo of him is half dressed and flipping the bird.  Which leads me to the moral quandary.  Handing this bike off to some yobbo who is likely to kill himself on it isn’t something I can wash my hands of.  Then there is the loyalty.  I brought the Concours back from the dead.  We’ve done many long trips, including a once in a lifetime ride down the back straight of the Indianapolis Motor Speedway.  Had the carbs not shit the bed on the worst possible day (the first day of a new riding season after a long winter off), I would have still been happily riding it today.  Had they died the autumn before, I’d have had the winter to sort them out.  Bygones, but I love that my hands brought this old thing back to life. 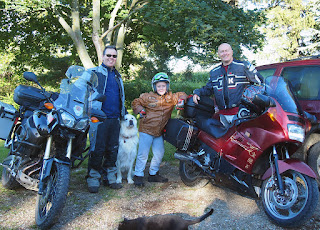 So here I am, with a great opportunity to make some space in the garage while pursuing a trade that could end up being quite lucrative.  That space could be filled with a new project bike and I’d be back doing aerial photography again.  There is a lot to recommend moving on this, but I’ve got some issues to work through first.


The classism I can get past, but the selling a weapon to someone without the sense to handle it is nagging at me.  I’d feel responsible if something happened.  As heavy as that is, what really bugs me is feeling like I’m sending Connie on to an unworthy home where she’ll be abused, broken and forgotten.  The mechanical sympathy that I apply to technical work often breaks out into full on mechanical empathy.  This is one of those times.  Maybe now isn’t the right time to pass on the Concours.  Maybe what I should be doing is re-energizing this project and finishing it to the point where I can eventually pass it on to a more deserving home.  (Hmm, the classism crept back in again).