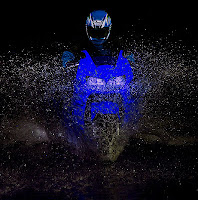 I was up early, getting ready for my 3rd day of commuting to Milton on the Ninja.  The sky was heavy, the roads patchy but still mostly dry.  In the 20 minutes it took me to get ready the weather moved in, rain bucketing down, the sky so dark the street lights came back on.

I’m standing there on my porch looking at the bike which I’ve got started, sitting in the driveway with rain tearing off it.  I’ve gotten into the safety gear, then the rain gear.  I’m hot and dry, but I won’t be for long.  The car is sitting there, an easy, comfortable option.

I was worried about the 401 but I need’t have.  With the rain it was barely moving.  By the time I got to Milton I was crawling along at walking speed behind a transport truck.  I arrived at the school after an hour in the wet.  The worst was in Elora, then I drove out of it and it was only drizzle, but by then I was hosed.

I only lost the back end once while downshifting and a quick hand on the clutch got that back in line.  I stopped downshifting after that while in the deep water.

It’s 2pm now.  Most of my gear is dry after some time under hand dryers and sitting on a warm lamp stand.  In retrospect, today would have been a good day to wear my big cool weather boots – I think they’re waterproof too, unlike the AlpineStar summer boots I had on.   I now know my gloves aren’t remotely waterproof.  The rain gear did a good job of keeping me warm and mostly dry.  The only wet spot on my body was on my stomach.  It probably got in under the jacket.  I’ll tighten that up next time.

It’s 6pm now, and trying to dry out wet gear in an air conditioned lab is all but impossible… there is nothing better than some good old sunlight on a hot deck: 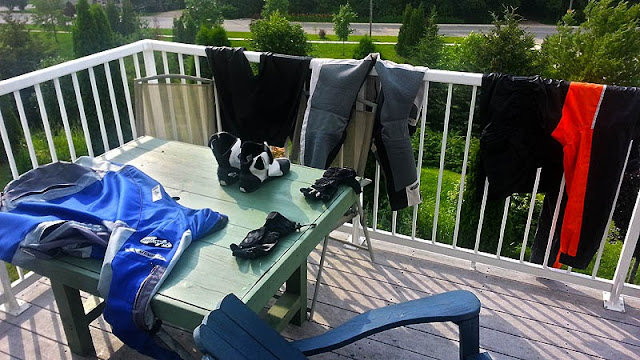