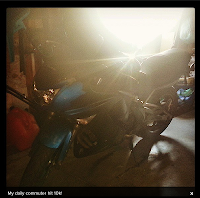 I looked at the odometer today as I pulled into the parking lot after my forth straight day of commuting and realized my ’07 Ninja has finally hit the 10k mile mark.  The commute got her there, it’s about 70kms each way with the first two thirds a country ride through the Niagara Escarpment, then an 11 km blast down the 401 before it slows down going into the GTA, then another couple of kms in Milton.  It’s a nice ride.  Less so when it’s pouring buckets of rain out of the sky, as it has for the last two days, but those were memorable rides too, even if uncomfortable, and a bit treacherous.

This weekend the Ninja gets round two of its spa treatment, a coolant flush and change and a cleanup after all that wet riding.

I was at Two Wheel Motorsport the other day getting oil filter and gaskets and the older guy behind the counter was talking about how it isn’t about how you do the miles, but about getting the miles in.  I’m beginning to see his point.  Wheelies and high speed corners are all well and good, but there is something to be said about being the saddle and putting miles behind you while you’re out in the world.

It’s Sunday afternoon and I’m taking a movie break with the family before coming back and finishing putting the bike back together again.  I got the coolant flush done (though what came out was about as perfect as I’ve ever seen used coolant), cleaned the engine while I had the fairings off, and stripped the black off the tank.  The goal is to get the bike roadworthy for another week of commuting to Milton… that’ll be another 700kms behind me.