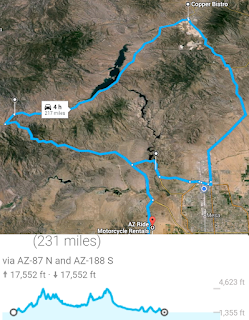 It was a cold and windy ride through the Superstition Mountains yesterday.  The route we took after taking Gaylen’s advice at azride.com gets you out of the city and into the desert quickly and lets you bypass most of the urban sprawl east of Phoenix.

Our trusty mount was a Kawasaki Concours 14.  I thought it would be interesting to compare my 20 year old Concours to a younger one.

After I got myself turned around and rode ten minutes the wrong way into Phoenix, we got moving in the right direction and soon found ourselves on the Bush Highway, a twisty, bumpy highway that doesn’t go anywhere – I guess that’s why they named it that. 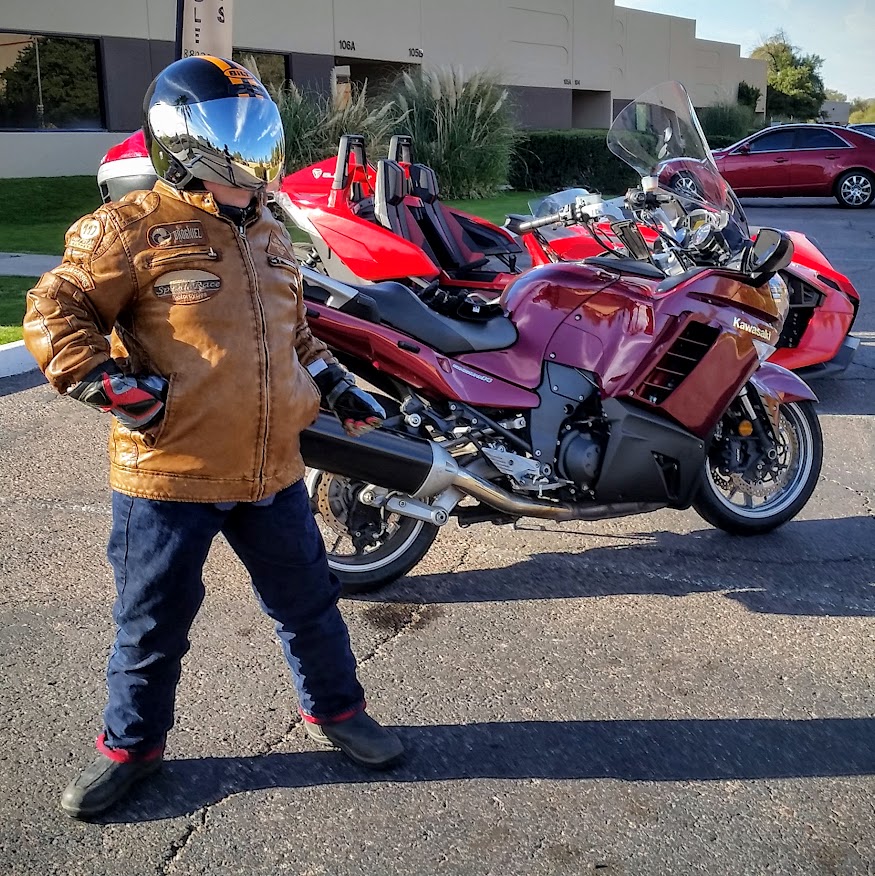 It took me some time to get used to this unfamiliar bike.  The gear shift was very close to and felt lower than the foot peg which made for awkward shifts, and the brakes felt very (dare I say over?) assisted unlike the old-school hydraulic brakes on my classic Concours.  When you applied the front brake you stopped in a hurry causing my pillion to plough into the back of me a number of times until I got really ginger with brake application.  The other off-putting part was that each time I used the front brake it was accompanied by a loud electrical whining noise like a cicada chirping.  Sometimes it would stop when I let go of the brake, sometimes it would keep whining afterwards.

I was unsure if this was a Concours 14 thing (doubtful) or an azride.com maintenance thing.  CoG didn’t suggest any known brake electrical noise problems so I suspect this is a maintenance issue.  The azride.com website didn’t mention what year the Concours was (unlike other rental sites which tell you it’s a 2015 but show you a five year old bike), but based on the body the bike we had was a pre-2011 model.  Maybe it’s starting to get cranky in its old age.


After owning three Kawasakis I have to say, man do they know engines.  Every one I’ve owned or ridden has had a jewel of an engine and this Concours was no different.  Passing through the tunnel leading out of Superior, the engine sounds echoing off the walls were spine tingling – it sounded like something straight out of MotoGP.

The engine didn’t disappoint in power either.  My Connie does the business with carburators and 300 less ccs, but what this bike does with the monsterous ZX14 1300cc lump is truly ominous.  I’ve ridden fast bikes before and this is one of the fastest.

On mountain roads this newer Concours felt smaller than my bike though they weigh the same.  The newer bike is much narrower and quite wasp wasted compared to the chunky older model.  That monumental engine that produces sixty more horsepower than my bike probably helps with that feeling of lightness too.

Wind-wise, I was able to ride in jeans all day into single digit Celsius temperatures without a problem.  The heat that pours off my Concours was absent on this one, though it was a cold day so it wasn’t something I’d notice anyway.

The windscreen is electrically adjustable and at the top it stopped all but the top of my head getting hit by wind (I’m 6’3″ and I had given up on windshields doing anything for me).  My bike gets me squarely in the shoulders and up all the time.  I didn’t like how much the windscreen wobbled at speed, it looked flimsy, not to mention goofy in its highest position.  Once I was back in town I lowered it back to a less Jurassic Park look.  Goofy or not though, it made a cold ride through the mountains much more bearable.  A transformable windshield is a piece of magic, though a more solid feeling one with manual adjustment would do the job better.  I’d rather not have the added weight and complexity of the electrical one.

I’ve got a 32″ leg and find my bike a bit cramped.  The ZG1400 was a bit more relaxed in the legs.  After a couple of hours in the saddle I had no problems.

The ergonomic problems began where azride.com made changes.  The huge risers they installed on this Concours looked like comedy units off a 1970s banana seat bike – huge bull horn things that put the grips right under my nipples, or so it felt.  They pushed me so far back that I was riding more on my tailbone – cruiser style – than I otherwise would have.  The narrow Concours 14 seat wasn’t build for this contortion and it became quite uncomfortable.  It makes me wonder how the stock handle bars would have worked.  I have low risers on my old Concours and have a slight forward lean, which I prefer to a bolt upright or reclined stance.

All of the electrical noise from the brakes and fuel injection made me cross.  I don’t mind electronics (I teach computer engineering), and my Ninja had EFI that was bullet proof, silent and efficient, but when the electronics are whirring away it is intrusive and just reminds you of another expensive thing that will break on you.  I don’t feel that this Concours 14 gave me a fair idea of what the breed is capable of.  I’d especially like to try a newer one to get a better sense of the machine.  Maybe Kawasaki will be doing a riding tour again next year and I can try a 2016 model.

That whacky old-guy handle bar riser (and accompanying sore ass) conspired to make me long for my own bike.  It might not have the heat management, or easier reach to the ground (which I don’t need anyway), or fancy moving windshield, but my old Concours feels solid, is usually the fastest thing on the road when you twist the throttle and offers a satisfying mechanical simplicity that I missed on this electronically whinny newer machine.