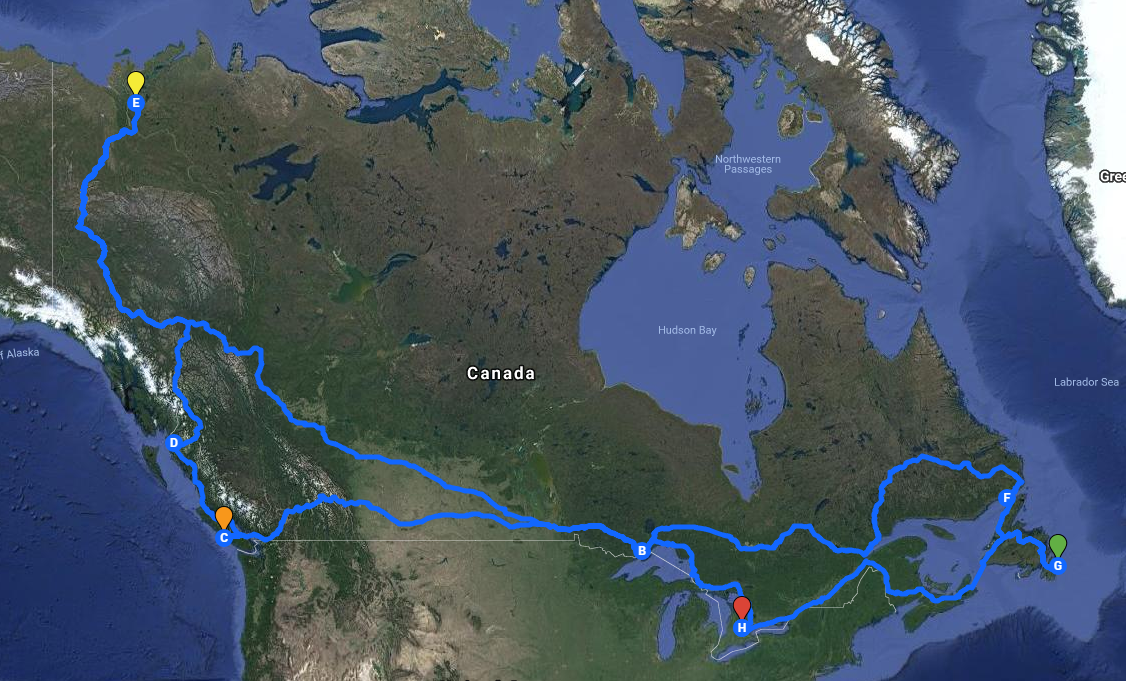 It can be done!  Coast to Coast to Coast in Canada.  It’s a monster ride though, over twenty thousand kilometres, all in the second biggest country in the world.

Starting from home in Southern Ontario I’d strike west up the Bruce Peninsula and over Manitoulin Island and up around Lake Superior.  From there it’s a straight shot across the Prairies and then through Calgary into the Rockies.  Through the Southern Rockies and Vancouver and then a ferry over to Vancouver Island and on to Tofino on the Pacific Ocean.


From Tofino it’s back across Vancouver Island and then north up the coast before taking the ferry from Port Hardy to Prince Rupert.  The ride from Prince Rupert is where things start to get tricky.  You’re on paved if very remote roads all the way up to the Dempster Highway and then it’s hundreds of kilometres up to the arctic circle and the mid-night sun.  By 2016 they hope to have an extension of the highway all the way to Tuktoyaktuk on the edge of the Arctic Ocean, then it’ll really be coast to coast to coast.

After dipping a toe in the Arctic Ocean it’s back down the Dempster before striking east through Grande Prarie and Edmonton.  The trip east retraces a bit of the Trans-Canada past Winnipeg before crossing Northern Ontario to Montreal.  It’s then up the North Shore to Quebec City before crossing the St. Laurence and making the turn at Rivière du Loup and heading into New Brunswick.  Crossing New Brunswick and Nova Scotia, it’s then a ferry ride to Newfoundland for the final leg to Cape Spear, the eastern-most point in Canada.

I think I’d have to make a point of crossing Confederation Bridge on the way past just to have set foot in every province and every Territory you can ride to in Canada.

The round trip is over twenty thousand kilometres, all in Canada, crazy!  Between higher kilometre days on highways and the lower mileage moments in the north, I’d hope to average 800kms a day.  If I could keep that up it could be done in just under a month (27 days).  Aiming at July of 2015, leaving on Canada Day (July 1st), I’d aim to be back home by July 31st, giving me four extra days in the mix to get the job done.  Leaving at that time will also mean seeing the mid-night sun above the Arctic Circle.

At about $60 in gas a day (3 fillups), a conservative $100 for lodging and $40 a day in food, I’d have an operating budget of $6200.  BC Ferries look like they’ll be about $260.  To get on and off Newfoundland it looks to be about $180 in ferry costs.  I’d land at Port Aux Basques and cross NFLD on the way to Cape Spear, but take the Agentia Ferry back directly to Sydney for the ride home.  All in I think I’d be looking at about seven grand to cover the trip.

Bike-wise I think I’d be considering sport touring options.  The vast majority of mileage would be on pavement, with only the push north on gravel.  Tire-wise I’d start on street tires and then switch over to something more multi-purpose in Whitehorse for the ride to the Arctic.  If John Ryan can go from Prudhoe Bay on an FJR, I don’t think I need to go full-SUV motorcycle with an adventure bike to get up to and back from the arctic.  The rest is a high mileage ride on first world roads.  I’d want to do it on a bike that makes corners fun. 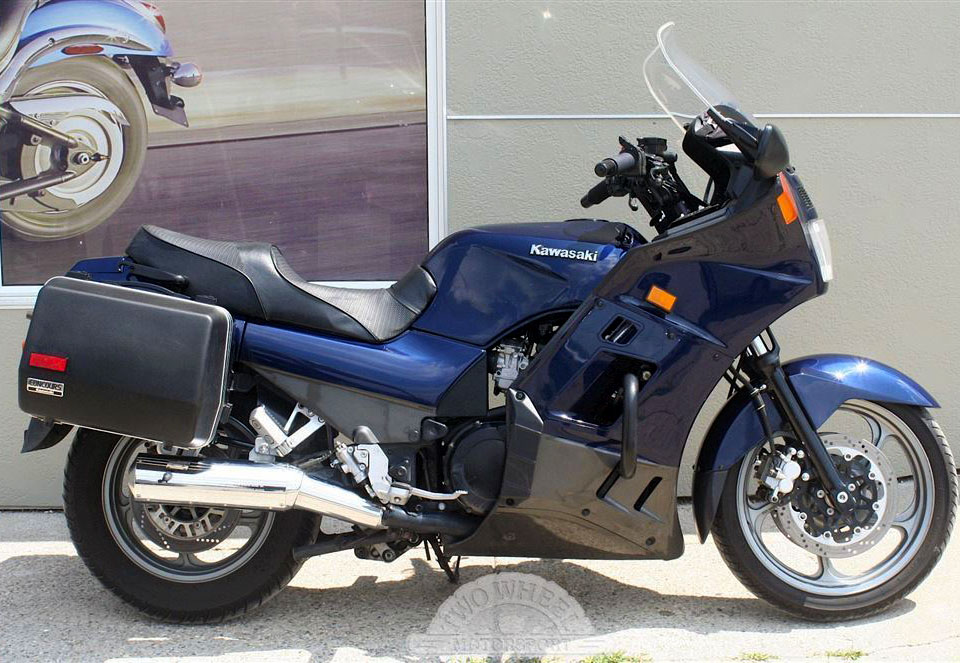 My current choice would be a bike that handles long distance duties well.  The Kawasaki Concours is just such a machine.  Two-Wheel Motorsport happens to have just what I’m looking for, a low mileage 2006 that would do the deed.  With a shaft drive and a bullet proof reputation, it would cover the miles enthusiastically.  My other bike choice would be the new Honda VFR800F.  It’s another sports tourer that could swallow these huge distances with confidence.

The final piece would be the media.  A Gopro clipped onto the bike would be running whenever the bike was in motion.  I’d also have a mobile video camera and my trusty Olympus SLR for other footage.  The trick would be not to get hung up with the photography, I tend to lollygag when I have a camera in my hand. 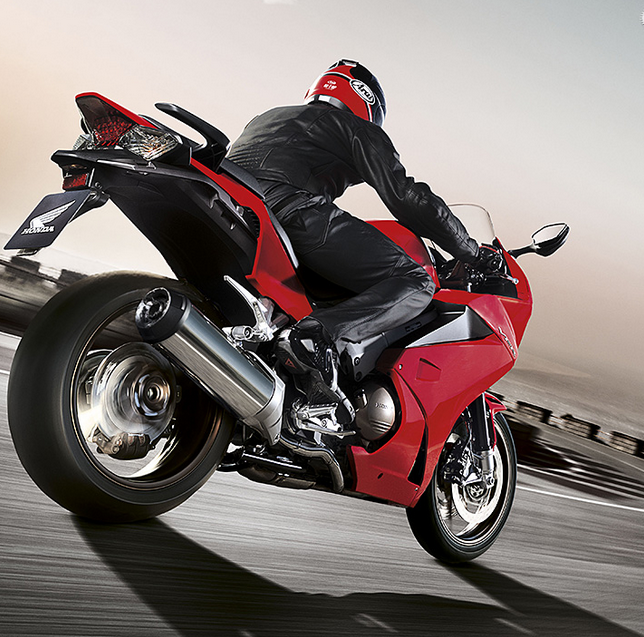 If the production was stepped up a notch, I’d meet up with my production crew at various spots along the way to off load footage and do some stock footage of me on the bike (which wouldn’t happen so much when I was alone).  Ideally I’d have a wingman for the trip and we’d both take turns at filming (and half the cost of lodging).  The trip itself would offer a live webfeed of mileage covered and where we are, including uploads of recent images and footage.

In the more fully-decked out version I’d go to OLN or Discovery Channel or the Travel Channel for some media support.  Then Telus, Rogers or Bell for some communications support, and finally to Kawasaki Canada or Honda Canada for some bike support.  It wouldn’t hurt to hit up local, provincial and federal governments to help as well, this is a uniquely Canadian focused trip, and with the final leg of the Dempster Highway finally happening coast-to-coast-to-coast is at last a possibility, it’d be nice to get the word out.