ECOO13 was bigger better, and better located that any of the ECOOs I’ve previously attended.  If you believe in ley lines then putting ECOO on the edge of a natural wonder captured some wonderfully thunderous energy.

I’m told that back in the day ECOO was enormous, much bigger, but those early immigrants were following a huge first wave of personal computing.  Since then computers have insinuated themselves into so many aspects of life that they often feel like just more work.

Informational democracy courtesy of computer networking on social media is a slow burn and is still building.  Instead of feeling disenfranchised by machines more and more people are recognizing them as an enabling influence, allowing individuals a voice where only mainstream media and large organizations once broadcast their influence.  ECOO has been building on this new wave of social media democratization every year since I’ve been attending.  It’s always in peril of being spun by the powers that be, but I still hold out hope that places like ECOO will allow people to realize how powerful they are in our new, flattened mediascape.

I’d signed up for an ECOO presentation without any really clear sense of direction. The past two years were pretty easy, I knew what I wanted to say and went after it, but after developing a digital skills continuum around pedagogy rather than cost cutting, and instead watching monopolistic corporate buy in, I’m not feeling overly engaged.  Sometimes rolling the rock up the hill just gets too heavy.


It was with this sense of unease that I went to ECOO, but quickly found my happy place again.  From the conversations I had with intelligent, interrogative educators to the fantastically chosen keynotes that went straight after the larger questions around the information revolution we are living through, ECOO does indeed tackle tough issues.

I really enjoyed all three keynotes and they didn’t shy away from asking what education isn’t doing to help our students get ready for a world most of us have no idea is coming. 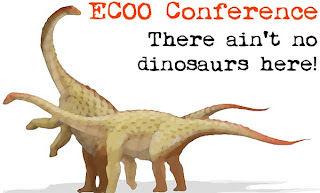 Wired caught up with our ECOO keynotes in their latest issue. Coming back to the 19th Century, factory designed education system hasn’t been easy after soaking in the future for a few days.  ECOO is what education could be like if there wasn’t all the friction from dinosaurs.

If nothing else, ECOO reminded me that change is inevitable and not to give in to the pessimism of bureaucratic thinking.  Being an agent of change is difficult.  There are a lot of entrenched educational interests that have no interest in adapting to change.  After being at ECOO for a few days surrounded by educators who have already made steps into the future I realize I’m not alone in this, and I’m on the right side of history.