My son and I are two up on a BMW F800ST on our way out of Sooke on Vancouver Island’s south coast.  It’s the last big stop before heading into the wild, and it’s not that big a stop.  The road has met up with the rocky shoreline and I’m bending the bike left and right around constant corners, I’m seldom able to see more than a couple of hundred feet down the road.  From the steep hillside down to the Pacific Ocean a deer pops over the barrier onto the road right in front of us.  The BMW seamlessly comes to a stop five feet in front of the startled deer that tears off into the forest.  I wait for the inevitable follow up deer and see it next to the barrier watching us.  We pull away slowly and elect to ease off a bit and keep it under 80 kilometres per hour.  Even at speed limit speeds this road is something special.

I’m supposed to be in class, at work, instead I find myself over four thousand kilometres away from home on a cool and sunny Friday morning at the end of May with a rented motorcycle, beautiful weather and three hundred kilometres of astonishing roads in front of me, sometimes life offers up nice surprises.

I’ve only been riding on the road for just over a year.  I have my M2 license and I left an ‘07 Kawasaki Ninja 650R at home.  The BMW is only the second road bike I’ve ever ridden.  It’s amazing how different two machines that do the same job can be.  The BMW is a bigger bike, with larger seats, it’s much more comfortable according to my pillion.  The suspension is soft and supple compared to my Kawi, and the controls feel lighter.  The clutch take up is smooth and the brakes make me think I need to do the front pads and bleed my Ninja when I get home.  The BMW is a more mature bike in every sense.  The redline is a sane 8000 rpm, and with the soft suspension and big seat it’s easy to ride for a long time.  Other than the weird left hand/right hand indicators it’s an easy transition from the Ninja (one of the reasons I chose it). 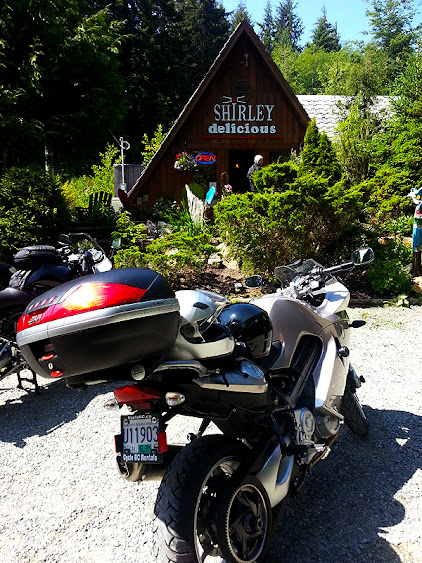 We work our way down this increasingly empty coastal road until we stumble across the small town of Shirley and Shirley Delicious.  We’d been told by the technician at Cycle BC where we’d picked up the bike that the temperature can drop ten degrees on the coast, and he wasn’t wrong.  After a hot coffee warm up and the best sausage roll I’ve ever had, we bump into another BMW rider who is in his seventies.  After some affable, Teutonic chat we are back on the long and winding road.

From Shirley we wind our way north west up the quiet coast of Vancouver Island.  The east coast faces Vancouver and is as busy as anywhere in Canada, but the west coast faces the endless Pacific and remains largely unpopulated.  From Shirley we saw only a couple of other vehicles as we chased the tail of this amazing road that clings to the side of mountains edged by ocean.  The switchbacks that lead down to single lane bridges over mountain rivers look more like Scandinavian fjords than Canadian back roads.

We stop and stretch about forty minutes into the ride at a scenic lookout, which along with many provincial parks, dot the route.  As we clear the straits between Vancouver Island and the mainland and begin to face the Pacific, tsunami warning signs and escape routes begin to appear.  You really get a sense of being on the edge of the world here.  The edge of North America, the edge of the former British Empire, facing half a world of ocean.

Port Renfrew is more an idea than an actual place; a few buildings scattered among the trees.  We pass through it in moments and find ourselves on a rough paved road into Juan de Fuca Provincial Park where we hope to find Botanical Beach.  We strip off the bike gear and stow it in the big Givi box on the back and head down the trail.  The tide is out and an amazing beach full of tidal pools awaits.

We warm up on the long walk down and soon find ourselves clambering over black stone jutting into the ocean.  The sea life is prodigious, with massive strings of clams, crabs and a million other things crawling on the rocks.  The smell of salt and sharp, clean air is magical. We’re the only people we can see.

We spend two hours wandering around the rocks, but I’ve only got the bike for the day and the sun is way past noon.  A quick uphill hike back to the bike has us both sweating.  I figure we should eat and the Coastal Kitchen on the way in looked like a good choice, but my son has a thing for chain restaurants and says he isn’t hungry (though he was).  I don’t get to the Coastal Kitchen, one of my few regrets on this trip. 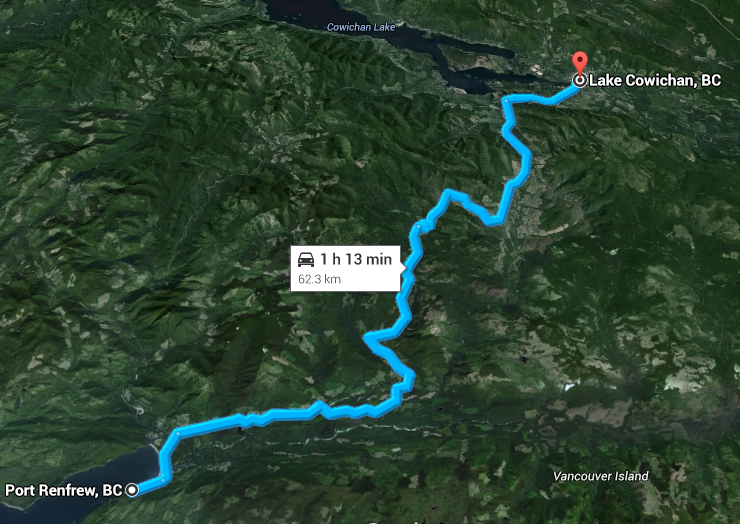 I’m looking at my watch and wondering how I can possibly get back to Victoria since it’s getting on for 2pm and we’re not even halfway around our loop yet.  Lake Cowichan is halfway across the island.  It’s only 63 kilometres away but this road is something else, you don’t make time on it.  Around every corner (and there is always a corner) you find idyllic waterfalls, tumbling mountain rivers and absurdly beautiful alpine vistas.

The BMW is bending left and right over the patchwork surface of the road, the soft suspension soaking up the bumps.  I get into a rhythm and lose myself for a while chasing this road.

Unlike the Ninja, I can barely feel Max back there until he uncharacteristically thumps into me as a I brake for a switchback.  He mumbles that he’s ok, but we’ve been on the road since 9am, he’s had no lunch and he’s dopey, not a good combination.  I push on to Lake Cowichan, now more worried about him than enjoying the ride.  I really wish we’d eaten at the Coastal Kitchen before leaving Port Renfrew, we’re not putting that to a vote next time.

We stop in Cowichan and eat lousy fast food at an A&W.  He perks right back up and we get back on the road quickly because it’s getting on to 4pm and I’ve got less than two hours to return the F800.  But Cowichan marks the return to the populated side of the island and the highway out of it is the first 100 km/hr zone we’ve seen since leaving Victoria.  In a flash we’re back to the Trans Canada in Duncan and, after a day spent virtually alone on twisting roads, we find ourselves in a traffic jam surrounded by box stores.  We wait our way through the worst timed traffic lights ever in Duncan and finally get moving south towards Victoria. 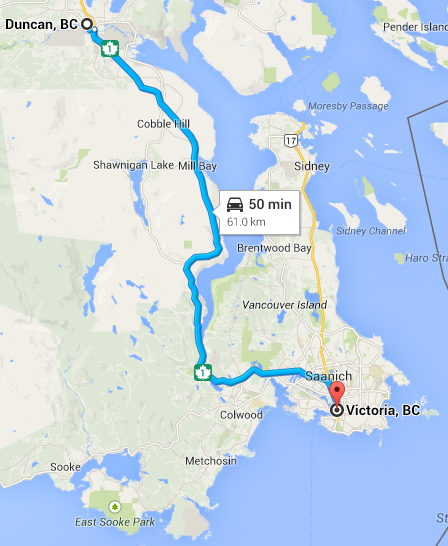 Even a commuter road like this makes most roads in Ontario look sad.  It’s smooth (it barely snows here and frost heaves are all but nonexistent), and the asphalt constantly snakes over and around mountains.  Though very different from the west side wilderness, the highway ride back to Victoria was nice too.

Once clear of Duncan we don’t see another slowdown until entering Victoria, and it isn’t a big slowdown.  By five o’clock we’re pulling back into CycleBC’s downtown shop, tired but elated.  The bike did the whole trip, over three hundred kilometres all told, on a single tank.  It also cast some perspective on my Ninja.

The BMW’s suspension makes me want to look into the Kawi’s, but a 650R is a very different kind of bike than an F800.  Given a choice though I’d take the BMW’s buttery, compliant suspension over the teeth rattling shocks on my Kawi.  I thought the lack of a windshield would hurt the BMW but it was surprisingly good, and makes me question the turbulence I get off the aftermarket windshield on the Ninja.  The weird switch gear on the BMW wasn’t convenient, but all of the controls were light and responsive, making the bike a joy to take down twisty roads.  It all sounds like a slam dunk for the BMW, but there is one place where the my older Kawasaki leaves the BMW behind.

After lugging that BMW engine around for a day I was happy to put it down.  At best it chugged down the road, but most of the time it sounded agricultural.  One of the reasons I fell for the Ninja was the sound of its engine, I’ve seldom heard anything happier.  Whereas the BMW goes about its business with conservative, grim faced determination, the Kawasaki is an eager accomplice, with a soprano’s voice.  While the BMW is grumbling to its redline something magical is happening in the Kawasaki.  Happy up to 8000rpm, it dives to the 11,000 rpm redline with a euphoric banshee wail; the last half of the Ninja’s rev range is something wonderful.  That it also manages to feel stronger than the BMW even though it’s a much smaller lump is also telling.

I enjoyed riding the BMW, but it didn’t move me.  The good news is I now have much higher standards for control feel, brakes and suspension, but without that all-singing engine I’m just not smitten.

As for the trip, it was unforgettable.  From sea to sky and back again, it was challenging, exhausting and completely worth it.  Were I to do it again, I think I’d get the bike for 24 hours instead of 8 and stay over in Cowichan before coming back the other way down the empty coast.  That road deserves two way attention, and I’d happily avoid the traffic in Duncan and the stress of trying to rush the bike back at the end of the day.  It also eat lunch at the Coastal Kitchen, damn it.  The days are long on Vancouver Island in the summer.  If you left at noon on one day, you could meander up to Cowichan enjoy a 10pm sunset and be on the road well after sunrise at 6am the next day looking forward to retracing those mad roads back to Victoria – you’d also miss rush hour on both sides.

CycleBC is located in downtown Victoria right under the conference centre attached to the Empress Hotel.  The staff are quick to get you on the road, know the area inside and out and offer up some great insider tips (why we ended up making a point of seeing Botanical Beach).  They offer a wide range of bikes from the F800ST I was on to a BMW GS, Suzuki Vstrom, Kawaski KLR, Triumph Bonneville and various cruiser options.  Everything looked to be in top form (they have an onsite technician), and the F800 was flawless for us.

If you get a chance to ride southern Vancouver Island, you won’t be disappointed.  Next time I’m out there, I’m looking at a longer ride around more of the island.