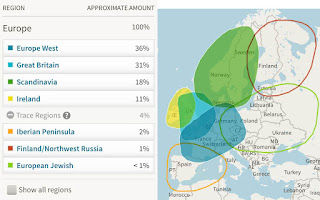 My lovely wife convinced me to do the Ancestry.com DNA test.  Being very British, the results that came back were a bit surprising.  Genetically speaking I’m the result of the fact that Europeans love to get to know each other intimately.

My people are from Norfolk on the east coast of the UK, so a strong Scandinavian influence was to be expected (damned vikings!), but the rest is interesting.  I had no idea we were part Irish (evidently everyone is), and the trace bits at the bottom are also cool.  Realizing I’m made up of all these different cultures feels good. 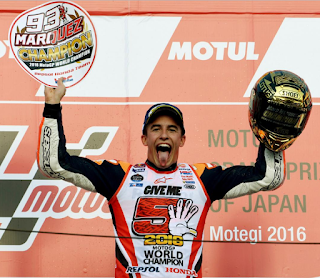 I other news, Marc Marquez just won the MotoGP championship in Motegi, Japan.  I started watching MotoGP during Marc’s first year in the championship and it was thrilling to watch this astonishing talent blossom even as I was getting acclimatized to motorcycle racing.  It was hard not to become a fan.  I remained a fan up until last year when Marc made a young man’s mistake.

If he’s fighting for a championship, Marc parrots words of respect. but only because he’s going to win it.  When he’s out of the running his arrogance comes through and it isn’t pretty.

I find it hard to support a guy who thinks he’s more important than the battle itself.  Motorcycle racing is Hemingway-esque in the demands it places on participants.  If you do it wrong it will kill you.  When doing something that potentially lethal well you need more than quick reflexes and arrogance.  The world is full of fast, dead motorcycle riders.  Motogp, being the very pinnacle of motorcycle riding, should present professionals who respect the dangers of the championship they are chasing.  What Marc did last year in Sepang suggests that he thinks himself superior to others who face the same peril.  A rider who thinks he can dictate the outcome of a championship he can’t win is not only arrogant, but dangerous.

If you’re going to stare death in the face with only your reflexes to save you, you should approach your work with a degree of respect and humility.  I just finished the Australian GP, and watched Marc toss his Honda into the countryside while leading.  He’s far from perfect, though still no doubt a once in a generation talent.  I’d like to be a fan again, but not if he’s going to disrespect the brave thing these riders are attempting.

Now that I’m 2% Spanish and we’re coming up on the anniversary of Sepang, I want to say something to my countryman:

“Marc, it’s not your place to dictate the outcome of a championship for anyone but yourself, and there’s something to be said for apologizing.  I want to be a fan, but unless you’re going to respect the battle you’ll never be more than an ego with quick reflexes.

One day, as you get older and slower, you’ll be tempted to apologize for what happened in 2015, but when someone irrelevant tries to apologize in order to remain relevant it’s just another expression of arrogance.  Now that you’ve got another championship, and as MotoGP heads to Sepang again, it’s time to take on another dimension as champion and speak for the championship itself.  Perhaps you can direct other misguided young men away from disrespecting the thing you’re all fighting for.  We’d all thank you for it.”