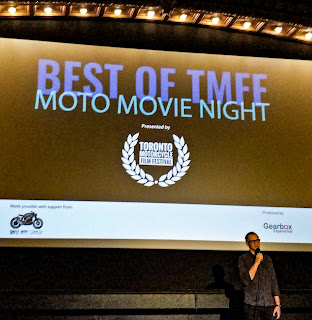 The other day I did a ride that isn’t typical of my time on two wheels – I aimed for the middle of a city, during rush hour.  The siren call for this insanity was strong.  The Toronto Motorcycle Film Festival was having a best-of showing at the beautifully restored Playhouse Theatre in Hamilton.


From TMD you’ll know I’m a big fan of motorcycle media and the TMFF’s push to encourage Canadian films is something I’d like to both support and participate in.  Riding down to Hamilton on a beautiful summer’s day was the perfect entry point and has me thinking of ways to get to their main show in Toronto in early October.  I’m secretly hoping I can find a project that needs a drone pilot aerial camera operator and likes weird camera angles. 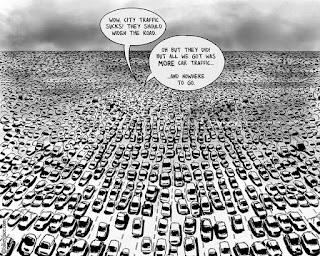 But first, the peril.  Driving in rush hour isn’t like driving at other times.  The people doing it are miserable, embroiled in the last part of their forced servitude for the day, the part where they get to spend a sizable portion of their time and income in a vehicle that has become an expensive appliance whose only function is to move them to and from the job it demands.  The aimless frustration and misery oozes out of them at every turn, sometimes expressing itself in sudden bursts of anger and aggression before settling back into a miasmic death stare of indifference.


So that was making me anxious.  Looking at Google Maps red roads of the GTA at rush hour on a warm, sunny day wasn’t thrilling either.  Sitting in traffic on a motorcycle in moribund no-filtering Ontario sucks.  It sucks on the fumes of the massive SUVs all around you, their contents breathing filtered, air conditioned air while you choke on their output.  Edging toward a green light inches at a time on hot tarmac surrounded by this excess and misery is about as much fun as a deep periodontal cleaning, without the benefits, and with the destruction of nature as the result of this pointlessness.


I haven’t had much time on the bike this summer.  My wife’s surprise cancer diagnosis and surgery has meant other priorities take hold.  Finally back from weeks in a car, I was facing my first long ride in over two months, and it wasn’t for the ride, it was for the destination.  Alanna wanted to ride pillion down, though she’s still recovering.  I was worried about her, feeling very over protective and also dealing with my son’s anxiety in us going after being away at camp for the first time this summer (don’t worry, we’re coming back!).


That’s a lot of emotional luggage to take on a ride.  Even leaving our subdivision I was second guessing traffic and riding awkwardly, and getting frustrated with myself for it.  I’m usually loose and light on the controls.  I’m usually not stuck in a conscious state while riding and I’m usually smooth and fluid as a result.  We worked our way down to the dreaded Hanlon bypass in Guelph (which isn’t because it’s covered in traffic lights)  and sat in row after row of the damned things every few hundred metres.  I was constantly placing us on the road where I could squirt out of the way of someone not paying attention.  We passed two collisions, rear enders caused by the epidemic around us.  Sitting up high on the bike has its disadvantages, like seeing down into the vehicles around us and watching over half of the drivers working their phones on their laps.  I guess that’s the new normal in a 2019 commute.


Down by Stone Road the guy behind us didn’t stop (he has a nice iPhoneX on his lap), but I squirted out onto the shoulder and took the next exit where we worked down country side roads instead, but not before being choked to death by a diesel black smoke belching dump truck that jumped out right in front of us causing me to brake so hard we bumped into each other.  I finally got past him after riding in his bleching, black haze for several kilometres, but by this point I was fried, and we’d only ridden through Guelph, the small city before the big one.


I was going to pull off at the lovely old church in Kirkwall and have a stretch and get my head on straight, but the F150 dualie behind me was about six inches off my rear tire even though I was going 20 over the limit and I was afraid to hit the brake, so pressed on.  He blew past us coming out of Kirkwall only to pull up behind the car 150 metres ahead of us and stay there until he eventually pulled off some time later.  You gotta make time on your commute I guess.


Doubt isn’t something that creeps into my riding, but it was starting to here.  The lack of control and extremely defensive mindset was exhausting me.  Alanna was suffering hot flashes on the back mainly due to Guelph’s atrocious traffic and lights and was feeling wobbly, and I was starting to question everything I was doing.  We are coming home Max.  This isn’t going to end badly! 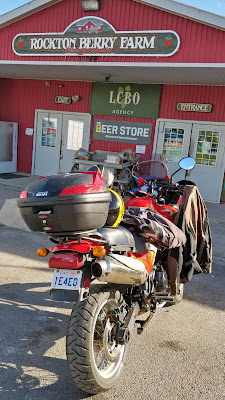 We were both on the lookout for a place to stop when the Rockton Berry Farm appeared as if an oasis in the desert.  I pulled in and we both pulled our sweaty, tense bodies off the Tiger.  Alanna went in and found some sustenance and I did some yoga.  After stretching and some Gatorade and trail mix I felt human again.  Talking to Alanna I mentioned how I was battling some demons on this ride and reminded myself that the best kind of rider is the Zen rider.  Matt Crawford describes motorcycling as a beautiful war, but this one was more like a pitched battle.  It’s amazing what a stop can do for your mental state though.


After a fifteen minute break we saddled up again ready to face the horror of Hamilton’s rush hour, but something had changed.  Instead of holding on too tight, I was letting go.  My riding was more fluid, we flowed with the chaos and when we got down to the mean streets of downtown Hamilton, they were a delight.  Unlike Guelph, who seem determined to stop you at every intersection, Hamilton actually times its lights so you can cut through the heart of the city with barely a stop.  Past the beautiful old houses and industrial buildings we flew, down to the up and coming area where that beautifully restored Playhouse Theatre sat.

As we pulled into the parking lot that was already filling with all manner of motorcycles, I thought over that ride down. I’d actually suggested that maybe we should take the car, but that would have sucked just as much and had no sense of adventure and accomplishment in it, though it would have been easier and safer – the motto of modern day life. 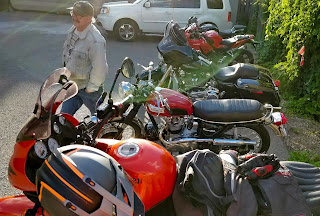 If you’re in a situation where you’re riding and finding it overwhelming, take a break and give yourself a chance to get your head back on straight. You’d be amazed what a ten minute stretch and reset can do for your mindset, and that mindset is your greatest tool when riding.  In spite of her cancer recovery, Alanna had pushed to ride because she wanted us to ‘immerse ourselves in that biking culture’ in going to this event.  Standing in the parking lot chatting with other riders, we were doing just that. 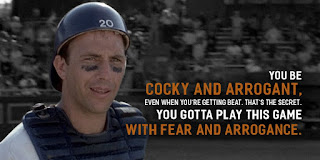 I’ll cover the film night in another post, but the ride down was a reflective opportunity I couldn’t pass up.  In Bull Durham, Crash Davis talks about how you go about the difficult job of being a professional athlete.  You’ve gotta have swagger, even when things are going against you, and that’s equally true in motorbiking.  After this ride, I can see why many people who otherwise enjoyed it gave it up.  That fear, once it worms its way inside you, will talk you out of risk no matter what the reward. 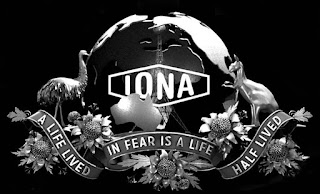 Of course, the point isn’t to not feel fear, but to feel it and work through it anyway.  That’s bravery.  Not feeling fear at all is psychosis.  Baz Luhrman has a good take on this with his motto:  a life lived in fear is a life lived.  Letting fear dictate your life is no way to live.  We are already dead when we always play safe and stop taking risks.


What made it especially challenging this time was that I couldn’t moderate many of those risks by riding away from the faceless hordes of commuters.  Spending a day with them in their pointless battle to destroy the planet was exhausting and terrifying, no wonder they box themselves up in the largest container they can. 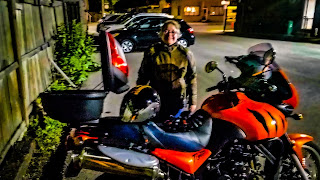 The motorcycle films shown by the TMFF were great and completely new to me (and I’m a guy with Austin Vince’s entire DVD collection – I know moto-films).  One of my favourite parts of this kind of documentary film making is showing what is possible, and I was briming over with it when we left.  I couldn’t have been in a better mood to ride.


We exited into the dark for the long ride home.  It was cool and the streets were flowing and half empty as we worked our way back to the highway and shot up into the dark of the Niagara Escarpment.  Even the guy driving 10 under the limit who suddenly stood on the brakes for no reason (he had evidently received an exciting text message – he was two handing a response as we passed him on the inside lane of Highway 6) didn’t phase me.  I was back on my game, staring into the dark out of my third eye.  When that eye gazes into the abyss, the abyss is the one that gets nervous. 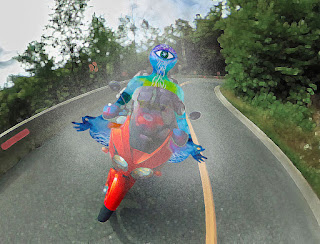 We got all the way up to Guelph, sane now that traffic had died down and all the sad people were in their row houses waiting for tomorrow to do it again.  If we’re so smart, you’d have to think we could find a better way.


Shakespeare Arms by the university we met at over twenty years ago provided us with a late night dinner before we pressed on home, passing a skunk (the Canadian night is filled with them) galloping across the road into the graveyard ahead of us.  The last light (of course) caught us, then we were away into the night, the Milky Way glittering above us and the night smells all around.  We were home seemingly seconds later, our creaking, cold joints groaning as we finally seperated ourselves from our trusty Tiger. 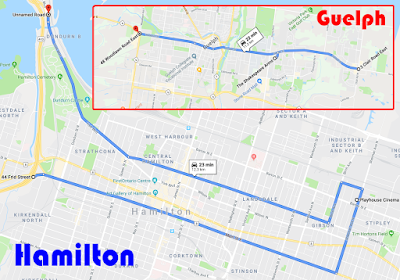 We rode right into south central Hamilton at rush hour and out after 9pm, about 12 kilometres of dense, urban riding with more traffic lights than I could count, but we got stopped at three of them both coming and going.  I commented to Alanna about how Hamilton has its shit together in a way that Guelph seems oblivious to.


Passing back through Guelph past 10pm at night and covering about a kilometre less in a city with less than a quarter the population, we got stopped at nine traffic lights.  On our way south earlier in the day during rush hour, Guelph was a traffic light bonanza (even on the ‘bypass’) getting stopped at no less than six lights before we could escape the madness.  Guelph should rename itself the city of lights, just not in a Parisian sense.


Perhaps the moral of this story is really just don’t go anywhere near Guelph if you can help it.  It’s time they started urban planning like the city they have quickly grown into.  It’d make the chaos that much less overwhelming (not to mention, ya know, stopping the iminent demise of the human race).  There’s this thing called IoT and smart cities?  Guelph should look into it – I’d be happy to help.