I’m currently crossing the Canadian Maritime provinces with my wife.  She’s recovering from cancer so a bike trip wasn’t in the cards, but I’m using the trip as reconnaisance for future rides. 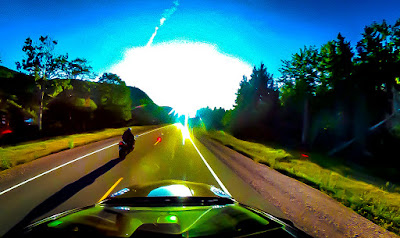 On our way back to our hotel after a day on the Cabot Trail in northern Nova Scotia on Cape Breton Island, a guy on a Honda Repsol race replica blitzed through a row of traffic five cars at a time and disappeared down the road.  The Cabot Trail attracts that kind of rider with its hundreds of kilometres of twists and turns over the Cape Breton Highlands in the north west corner of the province.


Coincidently, while I was out here, Canada Moto Guide did a primer on how to ride the Cabot Trail.  That and the steady stream of bikes making their way up to the remote, north-west corner of Nova Scotia cemented the trail as a Canadian riding icon in my mind. 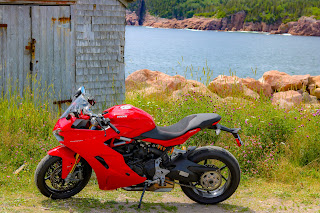 We were up in Neil’s Harbour when a bunch of guys in full leathers wandered in to the Chowder House up by the lighthouse (you can write sentences like that when you’re on the Cabot Trail).  The bravest of them was on a Ducati.  I say brave because the road itself is indeed a roller coaster, but it’s also pretty rough in places.  I asked them if they could put a knee down or would they knock their teeth out first.  They laughed and said they pick their moments.

The Cabot Trail traces most of the coast of the north-west side of Cape Breton Island.  This 300km loop takes you up and over the Cape Breton Highlands and through a national park; it’s stunnlingly beautiful and it’d be a shame to rush it.  Actually, what would be a shame would be only doing it once while focusing on the road.  The ideal way to tackle the Trail would be to get yourself into one of the many lodging opportunties on the south end of it and then do a day focusing on the road followed by a day focusing on the many stops available.  If you came all the way to the end of the world in Cape Breton and didn’t bother taking side roads to things like Meat Cove and Neil’s Harbour, you’d be missing some wonderful opportunities. 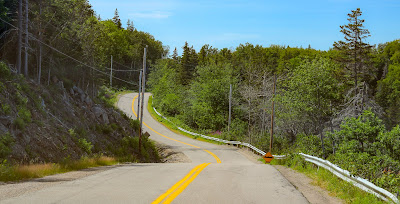 There are many sections with good pavement and astonishing curves, but there are others where the road hasn’t had any attention in some time and Canadian weather has had its way with it.  I was told there were some switchbacks where riders had a hand down on the ground as they came around, but trying to do that in other places would have had you bouncing out of your seat and kissing a guard rail.  Rough or not, if you’re used to living on a tiny island with sixty million people on it, you’ll find the Cabot Trail frighteningly empty, even in mid-summer. 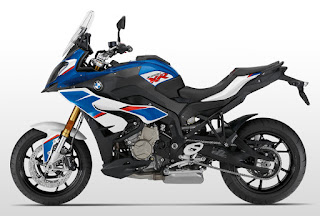 Having done a lot of miles on Canadian roads now I’d approach it as I do them all: enjoy them while you can but expect them to go to shit at any second.  Something with supension travel and some athletic intention would be a good place to start, it made me miss my Tiger sitting in the garage over two thousand kilometres away in Ontario.  A psychotic mix of power and suspension flexibility like the BMW S 1000 XR adventure sport would be good.  Another angle would be to take one of the newest intelligently suspended bikes and see what they make of it.


This ain’t no butter smooth Spanish road, but it’s a fearsome thing.  A couple of years ago Performance Bikes put their man John McAvoy on a sportsbike and pointed him at Spain, in the winter.  It was a riot to read him navigating snow storms through France before finding the sweet never-ending summer of Spanish roads at a time when everyone else is huddled in their houses waiting for the snow to end.  Reading Johnny in questionable riding circumstances is never dull.  PB (now a part of Practical Sportsbikes) should send him out to Cape Breton for a tour of the Cabot Trial in the fall.  It’d deliver demanding and stunning riding and photo opportunities that no one in mainstream motorcycle media seems to be aware of.  It’d also give Johnny a chance to practice his Gaelic.