I’m up into third gear coming up on the cones fast. The wind is pressing into my chest and starting to roar around my helmet. On this introduction to motorcycling course this is as fast as we get going, I’m probably doing about 45km/hr.  As my right hand rolls off the throttle and reaches for the front brake my left hand reaches out to the clutch lever and begins squeezing. As the engine disengages my left foot begins tapping down the gear shifter and my right foot is already on the rear brake and squeezing in time with the front brake, hauling the bike down from speed in surprising time.  As the bike slows, the centrifugal force of the wheels spinning aren’t enough to keep the bike balanced any more, my backside and legs are also subtly beginning to balance the bike.  I’m now only doing about 5 km/hr as I enter the turn but this is a tight box of cones leading to ninety degree left exit.  I turn the handle bars into the corner, trying to keep my eyes up instead of looking in front of the wheel.  At that mom 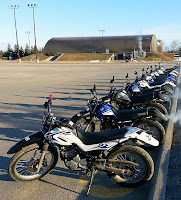 ent I realize I don’t have enough momentum to get through the corner, I’ve scrubbed off too much speed.  I let go of the clutch in the middle of a sharp, slow speed left hand turn, dumping the bike into first gear, it’s a jerky exit I make as I dump the clutch clumsily and begin to regain some lost momentum.

At the motorcycle course I just took many of us went from never having sat in the saddle to realizing just how complicated riding a bike is.  Unlike a typical car with one hand on the wheel and one foot operating pedals, you’re using all four limbs and your body mass as a whole when riding a bike; it’s a surprisingly aerobic exercise.  At the end of the first day, 2-3 hours in the class room, 7+ hours in the saddle, I was exhausted.  The physicality of it is one thing, then there are the mental demands, especially when you’re new. 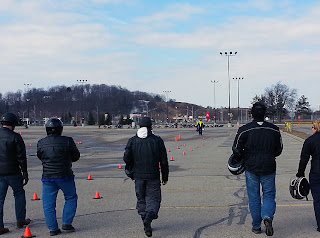 An instructor told us of a new rider who had just finished the course and decided to drive his new bike out to Alberta for a job.  It was all very romantic.  He never made it out of Ontario.  The truck driver saw him coming from miles away, he even managed to slow down and stop completely when the kid on the bike, in the oncoming lane, plowed into the front of the truck at high speed… asleep on the bike.  Riding a bike is a good bit of exercise when you’re experienced.  It verges on a mind and body marathon when you’re new and having to think about everything you’re doing.

In addition to the technique of operating a vehicle that asks you to steer with your whole body, change gears manually using both hand and foot, and operate two sets of brakes independently, again, using both hand and foot, the bike rider is also developing a constant 360° awareness of what is happening around them.  Your head is a on a swivel, you’re constantly assessing threats and dangers.  It matters much less who is at fault if you’re in an accident on a bike, it isn’t likely to be a fender bender you drive away from.  Defensive driving on a bike takes on dimensions that car drivers would find extreme locked away in their metal boxes. 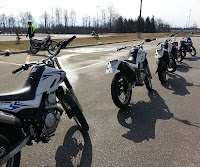 After a weekend of getting familiar with the basic operation of a motorbike, my back is sore, my arms ache and I’m still getting over the wind/sun burn, but it was a purging exercise.  If you ever wanted a challenge that puts you into a very intimate relationship with a machine, motorbiking is that.  It isn’t easy.  It’s demanding mentally and physically and requires your undivided attention.  You can’t walk into it after drinking, drugs or even emotionality and hope to do it well enough to not be at risk, and the risk is about as high as it can get.  In a world of safety at all costs, insurance company run nanny states, I’m kind of surprised that motorcycling is still allowed, but I’m glad it is.

Riding is a Zen thing that demands you surrender distractions and live in that moment, your whole body and mind deeply involved in the task before it.  It’s a task that rewards you with a sense of freedom and the thrill of open speed that I’ve never experienced in any automobile; it’s the most honest form of motorized transportation, which is exactly why I answered the call.  Taking the course made me realize that motorbiking was everything I’d hoped it would be.