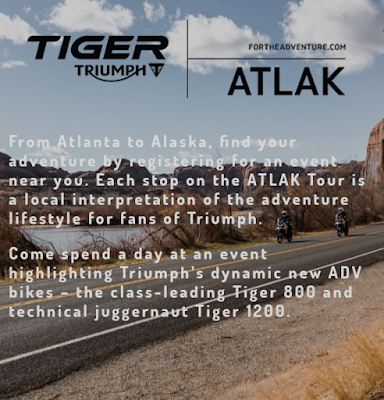 The day after my Kawartha Highlands Loop I made my way north into the fancy cottage country of the Muskokas looking for Triumph’s ATLAK tour Southern Ontario stop.  It says Toronto on the poster, but Torrance is over two hours and two hundred kilometres north of that.


A chance to ride the new Tigers was very enticing so I set off with high expectations.  I’d filled up on the way in to the cottage two days earlier then done the big loop around the Kawarthas the day before.  Just after 11am I set out on hot, July Saturday with the gas gauge just above the empty bar figuring I’d fill up when I came across a gas station on the 140+kms ride up there.


From near Bobcaygeon I made my way through Kinmount and Norland on the twisty Monck Road/County Road 45.  Still no gas in sight, but I was having a good time with the light and frisky Tiger.  By the time I headed north on the 169 past Casino Rama I was astonished that I wasn’t stranded yet, and the fuel light still hadn’t made an appearance.  I was through Washago and onto Gasoline Alley on Highway 11 and still nothing, but if I ran out of gas on Gasoline Alley it would have made a good story.

I finally pulled into a Shell on the side of the highway just past noon, still with no warning light on.  The 24 litre tank took just over 22 litres, so I still had some wiggle room.  At about 460 kms on 22 litres of fuel, the Tiger, with 250lb me and two panniers with tools and rain gear in them managed over 49 miles per gallon (4.8 litres per 100kms), that’s within one mile per gallon of a Prius, and I wasn’t riding it gently.  I’m not sure how much fun driving a Prius is, but it’s never doing 0-60 in four seconds like the Tiger had been, and the Tiger isn’t a black hole of resource production in its manufacture. 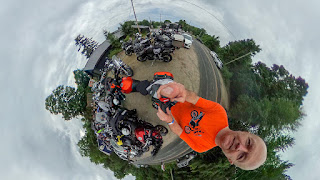 I pulled into Clear Lake Brewery in Torrance, just west of Gravenhurst, at about 1:30pm.  I’d missed lunch, but wanted to get there early and get signed in.  There in lay my only mistake on this trip.  I’d foolishly assumed that Triumph turning up with a bunch of Tigers would mean an opportunity to ride them.  I’d done this with Kawasaki previously, so it didn’t seem like a crazy idea, and with details like, “Come spend a day at an event highlighting Triumph’s dynamic new ADV bikes – the class-leading Tiger 800 and technical juggernaut Tiger 1200.  Register today for an adventure of epic proportions.”  can you feel my confusion?  Surely an epic adventure implies an opportunity to ride, no? 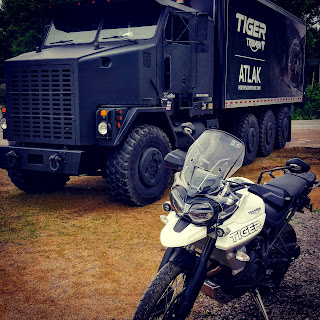 After milling around for an hour and half in alternating patchy rain and then extreme humidity while watching Clinton Smout disappear on a variety of different Tigers, I was starting to wonder if I’d misunderstood the intent of this event.  A microphone was set up, but no one was using it.  We’d been handed out wrist bands and a swag bag of Tiger stuff, which was cool, but I was still waiting for someone to pick up that mic and start the thing.  A few people commented on my old Tiger (the oldest there by a decade, easily), but for the most part the majority of people showed up in like new, matching, name brand adventure wear on twenty grand, low mileage bikes and walked right by it.  They seemed happy to stand around talking a good ride, but that isn’t my thing.


It was the last weekend of the World Cup on a summer weekend, so the Brewery was packed with people.  Trying to get a table, let alone something to eat (evidently what our wrist bands were for) wasn’t likely without a big wait.  I finally overheard one of the organizers say, “it’s just a meet and greet with a chance to see the new Tigers and talk about riding opportunities in the area.”  The “epic adventure” was a show and tell?  After hearing this I was back at my Tiger in seconds getting packed up.

Before I left I figured I’d get some Clear Lake Brewery beer having never heard of it before, but the fridge in the entrance  was empty.  A quick trip  to the toilet and I was ready to make some tracks.  Someone had parked in front of me, but I backed the Tiger up the hill by the handlebars and saddled up.  Getting some Triumph swag and looking at the new Tigers was nice and all, but it wasn’t what I thought I was doing that day.  I’m not a big fan of sitting around talking about motorcycles, I prefer to be riding them. 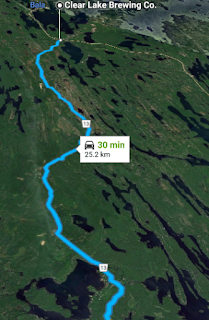 On the way in I’d noticed Muskoka District Road 13 cutting south around the lakes and rocks of the Canadian Shield out of Torrance.  It was well past 3pm and I hadn’t eaten anything since that morning, but I knew steak was waiting for me at the cottage so I figured I’d just push on.  13 is a roller-coaster of a thing and a delight to ride.  Like all Ontario roads, some parts of it are so rough you’re better off on a long suspension bike just to get over it, but other parts were smooth and very entertaining.  If you’re in the area it’s well worth the ride.  There’s me talking about nice rides in the area for ya.


The highway portion of the ride was only about one exit long and I was back in Washago before I knew it.  I stopped at the massive LCBO off the highway (probably there thanks to Casino Rama being nearby) and finally got some beer, then retraced my route back out of Muskoka and across the Kawartha Lakes, this time with a full tank and no anxiety.  I ended up stopping once in Norland for a fruit filled tart and a small coffee before finishing the ride into the woods and back to the family cottage. 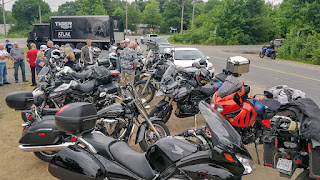 I’ve got no regrets in making the ride up to Torrance.  It was cool to see the new bikes but baffling to not get to ride them (unless you’re Clinton Smout).  The ride up and back was entertaining and the Tiger hat is one of my son’s favorites now, so that’s a win.  Knowing then what I know now, I’d still probably have made the trip up there anyway, but it sure would have been nice to see how Triumph Tiger state of the art had moved along in the fifteen years since my bike came off the production line.


Sometimes it’s the expectations that let you down rather than the thing itself. 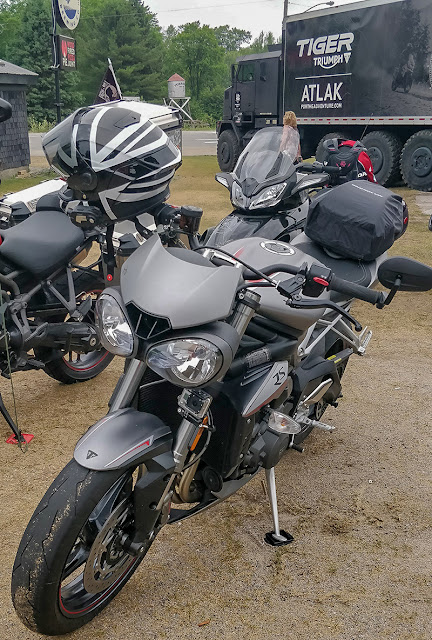 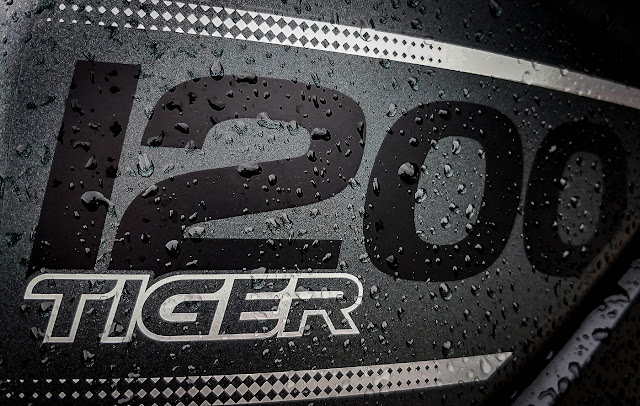 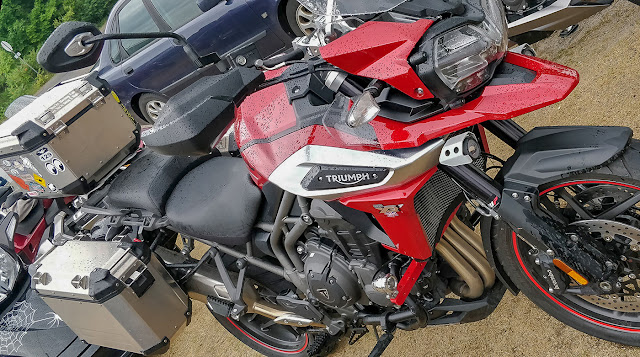 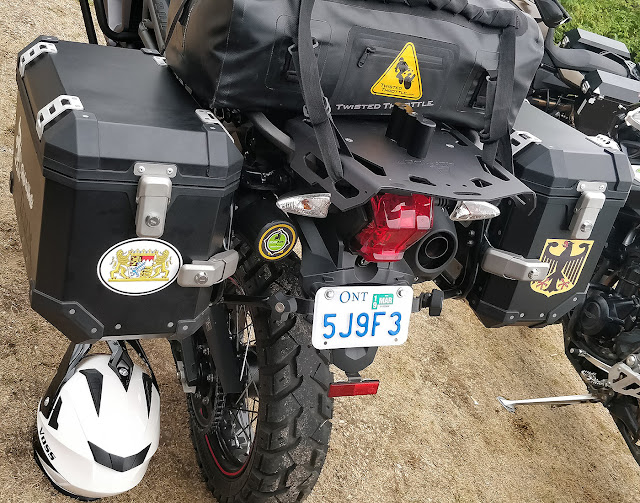 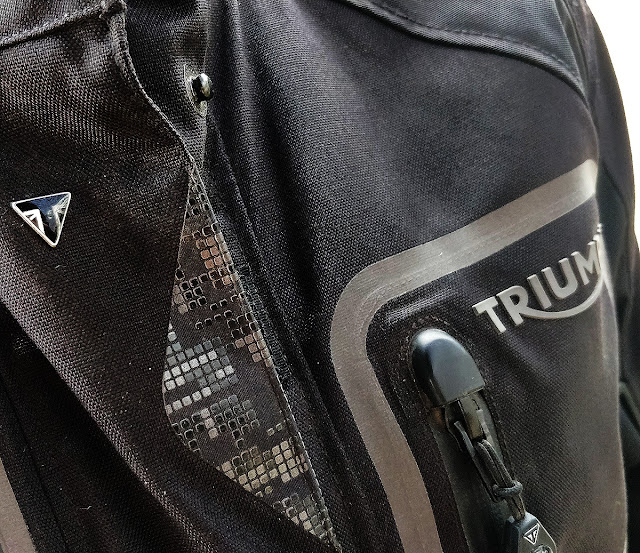 … and from the ride back down Muskoka Regional Road 13 and home: