After our horse ride in the Arizona desert we took the rental SUV down the Bush Highway and into Apache Junction for dinner.  Over one of the many hills we came upon a dozen emergency vehicles with lights blazing.  The road was closed down to one lane.

As we crept past we cleared the ambulance in the middle of the road and a rider came into view.  He was sitting in the middle of the pavement my son and I had ridden down a couple of days before, his GSX-R a pile of broken plastic and bent metal on the gravel shoulder.  He’d obviously been thrown clear of it.

He was sitting up because he was wearing a full helmet, armoured leather jacket, pants and boots.  ATGATT meant this was an expensive crash, but not an overly injurious one, he looked winded and freaked out, but paramedics won’t have you sitting up unless they’ve ruled out a lot of more serious injuries. 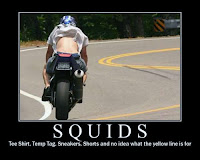 Helmets are optional in Arizona.  If this guy had come off at the speed he was travelling (he ended up a good sixty feet away from the bike) without a helmet he wouldn’t have been sitting up.  He also would’ve left a lot of skin on the pavement if he wasn’t wearing armoured gear.  As it was he looked cut free.

There might be a sport bike argument to be made here.  Cruiser riders may ride around in t-shirts and no helmet in Arizona, but then they don’t try and tackle the bumpy, undulating Bush Highway at high speed either.  If you’re going to ride a sports bike aggressively, full gear seems like an obvious thing to do.  Exploring the limits of said sports bike on a bumpy, poorly maintained desert road with a patina of sand on it might not be such a bright idea either; that’s what track days are for.

I didn’t start riding until my forties.  I could have started in my twenties when I had fewer responsibilities and much more free time, but a bad crash at work put me off it again.  Every time I see a rider down my heart jumps into my throat.  I want them to be ok, but I also don’t want it to be the result of a stupid decision they made.  Every time that happens someone like me is shaken off the idea of riding, which means they are missing out on a magical experience.