I cranked out some miles on the Tiger this weekend.  On Saturday it was a 160km round trip down to Ancaster for a conference, on Sunday I left with a buddy from work along with his wife and son on a big 260km loop out to the Niagara Escarpment and back.

Jeff was two up on his new-to-him Goldwing and he son was on his dad’s Super Ténéré.  We left Fergus following the Grand River and immediately came upon two cruisers burbling down the road next to each other.  Any questions I had about passing etiquette on other bikers were quickly put aside when Jeff dropped a gear and blew by the two of them without a second glance.   They (politely) went into single file so that we could catch the fleeing Goldwing without crossing a solid line.

Elora to Creemore happened in a snap and the Tiger was becoming more and more familiar with each mile traveled.  Chasing the Noisy River into Creemore was well timed on empty roads and the Tiger and I had no trouble keeping up with the more experienced riders around me.

We stopped for lunch in Creemore and then helped a Harley rider try and jump start his dead, brand new bike (his typical Sunday ride, but I like my dependable, thirteen year old Triumph).  He eventually found a local who offered to jump start the bike from a truck.  After working up a sweat pushing a Harley up and down Main Street for a several minutes in our modern, textile body armor (while being watched by groups of leather clad bikers who I’m sure felt great kinship with the old fella whose bike wouldn’t start, but not so much that they wanted to help), we headed south toward River Road.

The River Road was a twisty delight.  Riding a bike is a fine thing, but the moment I’m off the crown of the tire I feel like I’m earning bonus points.  At my first training course towards the end of day two they set up cones and we were allowed to weave through them at speed and then ride a decreasing radius circle.  I stopped at one point and said to the instructor, “I could do this all day!”  The lean of a bike is nothing short of fighter-pilot magical (even Top Gear digs it).

River Road was a rollercoaster ride until we once again arrived on the tailpipe of a cruiser.  On any straight this guy would gun it, making a pass impractical (200km/hr passes, while possible, aren’t wise on twisty country roads).  We spent the last bit taking the corners at floor board friendly speeds.

In Shelbourne there was a big, new sign advertising the Veteran’s Highway pointing south, so rather than go over to the overcrowded Highway 10 I thought we should try it.  The moment we were past the last factory two hundred yards down the road the “Veteran’s Highway” turned to dirt.  The Tiger seemed frisky and excited to be on the loose stuff, feeling very sure footed for such a big bike.  Behind me the Super10 was also rolicking in the gravel, but the two-up Goldwing?  When we stopped Jeff referred to it as an adventure two-up mobility scooter.  We turned left toward the highway at the first paved intersection.


Back at Highway 10 I once again suggested we push onto unknown roads in northern Mono Hills.  This road also quickly turned to gravel, but this time loose, twitchy gravel.  I’m bad at picking roads.  We ended up turning around and heading back to 10 before burning south and enjoying some time in Mono Hills and Hockley Valley.

We wrapped up the ride with a quick blast down the Forks of the Credit, which had the road closed into Belfountain, before heading back to Elora in lengthening shadows.

I got home sun and wind burned and wonderfully exhausted.  Can’t wait to do it again! 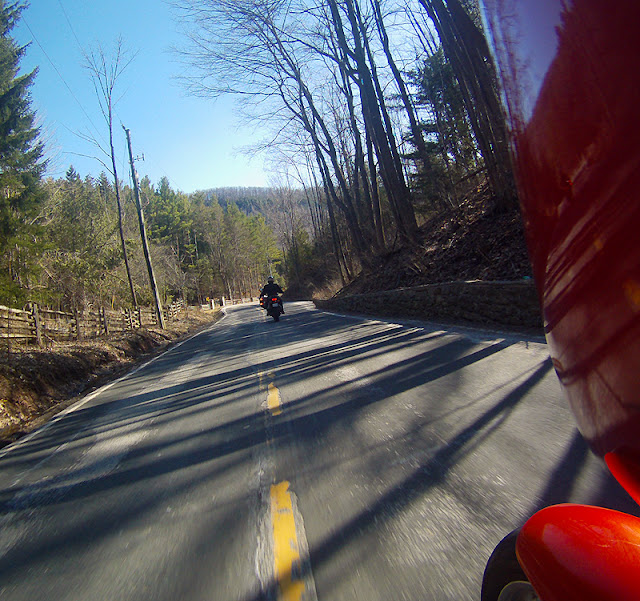