I’m watching Morgan Freeman’s Through The Wormhole again.  This particular show is all about whether or not luck exists.  In the episode they introduce the concept of micromorts – a unit of measurement based on chance, in this case a one in a million chance of instant death.  Using statistics, the micromort allows you to assess the risk involved in various activities based on your chances of a fatality.


Needless to say, motorcycling is up there.   Compared to other forms of transport shown, you earn more micromorts motorcycling than just about anything else.  Of course, you have to remember that being alive costs you micromorts each day (and more each day you get older).  Sedentary activity?  Smoking?  Drinking?  They all get you.

When you get into extreme sports the micromort count skyrockets.  Ever felt the urge to climb Everest?  That’ll cost you about 40,000 micromorts, or 266,666 miles on a motorbike.  Of course you’d spend a couple of weeks climbing a mountain or years on two wheels racking up a quarter of a million miles.  Funny how one thing is considered brave and noble and the other reckless.  Of course, riding a bike also uses less fossil fuel to move people around, while climbing Everest creates an environmental disaster. 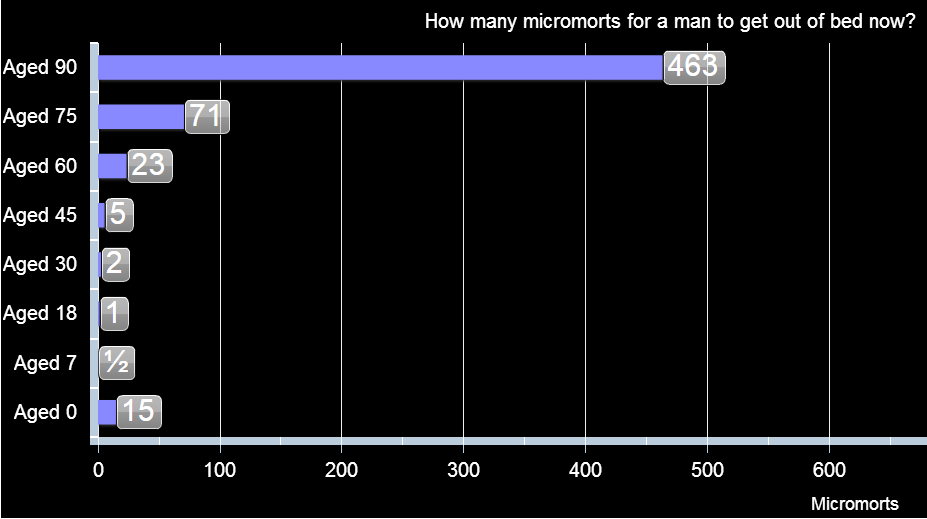 One of the hardest things to wrap your head around with micromorts is how they change over time.  As a baby you’re small and weak and much closer to death.  Through your middle years you’re stable and as far from death as you’ll ever statistically get, but as an older person you face death more and more each  year.  Considering that, you have to wonder why more older people don’t get into biking.  Just waking up the in morning in your sixties nets you more micromorts than a hundred miles on a bike.  If you’re facing that long good night anyway, do not keep trying to turn away from the inevitable hoping to go gently.

The point of us being here isn’t to be here for as long as possible.  Motorcycling, more than anything else, will remind you of that every moment you’re in the saddle.  There are some things than cannot be reached without risk, and they are usually the best things.  If I’m going to rack up micromorts anyway, I’d rather be doing it on a motorbike. Do not go gentle into that good night,
Old age should burn and rave at close of day;
Rage, rage against the dying of the light.

Though wise men at their end know dark is right,
Because their words had forked no lightning they
Do not go gentle into that good night.

Good men, the last wave by, crying how bright
Their frail deeds might have danced in a green bay,
Rage, rage against the dying of the light.

Wild men who caught and sang the sun in flight,
And learn, too late, they grieved it on its way,
Do not go gentle into that good night.

Grave men, near death, who see with blinding sight
Blind eyes could blaze like meteors and be gay,
Rage, rage against the dying of the light.

And you, my father, there on the sad height,
Curse, bless, me now with your fierce tears, I pray.
Do not go gentle into that good night.
Rage, rage against the dying of the light.