Skip to content
I recently saw this on the Science Channel’s Through The Wormhole with Morgan Freeman.  I really enjoy the show, but I’ve gotta call you on this one Morgan.
Let’s look at some of the statistics given:
For the UK:  motorcycles make up less than 1% of motor vehicles on the road but they are 14% of total deaths/serious injuries.
Considering that bikers have no cage around them to mitigate their own poor driving habits I’m surprised that they are only 14% of serious accidents.  There is no doubt that if in an accident bikers are more likely to be injured; bikes don’t have fender benders.

Riding well demands a level of defensive awareness foreign to most drivers.  A good rider is attentive to the threats around them and deeply engaged in the operation of their vehicle beyond what most people are capable of.  The only time I came close to that level of intensity driving was in a shifter cart in Japan and during track training at Shannonville.  Day to day driving is a simple, safer operation by comparison, but does that mean it’s better?

A motorbike rider doesn’t get on a bike to test fate or ignore statistics, bikers know how dangerous what they are doing is.  There is a difference between doing something that is bad for you (smoking, etc) and developing a complex skill in a challenging environment.  Like other athletes or sportsmen, the motorcyclist is developing their craft in an unforgiving environment.  To say that they are ignoring the reality of statistics is reduction to the point of absurdity.  Not to mention that statistics themselves aren’t reality, but a vague mathematical representation of it.  If there is a reality it isn’t to be found in a human abstraction.

Is biking more dangerous?  No doubt, but this reality episode is choosing to selectively chose their realities.  Chasing all motorcyclists onto four wheels because it’s safer isn’t really safer.  Why don’t they take into account how dangerous it is to drive a massive SUV that is actively destroying the ecosystem we live in with its atrocious waste of resources?  Or mention the political and financial instability caused by big oil and OPEC?  If there were less people driving around in three ton tanks there would be fewer severe accidents.  You can do a lot more damage in a 5000 lb vehicle doing eighty miles per hour than you could ever do on a bike.  The reductive reality given in the show seems designed to cater to mediocrity.

If we want to be really Malthusian about it, making sure everyone survives every accident no matter how many they cause might appeal to SUV drivers, but for the rest of us keeping them alive to do it again (and again) is a disaster.

Biking demands competence and punishes you harshly for not having it.  If you want mediocrity go drive a car, if you want incompetence go drive as big a vehicle as you can find.  You can hit as many things as you want and if you have enough money, you can burn a hole in the world while doing it in a massive SUV that pretty much guarantees your safety.
US stats: motorcyclists are 37x more likely to die in a crash 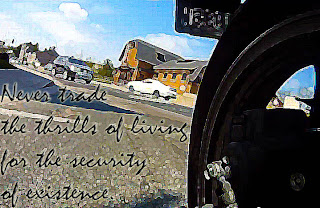 This is an exceptionally worthless statistic, of course you’re more likely to die in an accident if you’re on a bike.  If you were in a motor vehicle collision would you rather be on a motorcycle or in a Smartcar, a Hummer or a Sherman tank?  That tank would offer you the greatest level of protection if you were in an accident, but would be cripplingly wasteful.

Once again, there are other degrees of damage being done in the complex activity of human beings burning fossil fuels to transport themselves.  This past summer I did about four thousand kilometers on the bike.  I didn’t die, I didn’t come close to having an accident and I did it all at about 60mpg.  That’s a reality I’m not ignoring.
Why do people continue to take this risk? 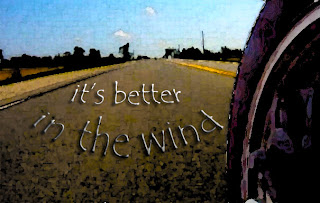 If reality is what we think it is I want mine to reward competence and punish incompetence.

I don’t believe that longevity is the point of human existence, I believe that we should all seek to improve ourselves by any means available, even and especially if that means putting ourselves at risk in order to do so.

I think we should strive to improve ourselves through the activities that we pursue and that should involve putting some aspect of yourself on the line in order to make the feedback meaningful.  Learning that matters can only be gained through sacrifice and risk.

I’m not ignoring reality when I get on a bike, I’m facing it in a way that most cage drivers never will.