Last week I was in Edmonton at the Skills Canada National Competition.  We were there for IT & Networking, but they have everything from metal work and carpentry to 3d modelling and fashion on hand.  One of the competitions I was drawn back to again and again was motive power where competitors were working on everything from outboard motors to a variety of motorbikes. 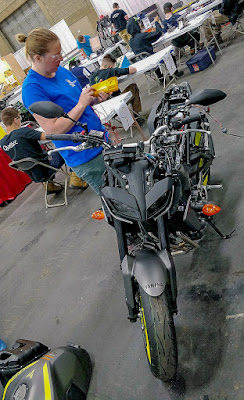 They had Kawasaki KX450s up on a block as well as some lovely Yamaha MT09s.  Both Yamaha and Kawasaki were sponsors at Skills Canada – which kinda makes you wonder where that Canadian manufacturer CanAm went, but then judging by the long faces of Team Quebec throughout the competition, perhaps they too find the idea of participating in a Canadian event to be bothersome.  How every other province and territory, many of them strongly represented by Canadians from all over the world as well as a strong contingent of aboriginal tradespeople, could be so positive about Skills Canada while Team Quebec looked like they were at the dentist the whole time was both baffling and frustrating.

Competitors in the motive power competition were diagnosing faults and doing maintenance under the watchful eyes of multiple judges.  This (of course) got me daydreaming of alternate ways of getting back to Ontario after the competition that didn’t involve air travel.  Though I can’t complain as I got bumped up to bulkhead behind first class and spent the entire flight back with Sherry Holmes.

We wrapped up Skills Canada on Wednesday, June 6th just after lunch in Edmonton.  From there it’s just over thirty-three hundred kilometres home. 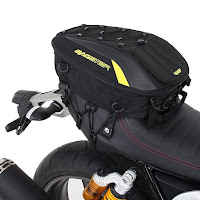 The MT09 isn’t exactly designed for long distance trips, but if I could manage doing three tanks of gas (the MT does about 190kms/to a tank) a day I’d be averaging close to 600kms daily.  That means a six day blitz across most of North America and around the Great Lakes to get home on eighteen tanks of fuel.

The only thing I’d need for the bike is a tail bag for essentials and then I’d be off.  It’s Canada in June, so the clothing options would have to be pretty dynamic as I’d be likely to see everything from 40°C heat to possible snow.  As it happens, Aerostich is just over half way back in Deluth, Minnesota, and they have a Roadcrafter suit that happens to match the MT09’s funky paint scheme pretty well.  It would only take a slight modification to the trip to pass through there.  If I’m looking for something that’ll get me through the madness that is Canadian weather, the Roadcrafter’s the thing.  The trick would be to get across The Prairies without freezing or overheating before enjoying the final fifteen hundred kilometres in and around The Great Lakes in a made to fit super-suit.  It’d make for a formidable before and after comparison. 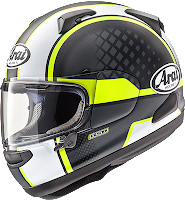 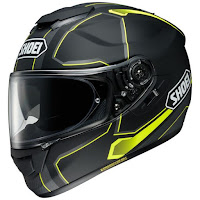 Edmonton was packed with motorcycle shops.  We saw everything from Indian/KTM to Ducati and the usual Hawg shops.  There is a lot of disposable income in Edmonton.  The MT09’s grey with high-vis paintwork is right on trend with a lot of Japanese helmets at the moment.  I’d have a fine choice of matching Shoei or Arai lids to choose from.

Funny how just seeing a bike after days spent on planes and buses gets me dreaming about riding again, even if it’s a six day slog over a quick three hour flight.  I suspect that most motorcyclists have this perverse nature about them.