After a ride over to the Forks of the Credit, and a quality coffee atHigher Ground, I rode the Forks for the first time on the Concours (which always feels lighter than it is in a Millennium Falcon kind of way), and then headed up to Orangeville.

The XT350 looked like the ideal bike.  Air cooled, super light weight, with a medium displacement, but this one was a poor example.  It looked like it had led a life that alternated between abuse and neglect.  Not only was it filthy, but it looked like it was going to rust through in some expensive places.  It didn’t start and after a dozen or so kicks, when it finally did fire up it sounded like a tractor.  It couldn’t have been more different to the only marginally more expensive, lower kilometer, six year newer, much loved, whisper quiet KLX.  I’ll trade a few cc’s for a bike that won’t strand me deep in the woods any day.I emailed the owner of the KLX standing on the street as the XT owner tried to get it started again and told him I’m all in.  It’s nice when the right thing falls into your lap just when you need it, and in my case that always seems to be a Kawasaki.  The KLX will be my third Kawi (though my first green one).  I can’t wait to get to know it. 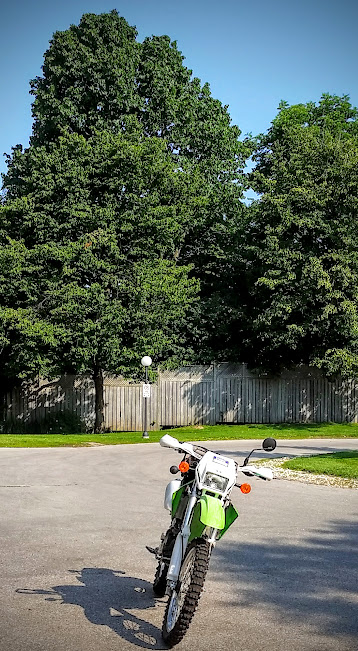