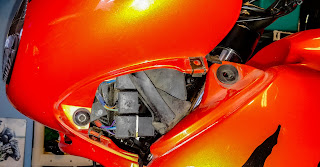 I’ve done a few LED light upgrades on motorcycles to date, so updating the indicators on my trusty 2003 Triumph Tiger 955i isn’t producing many surprises.  Unlike the Kawasaki Heavy Industries ZG1K project bike last time, the Triumph doesn’t use standard automotive blinker relays, so the cheap and cheerful option I went with last time from Amazon doesn’t have the same pinouts.  Fortunately, the blinker relay is easy to get to on the Tiger (pic right). 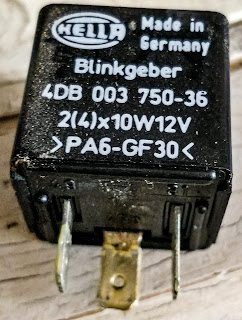 The stock, German made Hella blinkgeber 4db 003 750-36 indicator relay swaps the positive and negative terminals from the Japanese standard ones, so it isn’t a plug and play swap for a cheap, Chinese relay from Amazon.

Like most relays built for standard bulbs, it speeds up when it senses a lack of resistance (ie: a blown bulb) so you know when you’ve got a bulb out because it ticks fast.  LEDs are so much more efficient than standard bulbs that they act like a blown bulb, so you end up with hyper-flashing where your indicators are blinking silly fast.

While looking around for a plug and play alternative that wouldn’t have me making a rat’s nest out of a neat wiring loom, I came across superbrightLEDs.com and their primer on hyperflashing… 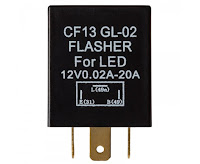 Looking through their site, I found an indicator relay that would be a straight swap on my Euro-awkward bike.  The price is pretty much the same as the Chinese part on Amazon, but then you get stung with shipping that is more than the cost of the part (Amazon shipping was covered).  They promise that this will work with LEDs, which I’m a bit cautious about because the other ones I’ve purchased have a potentiometer (dial control) on them that lets you adjust to the speed you want, and this one doesn’t.

It’s suggested in places that you can swap the power and ground, but a number of people seem to have had problems with that on various bikes, so I bit the bullet and ended up with a $24USD bill where it would have been $12CAD (shipping included) on Amazon.  I’m hoping I’m getting a higher quality piece for all that extra outlay (the superbrightLED one has a 2 year warranty on it whereas the Amazon one didn’t).  The part is on its way, so I should be able to finish the indicator upgrade in early January.


The rest of the wiring has been pretty straightforward.  The LED set I purchased from AliExpress (my first time using them – shipping wasn’t quick but everything got here eventually and the prices are amazing), worked fine when the system was doing 4 way flashers, but went into hyperblinking when I indicated.  It’s an easy wiring in, but again the Euro-awkward nature of the bike means it didn’t have standard sized spade clips and I had to cut the old ones off and use replacements which were way harder to find than they should have been.

As an aside, have you noticed that hardware stores don’t carry hardware any more?  A trip to my local hardware shops was more like going to home decorating shops with lots of pretty things but no actual hardware.  I ended up at an automotive specialty retailer to find electrical connectors.  Hardware stores are now just glorified department stores.  You can’t survive as a hardware retailer in a world where no one fixes anything.


Anyway, onwards and upwards.  After the Tiger, the Honda CBR900RR Fireblade project is getting the same treatment, so I’m going to have to figure out what indicator relay Honda went with.  Hopefully it isn’t as Euro-awkward as the Triumph.  I’ve always wondered why they don’t include an LED friendly relay in the LED lighting kits for motorcycles, but with everyone using different variations on the indicator relay, you’d be selling people parts that might not fit their situation. 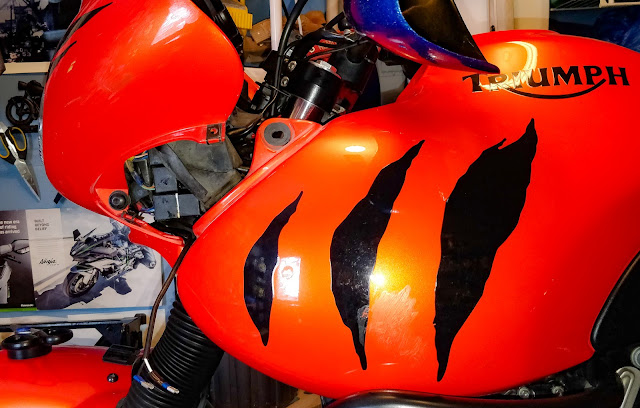