Just over three years ago I stumbled across the inaugural CyberTitan Student Cybersecurity Competition on ICTC’s webpage while looking up statistics for the information and communication technology job market.  I managed to convince four of my seniors to take a swing at it.  We got better and better round over round as we honed in on the expectations of the US CyberPatriot competition that CyberTitan works from.


In the competition students are given a virtual machine image (imagine a computer operating system like Windows operating inside a window).  These images are broken, with improper settings and things installed that shouldn’t be.  If you’ve ever had to try and clean a school laptop after a student has used it, you know what sort of messes can occur.


We were already pretty good at IT & Networking and CyberTitan offered us a way to exercise those skills while also discovering a newly emerging aspect of computing:  cybersecurity.  I found that our expansion into CyberTitan directly supported our Skills Ontario preparation – the two things are symbiotic.


We surprised ourselves by getting an email inviting us to the first Canadian National Finals in Fredericton, New Brunswick in May of 2018… 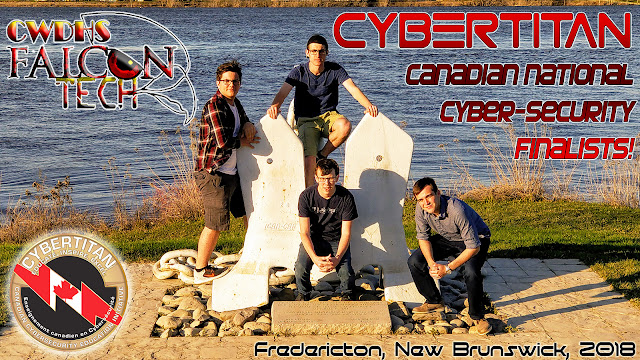 That success made some noise and the next year we had three teams of six students each.  While standing at the student photo for the 2018 finals, Sandra Saric, then VP of Innovation with ICTC, said under her breath, “where are all the girls?”  I took that and ran with it, encouraging my strongest grade 9 girls (I barely keep any of them into senior computer engineering classes) to form an all-female team for the 2018-19 season.


The girls did fabulously well, often chasing down our senior team on points.  Our junior team, the Cybears, also got us into the top tier of the competition for the first time before getting eliminated in the state finals.  The Terabytches offered me an inside look into systemic sexism in education as well as technology and made it clear why so many girls don’t pursue technology pathways in high school and beyond.


The Terabytches won the top female team in Canada wildcard spot for the 2018-19 National Finals in Ottawa and did a lot of press which I think (hope?) opened up the possibility of ICT and cybersecurity careers to more girls. 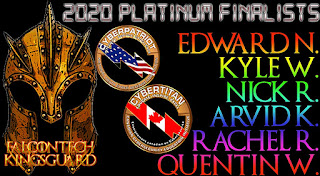 While 2019 was definitely the year of the Terabytches, it was also a good year consolidating our skills and building capacity.  For the first time in 2019/20 we had students returning who were no longer rookies in the competition (our first year team had all graduated).  For the 2020 season I encouraged the most experienced and engaged students to make a senior team with the intent of scoring higher in the competition than we’d ever done previously.  The team consisted of one of the Terabytches from the year before and the junior team who had gone platinum.  They re-branded themselves Kings Guard and tackled the 2020 competition with a focus that can only come from experience.


In previous years we were usually the best of the rest, getting beaten by specialist, urban schools from the big cities across Canada.  This year Kings Guard beat all but two of those teams for a third place finish in the semi-final round.  We went top-tier platinum and then proceeded to land in the top quarter of the best teams in the world.  We’d never breathed the air up here, and it tasted good!


The Terabytches experienced some turnover, but with three veterans and three  rookies, 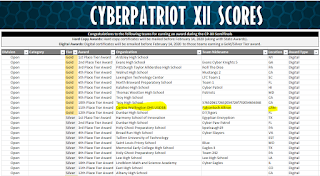 consistently beat their national champion scores from the year before.  Our two junior teams also scored well, with Altron in particular punching well above their weight.  Both junior teams made it to the gold tier semi-finals and produced strong results.  Altron finished top 12 in the world out of thousands of teams.  Seeing our little, rural school (it is literally surrounded by farm fields) on a list with some of the top cyber-schools in North America never gets old.


We’re waiting on CyberTitan to announce the Canadian finalists for this year’s competition as I write this, but regardless of the outcome this year’s students have produced outstanding results which point to a way forward for educators across Canada who want to engage their students with a subject that frankly freaks people out.


We aren’t magic.  What got us into this was an opportunity to explore an emerging field in technology and make our program more relevant.  If you’re curious and willing to give it a whirl, and can find students with the same curiosity, you can get involved with CyberTitan and begin to build capacity in this vital 21st Century fluency too. 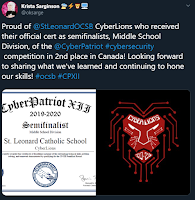 Krista Sarginson, who teaches at St Leonard in Manotick near Ottawa, took the plunge this year and had an epic rookie season, finishing second in Canada in the middle school division.  As more teachers get involved with CyberTitan, the network grows, as does the support.


Krista described the competition early on as techy and quite particular, but it didn’t take long for her to get a handle on the process and, as you can see from her team’s results, they very quickly got good at it!  What could happen next?  Hopefully her Cyberlions all head off to middle school (St Leonard is a k-6 school) and encourage them to participate next year.  Those vets are likely to clinch a national title!  Meanwhile, Krista is encouraging and engaging other teachers in her board.


What does your school get out of CyberTitan?  It teaches students and staff hands on about best cybersecurity practices and raises your digital literacy in meaningful ways.  Your board’s IT department will love your participation in it as it helps raise awareness around cybersecurity and promotes a healthier digital infrastructure.  The media glow around it is also very positive.  We’ve had a lot of attention from local and provincial media who are also very aware of the cybersecurity shortage we’re living in.  I won’t mention the swag students and coaches receive that includes t-shirts, all sorts of technical support, access to Cisco’s Netacademy, along with medals and awards.


You can find lots of statistics on how behind we are on cybersecurity, and education can play a big part in that.  The CyberTitan/Cyberpatriot competition offers students and teachers a well supported and engaging introduction to this exciting field of study, you should give it a go!

CyberTitan is only in its third year and has seen growth similar to our own, with over 200 teams from across Canada participating this year.  It’s my hope that by 2022 there are over 500 teams competing and the national finals is expanded to include three middle school teams who will duke it out for their own national title.


If we’re going to depend on ICT infrastructure to run our critical infrastructure (and we increasingly are), then we owe it to ourselves to take securing that infrastructure seriously.  ICTC’s CyberTitan helps raise cyber-fluency in our education system which will in turn make for a safer, more secure Canada.


This is the US CyberPatriot competition that CyberTitan works with:
www.uscyberpatriot.org/Pages/About/What-is-CyberPatriot.aspx


Here’s the presentation I’ve been doing around Ontario education for the past two years:
prezi.com/h4kf8yfkdtyr/?utm_campaign=share&utm_medium=copy