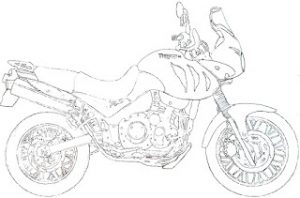 What I’ve got here is a photo of my Triumph Tiger 955i taken as near to fully side on as I could manage it.  I then photoshoped into a outline (trace contour and some negative inversion along with some line cleanup did it).  I saved that image as a vector and shared it with my trusty technology design teacher at work.  She cleaned up the lines a bit (mainly simplifying them) so they could be cut into perspex using a computer controlled router.
I then got an Arduino micro-controller and cut a length of Adafruit neo-pixel leds to fit the length of the perspex.  I soldered some wires onto the neo-pixel led strip and wired them up to the Arduino.  I then installed the libraries to run the neo-pixel strip and ran the basic test pattern code on the Arduino.
This is the result:
youtu.be/NAQBZQhmcgI

With a bit of coding you could colour code the display to something specific or make different patterns.  The strip along the bottom is 9 leds long, so you could get pretty fancy with patterns if that floated your boat.  I’ve also seen Arduinos run like graphic equalizers, responding to music with different colours and patterns, so that’s another option.

Metres long LED strips can be gotten cheap.  An Arduino can be had for less than $10 if you’re cagey about it.  Three wires and a bit of perspex and you’re ready to go.  I’d guess in raw parts it cost all of about ten bucks to put together, and that includes an Arduino that could do a lot of other things.  If you’ve got a customized bike, a clean photo and a bit of prep and you’d have a disco light version of your specific machine.

I 3d modelled the Tiger a while ago using a Structure Sensor.  It snaps on to an ipad and is very straightforward to use.  Once you’ve ‘painted’ in your 3d model using the lasers on the sensor you can clean it up in something like the 3d modelling software that is included in Windows 10.  Here is what an upload of that looks like on Sketchfab: 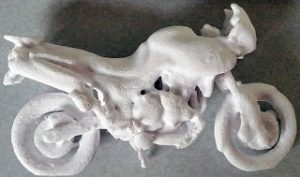 I used Meshmixer to clean up any missed pieces in the original scan and then dropped it into a Dremel 3d printer.  This printer is fairly cheap and low resolution, but the model came out ok.  What I’d really like to do is try and print it in something like the FormLabs Form2.  Their terminator style resin based laser prints are way higher resolution, so you don’t get the blockiness that you see in the additive 3d print process.
You can see how blocky the print is on the clean / top side of the print (the Dremel printer makes up the plastic model like a wedding cake getting layered).  The bottom side with all the extra support pieces that I had to cut off after is much rougher.  Another benefit of the Formlabs printer would be no annoying structural supports to cut off.
Like the disco light above, what’s nice about this is that it’s a direct copy of my specific bike.  If you’ve got a custom ride, scanning it with the Structure Sensor and then printing it out on something nice like the Formlabs printer would mean a smooth, accurate scale model of your particular machine. What would be even cooler would be getting my hands on a large format 3d printer, then I’d be making accurate 3d models of fairing pieces and going to town on them in 3d design software.  I still want to remake a sports bike with  textured dragon scale fairings!