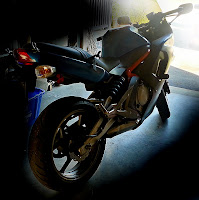 This has been many weeks in the making.  I began de-blacking the ’07 Kawasaki Ninja 650r (my first bike) in May.  Last weekend I took another big run at it.  This weekend I finally got it to the point where I can live with it.  I think I’ll do the rest once the riding season is over in Canada, but in the meantime, I’ve got a Ninja that looks a lot better than it did. 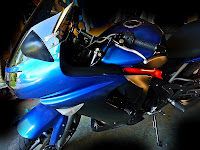 I’ve blued the front end and the fairings down to the air intake.  I’ll eventually do the entire bike, but those fairing are big and it takes a long time to strip the flat black off them (I’m using graffiti remover in small areas at a time).

At the moment the tank, front end and rear end are completely covered, but the fairings are only half blue.  I’ve faded the metallic blue into the existing flat black and it doesn’t look half bad. 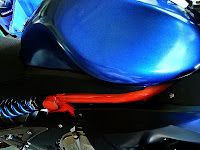 The more interesting bit is the frame.  I wanted a burnt orange, but every orange on the shelf was a pylon orange.  I was all set to mix a yellow and dark red to a burnt orange, but the mixing didn’t go well, it ended up looking an angry pink.  It eventually settled into a darker orange, but I still wasn’t happy with it, it looked muddy.. 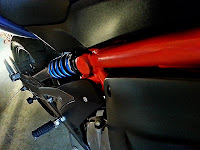 I had greater success getting the orange I wanted by doing a base coat of pylon orange spray with a cover of candy apple red metallic.  The result is the sparkling burnt orange I was looking for.  The plastic drop sheets and cardboard I was using to shield the rest of the bike looked like they’d come out of a volcano when I was done.  I’m not entirely thrilled with the finish, but now that I have some sense of how to mix the colours (orange based, mix in light layers of red while the orange is still wet), I’m ready to experiment more. 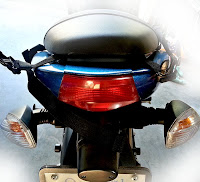 I got a different gloss this time, thinking they are all pretty much the same,
they aren’t. 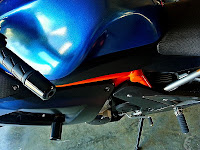 The ultra-cover 2x (the blue and white can), gives you what looks like a factory clear coat finish.  The lacquer makes a foggy mess.  I’ll only use the Ultra Cover in
future applications. 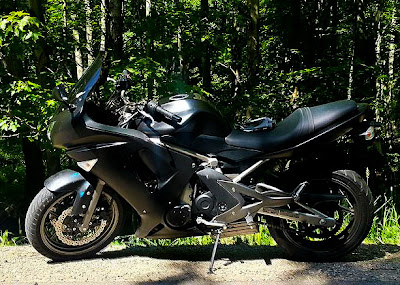 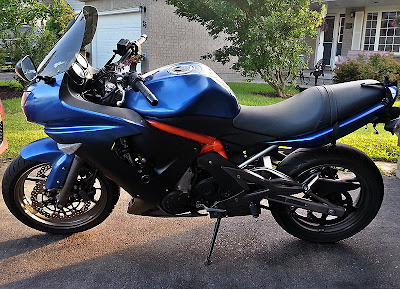 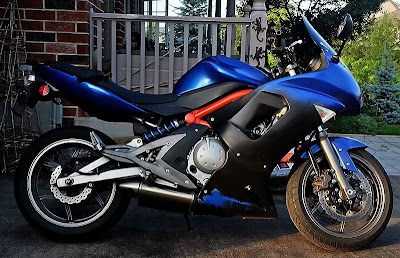 One heck of a lot more visible, and it sparkles in the sun.

When I get the fairings finally done I’ll giver her a real photo shoot. 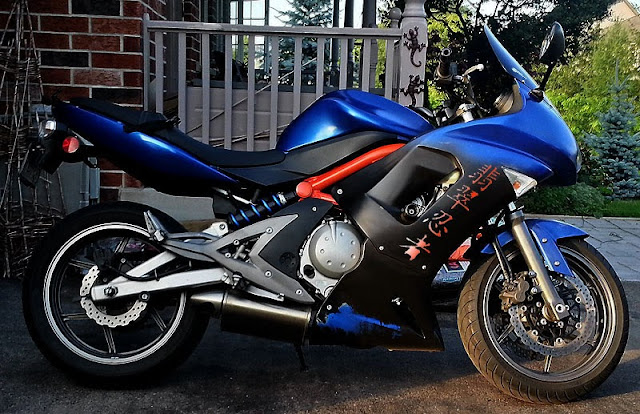