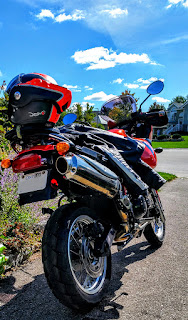 A rough week at work discovering just how untrustworthy people can be had gotten me down.  On top of that (or perhaps because of it), I was fighting an imminent cold.  If you’re reading this then you probably already know it’s better in the wind, so I went looking for some.

I was originally thinking of pushing up to Beaver Valley, but it’s a long slog across tedious Southwestern Ontario to get to any good bits, I wanted to get to twisty roads sooner.  The most direct route to the Niagara escarpment, one of the few places not tediously flat around here, is through Orangeville.

I fired the Tiger up and aimed it north east.  The air was cool, in the high teens Celsius, and the traffic light.  I dispatched appliance coloured (and shaped) minivans as I came upon them and quickly made my way over to The Escarpment.

Bypassing Orangeville, I rode past what must have been a forty pound beaver lying in the middle of the road.  This thing was big enough to knock someone off a bike or damage the underside of a car, but the Orangeville police officer fifty yards up the road running a a radar trap was more interested in revenue streams than road safety.  Stay classy Orangeville popo.


Hockley Road seldom has you up on the crown of your tire.  I was alone going east but was passed by several groups of bikes coming the other way from the GTA.  After the never ending flatness it was nice to drop down into the valley and lean.  Leaning on a motorbike is as close as you’ll ever come to flying.  It feels more like flying than flying does.

When I’m riding all of the negative things my mind impulsively chews away on are washed away in the wind.  It’s partly to do with the complexity of piloting a motorcycle.  You’re deeply involved in the progress of the machine; hands, feet and whole body balance, so your mind is focused away from those nagging thoughts.  It’s also partly to do with the sensory flow you experience.  The wind, the smell, the temperature, the sound and sights are powerful as they accelerate around you.  You are busy, involved, and the world demands to be experienced when you ride a motorbike.


After sixty plus kilometres of twisty roads I was ready for a break.  My hands were actually getting cold since I’d been spending my time weaving through shady, leafy green valleys.  Coming back down River Road, I stopped at the Terra Nova Public House for lunch.  It isn’t cheap, but the food is locally sourced and well prepared.  Sitting in the sun on the patio watching the bikes go by is a nice way to spend an hour on a sunny Sunday afternoon. 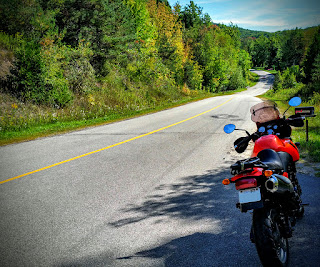 With some hot food inside me, I was ready to leave these lovely roads and begin the long ride back into the agricultural desert in which I live.  I took my time heading toward Horning’s Mills (where I once thought of buying a house), getting the corners right that I hadn’t on the way in.  There is one particularly twisty section that has a decreasing radius corner that catches you out if you come in too hot.  On the way in I’d overcooked it and had to brake, on the way out it was a smooth, throttle only proposition.

There are a couple of more big sweepers passing north over Shelbourne on 17 through the wind mill fields, but after that things get pretty straight.  By this point I was loose and feelin’ good.  On the straights I found curves in the form of mobile chicanes, and passed them.  It felt like I was in a time machine, I was home almost before I l 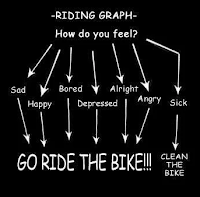 eft.  Motorcycles can make even straight roads exciting if you approach them with gusto.

Once back the cold closed in and the nagging doubts returned.  If I could ride a bike forever, I’d always get to sit in that meditative saddle.  When I watch around the world trips on the TV I think the best part would be getting to be out in the wind every day, always seeing something different, having the world wash over you.  No wonder Ted Simon and others come back from their trips hearing the sound of one hand clapping.

Some spontaneous art from the ride… 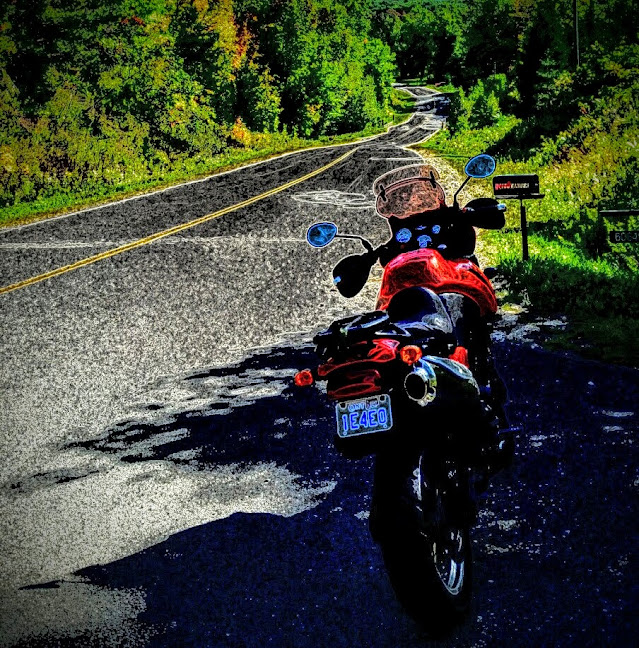 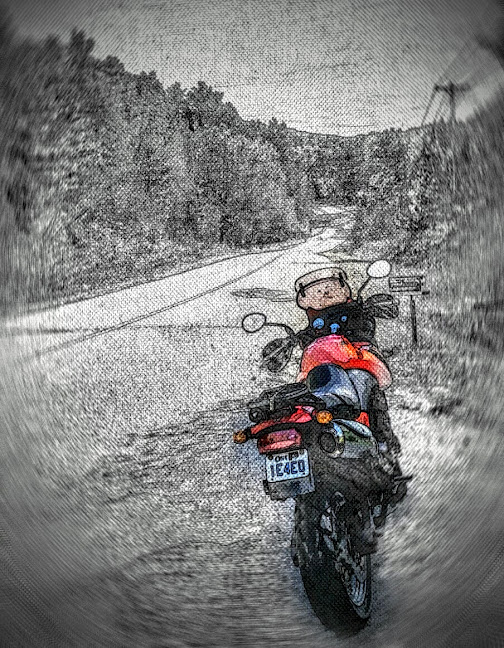 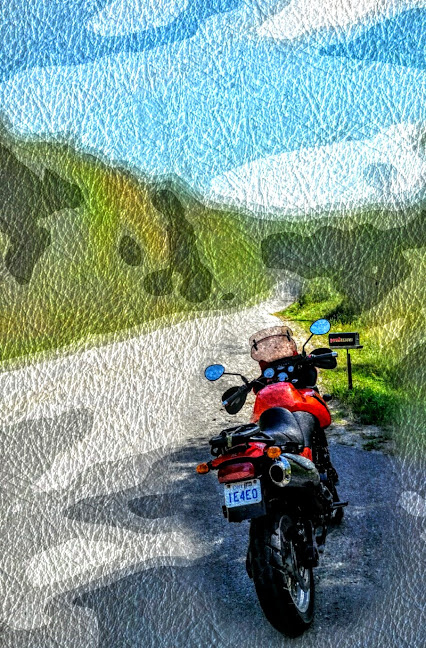 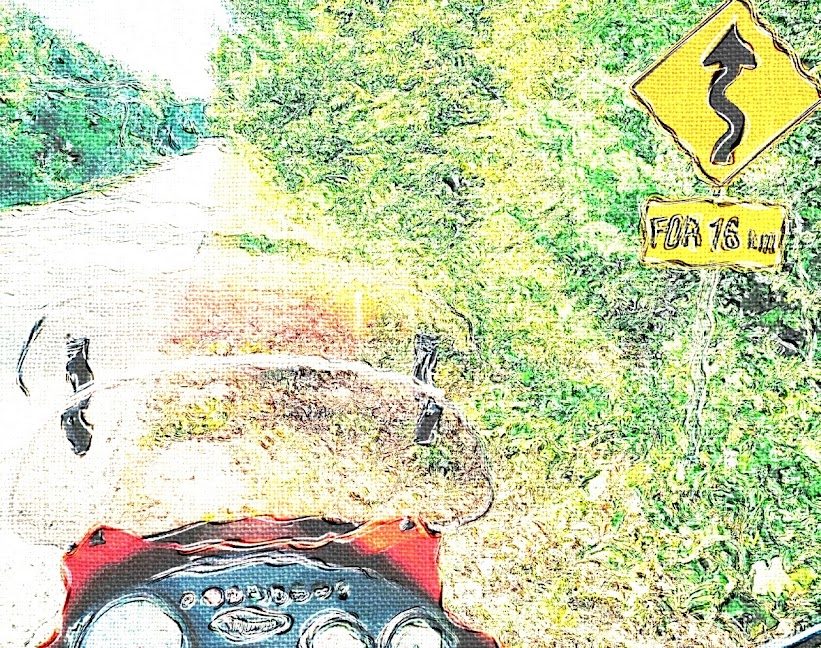 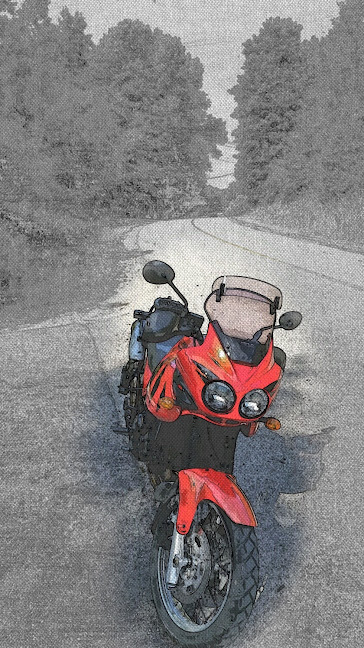 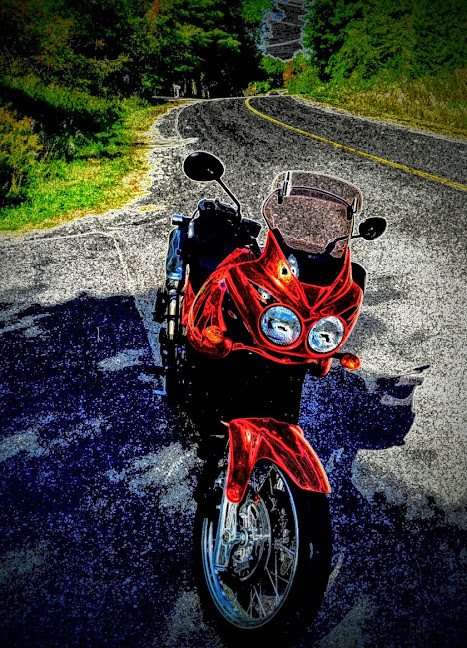