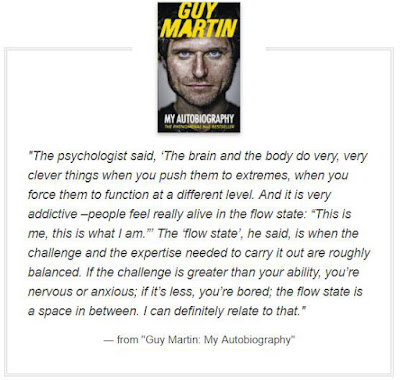 I just finished Guy Martin’s autobiography.  Towards the end of the book he talks about taking a non-rider around a road racing track in Ireland.  The show had a psychologist on hand who talked about the seeming insanity of motorcycle road racing.  Rather than just seeing it as adrenaline junkie speed thrills, the psychologist talks about the state of flow and how an athlete in it isn’t in a risk mind-set.  The state of flow is an expanded awareness that most people have insufficient training and skill to be familiar with.  The extreme athlete isn’t riding a wave of thrill, they wouldn’t be able to perform if they did.

Stressed but prepared athletes enter a state of flow where they are so engaged with what they are doing that they disappear into their actions.  This isn’t an act of imagination where they are thinking about what they look like from the outside, it’s self awareness through the act itself.  This is a truer mirror of the self than any imaginative act.

Many people consider self awareness to be this moment of recognition where you’re constructing how you think you fit into the world around you, but this is ultimately fictional and prone to psychological abstraction.  A doubting person won’t see themselves as they are any more than an arrogant person would.  It might provide you with a vague sense of your place in the world, but it isn’t trustworthy.

Awareness in the state of flow has much more in common with the long tradition of Zen and other Eastern philosophies where the practitioner’s sense of self is lost in the act.  But being lost in that act allows you to live in the moment more completely.  Instead of thinking about what might happen next or self-criticizing while performing, someone in the state of flow isn’t conscious in the typical manner.  The wasted energy spent on consciously being self aware is instead spent in the activity itself; the activity becomes who you are.

When a talking head asks an athlete what they were thinking about when they were performing, the athlete always seems confused by the question.  When they ask if the audience was a factor in their performance they are baffled.  If you’re rolling ideas around in your head while you’re trying to perform you know you’re not at peak performance, you’re not the moment itself. 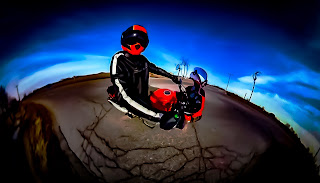 One of the reasons I enjoy riding motorcycles is because I’ve been doing it long enough that I can get into the process and become a part of the ride.  Zen monks use physical tasks like sweeping the floor to put themselves into the present.  I find riding a motorcycle does the same thing for me.  The complexity of using all of my limbs and my whole body to operate the machine allows me to let go of my conscious self and become something more. 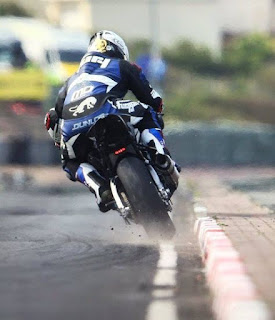 In a more extreme case like Guy Martin’s, he is able to get into a flow state while doing almost two hundred miles an hour on a motorbike on a public road.  This can seem like breath taking daredevilry, but it isn’t, it’s a master in the state of flow.  The mind is clear, you’re aware of more than you ever can be when you’re looking through the pinched viewpoint of your conscious mind.


That expansive state of awareness is what happens when you’re in flow, and it feels wonderful.  You can see out of the back of your head and your body seems capable of reflexes that would confound you if you tried them consciously.  If you’ve ever experienced that moment of bliss,  you know it’s worth finding again.