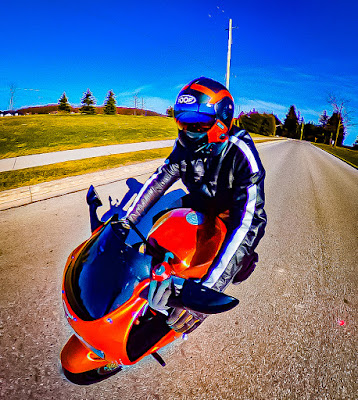 The first couple of times I rode the Honda I found the riding position hanging over the gas tank somewhat extreme.  The bike was astonishingly light compared to others I’ve ridden (dirt bikes excepted), and changes directions like it’s telepathic, though the clip on handlebars mean you don’t get a lot of leverage when turning.

While the riding position is pretty extreme compared to the adventure and sports touring bikes I’ve ridden recently, it’s the bike’s geometry that really surprises.  The rake on the front wheel is nearly vertical, and feels like it’s right under your hands rather than stretched out in front of you.  This results in those telepathic direction changes.

I’ve actually jumped on the Fireblade and had my groin seize and had to stop to stretch.  I’ve taken to doing some limbering up, Zombieland style, before I get moving on the Honda.  It’s nothing that a bit of yoga doesn’t address in my 50 year old self, but the ‘Blade is an extreme thing that demands physical interaction; it reminds you that it’s a SPORTS bike. 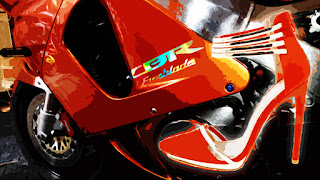 So, why be uncomfortable?  It might be argued that the CBR900RR is an appearance bike; something you put on to get attention, but that isn’t why it’s the way it is.  The ‘Blade is built to explore the physical limits of what a motorcycle can do – it’s the opposite of a cruiser, it’s about the sport of motorcycling, not the appearance.  Every choice on the bike, including the riding position, is designed to maximize speed and agility.  The ‘Blade is more of a boxing boot than a high heel.

One of the most shocking things about riding the Fireblade is its acceleration.  I’ve yet to own a bike where I can’t turn the throttle to the stop opening it up… until the ‘Blade.  It’s so light it pulls strong through the first sixty-five hundred RPMs, but then it lunges to the redline in a startling manner.  Even in higher gears I haven’t turned the throttle to the stop yet.

The CBR900RR is described as a bike that is engineered to exceed your abilities but is accessible enough to show you how to improve them, and that’s just how it feels.  As someone who has gone out of his way to explore motorcycling, it checks a box for yet another aspect of the sport to discover.  I won’t be putting big miles on the CBR, but they’ll be highly intentional and informative ones.