I’m a visual animal to begin with, and Pinterest feeds my first language directly without any words; I’m usually a fan.  As my collection of pins grow the feed starts to show things that the Pinterest A.I. thinks I’ll be interested in.  That impartial comparison revealed a number of interesting and not particularly flattering connections to motorcycles. 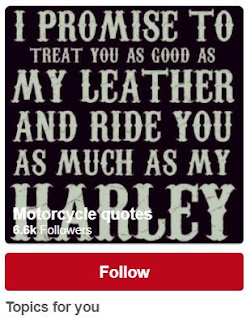 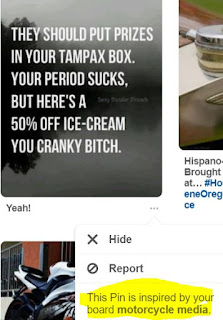 Apparently a large number of people who make motorcycle themed boards on Pinterest don’t think too much of women.  They either enjoy taking shots at their biological functions or treating them like sex toys.  This gets tiresome quickly when you post nothing like this on your boards. 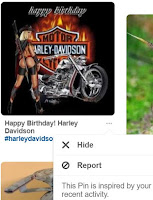 How overt sexism possibly has anything to do with motorcycles is beyond me, other than the fact that a lot of people who profess to love motorbikes also evidently have strongly held beliefs about the inferiority of women and like to post disparaging images to support and publicize that belief.


The A.I. isn’t judging, it’s just matching up evident associations between what I would have described as diverse, unrelated interests.  But there is a calculable statistical connection between people who post pictures about motorcycles and people who like to advertise the fact that they are a sexist asshole.  If there wasn’t the maths wouldn’t have put that crap in my feed.  I find it all a bit embarrassing.


When you tell Pinterest you’re not a fan of these suggestions it begins to tune them out.  It’s taken the better part of a week of continual weeding to clean out my feed, which makes me sad.  The clingyness of this statistical connection suggests it’s a strong one, which leads to the question: are the majority of motorcycle riders sexist?  If they are then I guess Pinterest’s AI should keep doing what it’s doing, but I hope my actions are making that AI a bit better at connecting interests.


Not everyone who is into bikes is a mouth breathing jerk. 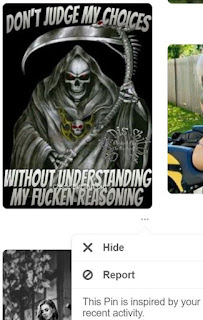 When the AI isn’t battering you with overt sexism, it’s hammering you with what appears to be insecure man syndrome. Apparently the women hating angry men are also very insecure and like to post images and words that I can best describe as mad-bragging.  I’ve never gotten the chest beating “I’m a tough guy” talk.  Anyone who spends a lot of time telling you how tough they are probably isn’t. 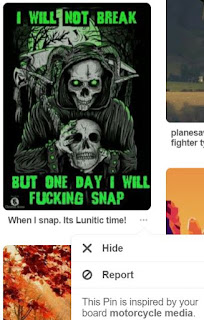 Evidently there is mathematical evidence that many people who like motorcycles also have a tendency to hate women and nurse giant insecurity complexes; or perhaps they are just the loudest ones.

What got me wondering about this was a sudden increase in the bimbo on a cruiser/angry man images in my feed.  What really pushed me over the top was an overt reference to Trumpist conservatism that verged on white supremacist.  I was so shocked by the pin that I removed it immediately.  I’d be embarrassed to be associated with an image like that.  Afterwards I was noticing a proliferation of other biker nonsense and started screen grabbing it as it happened.  I wish I’d kept the first one as it makes the later ones look tame by comparison.  It makes me wonder just how poisonous and nasty some people’s feeds could become.  You could make the argument that it’s what they want to see, but if were Pinterest I wouldn’t feel good about spreading that kind of negativity.

If you look at my Motorcycle Media page, you won’t find any bikinis or angry biker threats, yet Pinterest clearly sees a statistical connection between those subjects and what I’m into.  Any women in my pages are conspicuous in that they are riders, not adornments, and are clothed as such.

From a technical perspective I wonder if Pinterest are looking just at keywords or whether they have something smarter going on with image recognition.  Considering it’s Pinterest I’d hope it’s the later, yet they seem intent on trying to hook me up to the angry-white-guy-biker vibe, which I’ve never shown any interest in.  Perhaps these are teething pains as Pinterest seems to be exploring AI quite aggressively.

I’ve bumped into North American biker culture before, and it usually hasn’t been all that much fun.  It seems particularly comfortable with a view of masculinity that seems pretty antiquated.  These archaic misogynists appear determined to cling to their 20th (19th?) Century ideas.  This doesn’t bother me that much because they’re on the wrong side of history, I just wish Pinterest wasn’t so intent on slapping me in the face with them.