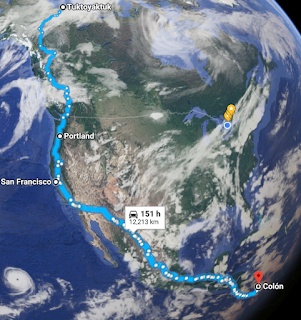 It’s that time of year again.  Dreams of escape surround me.  If I left right now I could get in and out of Tuktoyaktuk on Canada’s north shore before the snows arrive (just).  I might have to bomb up there in a van just to get out in time, but then it’d be heading south across the Americas for months, chasing the summer.


The west coast as autumn falls would be glorious.  As the snows start to fly in Canada, I’d be into Mexico and Central America.  An unrushed few weeks working my down through the many border crossings would be much less stressful if I didn’t have to be somewhere somewhen.  Crossing the Darien Gap from Panama to Columbia is five days on a boat and a chance to take a break from the saddle. 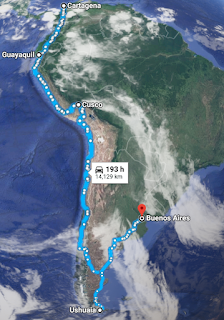 The boat lands in Columbia.  Once in South America I’d find somewhere to bed down over the holidays in Colombia or Ecuador before rolling south into the South American summer.  Spending Christmas on an empty Andean shoreline facing the never ending Pacific would be glorious.


I’d push south and see Machu Picchu after the holidays and then try and catch at least one stage of the Dakar Rally as it thunders around Peru in January.  A Peruvian desert stage would be awesome.

As summer wore on in the southern hemisphere, I’d continue south to Ushuaia on the southern end of Argentina.  After going from arctic to antarctic, I’d work my way back up to Buenos Aires and start the process of packing up the bike for a trans-Atlantic crossing to Cape Town.

adventuremotorcycletravel.com/listing/darien-gap/
wildcardsailing.com/motorcycle-shipping-to-colombia/
tkmotorcyclediaries.blogspot.com/2017/04/todd-blubaughs-too-far-gone.html
…for what it feels like to peer over the edge into a never ending ride.