I was all proud of myself for pushing into late November on two wheels this year.  When they finally laid down salt and sand after the first real snowfall I put the Concours away and stripped it down for winter maintenance.  I like having a twenty year old motorbike, but it isn’t a hop on and go kind of machine, it needs TLC.

A bigger mistake was putting away the KLX even before that.  A newer machine with no need for heavy maintenance, it would have made sense to keep it handy just in case.  The past week I could have ridden in to work several times, but I’m finding myself bike-blocked by too early hibernation habits and a single purpose motorbike.

I wouldn’t be going on any long rides, just commuting, but that means 2-up with my son to drop him off at school.  I got the Concours because it does this job well while still letting me fly when I want to.  The KLX just manages the job of carrying me (it struggles to run at speed on the road with my 250lbs), but with storage and a second passenger?  I think it would be fairly miserable.  Perhaps that’s what’s stopping me from hauling it out of the shed again.

The Concours isn’t going anywhere, but the KLX, while a good introduction to off road riding isn’t the Swiss Army knife of a bike I was looking for.  Come spring I’m going to liquidate some biking assets and go looking for a more multi-functional alternative.

I think I’ll clear $1000 on the XS1100 I’m currently fixing up, and I think I’ll be able to get what I bought the KLX for ($2000).  Getting the $600 back I spent on the little Yamaha should also be possible.  With $3600 on hand I have some interesting choices when it comes to a Swiss-Army knife bike I can keep handy for multi-surface riding while also being able to ride 2 up while commuting.  The 650cc dual sport class of bikes has three contenders worth considering…

I’m thinking once again about a Kawasaki KLR650.  A tank of a bike.  Not fast, but fast enough, able to carry two up, and rugged.  If looked after it’d hammer along for a long time.  The KLR is the darling of the cheap adventure rider and has an awful lot of after market accessory clobber as a result.


Honda makes an equivalent bike, the XR650.  It looks more off road focused, and it’d be my first Honda.  Other XR650s hover around $3000 with low kilometres.  They seem a bit more expensive than either the KLR or the Suzuki, but Hondas are famous for holding value like that.

I looked at a DR600 last year, but shied away from such an old bike (this was an ’89 in poor condition).  The DR600 evolved into the DR650 which is still in production today.

All three of these 650cc dualsports have enjoyed strangely long production runs with minimal changes.  That gives them a deep and well supported parts availability though.

I could creep into the adventure bike genre proper for about twice what I’ve got.  At under ten grand I’d consider the current crop of mid-sized adventure touring bikes, especially the ones with some off-road capability.  The Honda NC750x rolls out for just under $10k.  Suzuki’s V-Strom 650 is five hundred bucks cheaper, and the Kawasaki Versys 650 is a grand under that, though it isn’t much of an off-road machine.  The Honda CB500x rolls out for seven grand, making it an even cheaper option.  These bikes tend to put on the airs of an adventure bike without delivering any real off-road abilities.  Being new they’d all handle the job of an always-on/Swiss army knife bike better than the venerable Connie though.

At just over ten grand I’m into Triumph Scrambler territory.  This would scratch both the classic itch as well as the multi-surface riding itch.  I’m not interested in MX riding.  My off roading would be dirt roads and light trail riding.  Staying away from the brightly coloured, long shocked dirt bikes would be OK with me, especially if I were on a classic looking Scrambler.


The Scrambler genre has picked up as of late, with Ducati and BMW both entering the fray.  Yamaha is also doing it (though overseas), and Scramblers have long been a favourite of the custom crowd.  But unless I can make more space, a home made custom isn’t the dependable always on machine I’m looking for… though that hasn’t stopped me before.

Rather than just jumping into another dual sport that puts function before everything, maybe I should just start working toward the Scrambler I’d rather have. 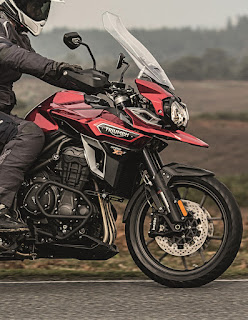 However, the adventure bike rabbit hole goes all the way to the 1%er land.  On the way to Silly-Rich World you’ve got some multi-faceted mid-level adventure machines that are both stylish and capable.

With much disposable income I could go with the new Triumph Tiger 800cc XCx (about $16k).  With more cash on hand I’d be onto the new Triumph Tiger Explorer (north of $20k) or perhaps Honda’s newly re-released Africa Twin (maybe $17k?).  In this territory you can get a stylish, long-distance able, off road capable machine.

Once you get into the high end adventure market things get silly quickly.  Suddenly you’re thinking about Ducati Multistradas and superbike fast KTM Super Adventures.  Bikes with more computers than a moonshot.  Every time I read an article about these bikes they are described as fantastic, followed by a long list of all the things that broke on them but were covered under warranty.  I guess that’s an adventure of a sort.

These kinds of bikes wander into more than just disposable income.  If I’m buying a bike like that I’d better be at my leisure.  Dropping upwards of $30k on a motorcycle that can handle dirt roads (but needs expensive TLC every time you do) should mean you’ve also got a stable of a dozen other bikes and lots of time to ride them.

Back in the real world I’m motivated to expand my riding season and have a machine on hand that can do more than one thing if the Connie is feeling her age.  Come spring I’ll be considering options to scramble or dual sport, but it’ll be scrambling unless I can afford an actual adventure bike.  If I’m going to look for a multi-purpose always on bike, I’d also like to get one that tickles an aesthetic itch.