I’ve written a couple of pandemic teaching reflections recently that I’m not going to publish because staring into that abyss isn’t doing me any good.  What I have put out acknowledges the difficult situation we find ourselves in, how poorly it has been managed and what we can do to fix it, but I don’t know that fixing or improving education is on anyone’s radar in the Ontario government at the moment.

At best, our current government’s interests seem to be driven entirely by making education as cheap as it can be.  At worst I fear the intent is to drive public education into such a state of disrepair that private charter schools will suddenly appear as a solution to this managed failure, but privatization produces a whole new set of problems and charter schools often result in poorer performance at greater cost.  I always thought Ontarians deserved better, but perhaps we don’t. 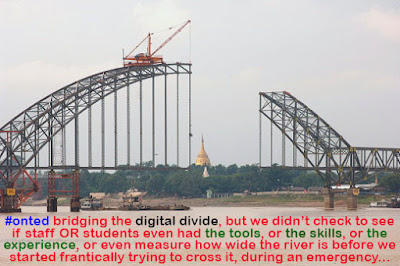 Meanwhile, we stagger to the end of this absolutely terrible school year that began with the former minister of education telling us our children will learn resiliency by being abused in large classes and ended most recently with the current minister demanding the use of banned software that breaks a number of Canadian privacy laws.  In between this government has belittled and attacked my profession at every turn, and yet they still managed to lose the battle for public support, though that didn’t stop them from forcing a contract on us that degrades system performance in every way during an unprecedented health emergency.

With no end in sight frustrated teachers are rightly complaining about a lack of engagement in this remote learning situation where expectations change week to week, digital divide issues remain largely unaddressed and there are no consequences for a lack of participation.  But we shouldn’t be surprised, ineffective pass rates are the rule in remote elearning – making marks meaningless is the only way the system can push an entire generation of students through the system.


Ask any teacher who has done remote elearning and they’ll tell you that a two-thirds credit achievement rate is about as good as it gets – and that’s in a group of students who volunteered for remote learning and all have the ability to access it.  Attrition is more common in elearning than learning is, they should call it eAttrition.  This is the kind of false economy the repeated demands for mandatory elearning will give us – it’ll look cheap on the surface but high drop out rates will make it more expensive in the long run.  The fact that any Ontario students are still engaged at all in remote learning is a testament to the thousands of teachers doing back-flips to try and reach them by any means available in a system that seems intent on doing it poorly. 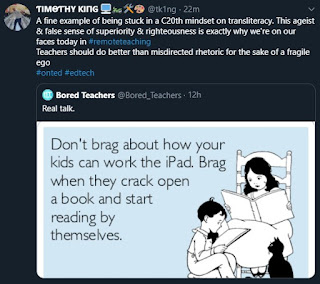 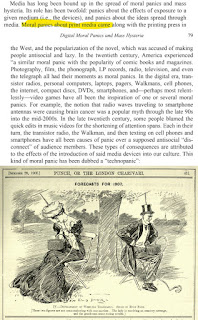 While all that’s going on, proudly trans-illiterate teachers are still sniping at the situation and blaming everything on the fact that the medium they grew up with isn’t the medium literacy is delivered in half a century later.  If you can’t navigate the medium, you can’t fully comprehend the message – this is one of the basic foundations of media literacy, yet there are is a majority of righteous teachers intent on protecting this dated idea of what literacy is.  Instead of putting their outmoded concepts of literacy on a pedestal, perhaps it’s time to learn something new and accept that the society you grew up in fifty years ago has moved on significantly.


We’ve always had a hate on for changes in medium, life long learning is just such hard work.  Instead of moving with the times, these Luddites will cling to their habits to the end.  That they’re usually senior teachers in leadership positions with the most secure jobs and highest pay says a great deal about how well our system is able to adapt and stay relevant in a constantly evolving media-scape.


As we stagger to the end of this absurd year I’m just trying to keep my head above water.  I had a momentary sense of traction the other week when we were finally allowed into our school so we could put together some computers that we had sitting in there and get them out to teachers who desperately needed them – over 8 weeks into this remote learning crisis.  Getting out and doing something felt good, maybe too good.  It reminded me of the multi-dimensional approach to teaching I’d always adopted, doing work both in and beyond the classroom, school and even my board to help improve our practice in as many ways as I can.  After getting a taste of it for a day it was difficult to go back to the do less with less mandate of remote learning. 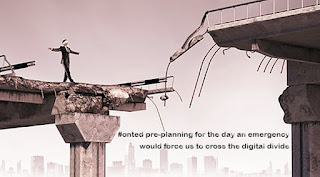 Instead of engaging in this simple and inexpensive solution to minimizing the digital divide on a system wide scale, I’m back at home repeatedly hearing about a digital divide that no one in management seems to want to acknowledge.  Only about one third of our staff responded to our short survey of who needed tech at home.  Even though we resolved the digital divide for those staff members, two thirds of them in our building may very well be trying to remote teach without the right tools.  In other schools across our board and across the province we could be addressing the digital divide in terms of a lack of technology access for staff.  Suddenly finding myself back to doing less isn’t how I approach my profession and is a source of constant frustration that I have to let go of less it drive me mad! 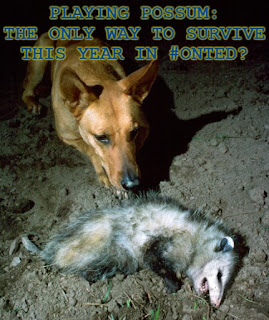 Which is where I’m at on this lovely Saturday morning.  Not caring eases the anxiety and frustration, but it also means the clowns running this circus get to sell it off to their cousins who happen to be starting up charter schools.  In the process we will have sold Ontario’s children to these greedy bastards and made things worse for everyone.


Even though I’m exhausted and feeling defeated by this today, I’ll be back when I’ve had a couple of days away, because I have an important job that it’s important to do well.  I may be playing dead right now (and I’m not even doing that particularly well), but I’m just waiting for an opportunity to move when we have a chance of winning Ontario education back from the hands of this circus that a minority of mis-guided people elected.