There was a time when every motorcyclist was also an amateur mechanic.  Getting your hands dirty was the only way to keep early motorcycles running.  We’re over a century into the evolution of the motorized bike now and, as in all places, digitization has taken over.  Modern mechanics are now called technicians and have to be as adept at communicating with the computers on a modern motorcycle as the old school types were at diagnosing a mechanical fault with their senses.  Both are complicated, but in quite different ways.  There are obvious advantages to modern bikes in terms of efficiency, ease of use and dependability, but motorcycling is inherently a compromise in convenience, and many of the iconoclasts who escape the clutches of automotive transport to ride in the wind question the replacement of human skill with automated assistance.

Back in the day the motorcyclist themselves performed many of the tasks that a modern day technician does, so what was left to the old school mechanic?  What you’d typically find in a pre-war motorcycle repair shop looked more akin to a machinist’s bench than the antiseptic, electronically focused diagnostics bay of a modern day garage.  That ability to manufacturer your own parts and diagnose problems without computer support, using only your senses and your hands might seem simplistic and archaic, but it was nothing of the sort.  There is a secret art to working with pre-electronic, analogue motorcycles that trips up many modern technicians who, while adept in leveraging digital tools to diagnose digital machines and replace parts, struggle to diagnose and repair mechanical faults.

If you’re into restoring older machinery, this vanishing skill set is hard to come by, but I’m fortunate to live near one of these rare, independent, locally owned shops.  Lloyd Gadd is the owner and operator of Mostly Ironheads in Elora, Ontario.  With decades of experience in mechanics, he approaches motorcycle repair old school.  His shop is part machinists, part mechanics and part historical ode to The Motor Company.  Lloyd focuses on older Harley Davidsons, but as the name of the shop implies, it’s not an exclusive focus.  Lloyd is also a qualified mechanic who can do everything from MoT safeties to changing a tire.

I was in there most recently getting last winter’s Fireblade project safetied, and in the process Lloyd’s prompt service got me looking at a better way to do motorcycle tires that will save me a significant amount of money.  While I was over there I also did a round of photography to give you a sense of what goes on in this old school shop. 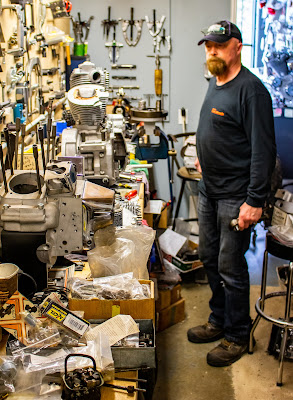 Lloyd has a number of customer projects on the go, and also makes a point of collecting older and vintage parts.  If you’re fan of Harley Davidson you should make a point of riding up to Elora and checking out what’s on hand – in many cases you’ll see parts that are so rare that you may never have seen them before, even if you’re into classic hogs.

Lloyd told me the story of a 1950s Harley racing motor he’d come across.  Only one of the two heads is accurate, but he’s on the lookout for a replacement – though seven decades old serviceable racing parts don’t survive well, as you can imagine.  When he has this rare piece of motorcycling history back together it’ll be one of the few remaining complete Panhead racing motors in existence.  You might think that’s a one off, but not in this shop.  Even if you’re not into HD, this place is an ode to moto-mechanical history and worth a stop.  Air cooled bikes have an aeronautical aesthetic to them that modern bikes often miss. 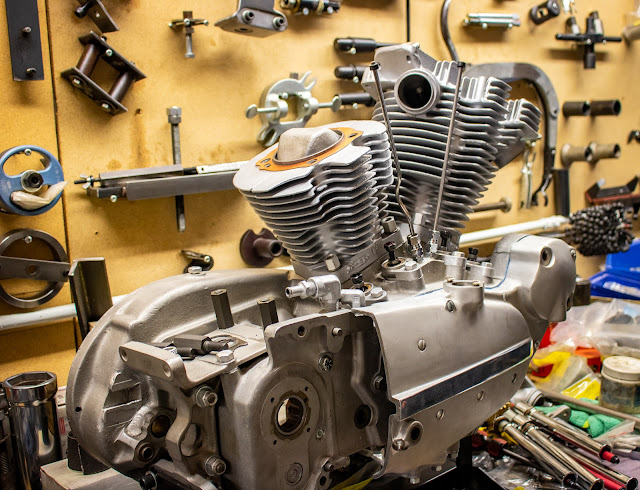 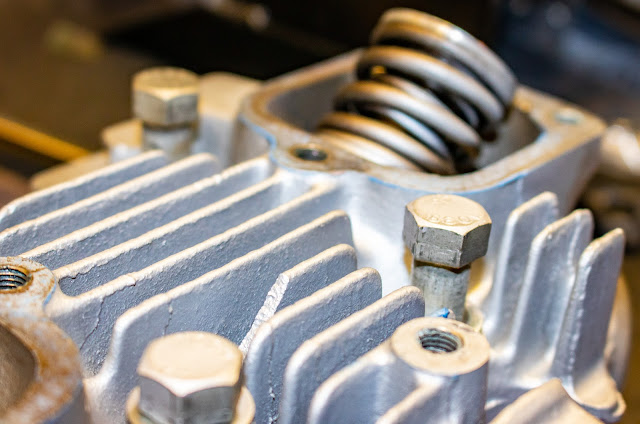 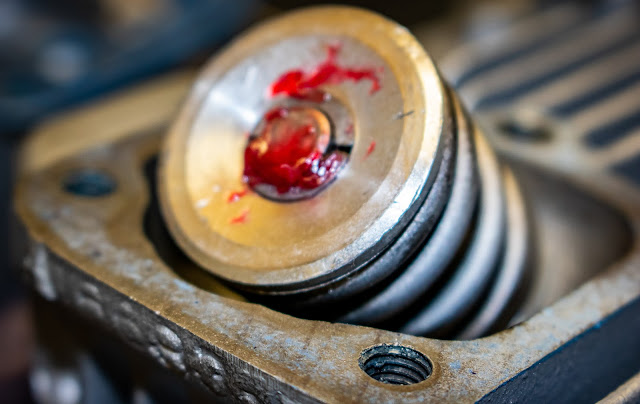 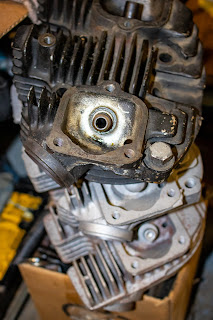 Being a restorer, Lloyd is always on the lookout for parts, and the shop is an ongoing work in progress, with parts coming in and getting sorted and stored until needed.  Previous customers, online and estate sales and various other connections like the Harley Owners Group mean Mostly Ironheads are able to draw in older parts, often found in boxes of ‘stuff’ that get dropped off.

Lloyd mentioned a customer who dropped off a box of stuff while clearing out space at home.  In the process of going through it they discovered an unopened complete carburetor assembly still in the original factory packaging from the mid-sixties!  There is a joy in bringing a piece of history like this back to life, and the joy is alive and well at Mostly Ironheads.  If you’re in Southern Ontario, it’s an easy ride up north of Guelph to the shop. 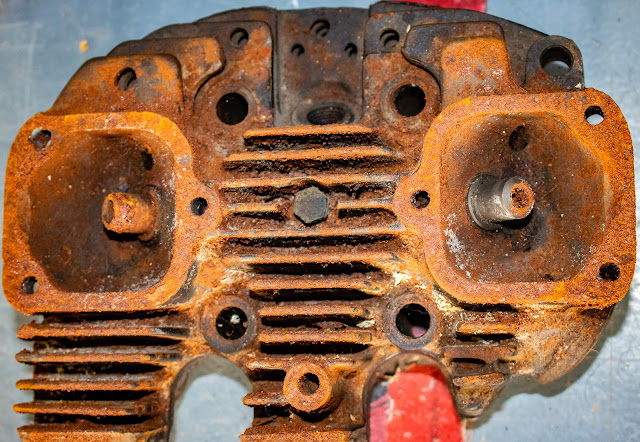 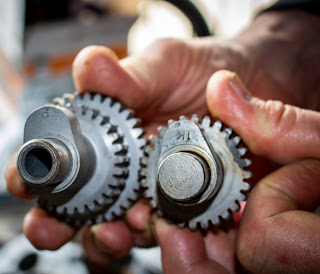 These are the cam lobes for that racing head compared to a typical one.  Not only is the racing cam lobe lighter with hollowed shaft, but it’s also heavier duty in terms of strength.  Here and here are good primers on cam profiles if you’re curious.  Whereas the right side regular cam is designed for long term use and efficiency, the more radical racing came on the left is designed to stay open longer, rev high and produce more power, though it wouldn’t idle well, get good mileage or run smoothly.  But when you’re aiming for all out speed, you’ll put up with that just so you can wind it up and go.  You’re unlikely to see mechanical history like this anywhere else in Ontario. 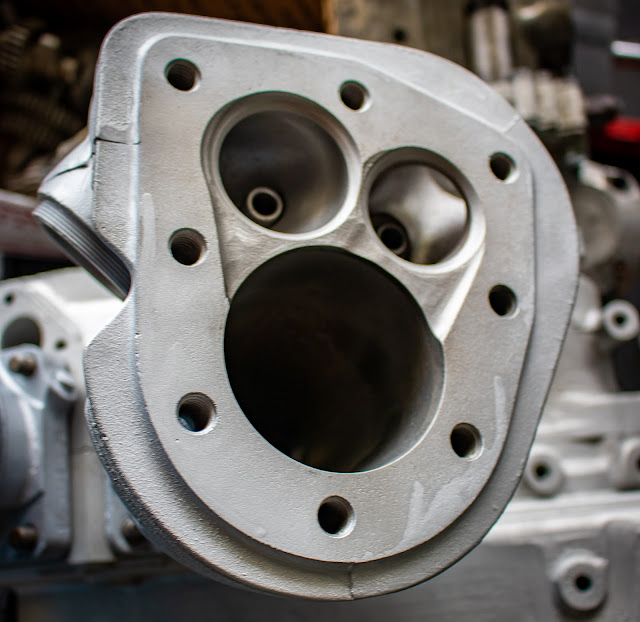 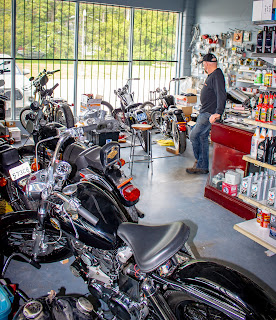 In addition to the restoration work going on, you’ll also find an eclectic mix of older, finished air cooled Harleys ranging from customized choppers to more standard rides.  If you’re into older, air cooled machinery, this will really float your boat.


Lloyd’s area of interest extends from post war bikes all the way up to the last of the air cooled, carburettor fed bikes.  If you’re into graphic design, you’ll see everything from post war art deco to sixties and seventies disco and eighties futurism in the logos and bike designs.


There are some core elements to Harleys (like v-twin engines), that evolve slowly, but design wise they’re much more in tune with their times than you might have assumed. 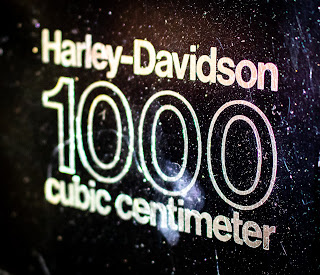 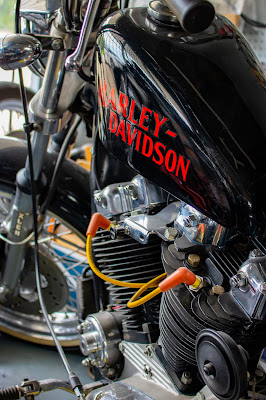 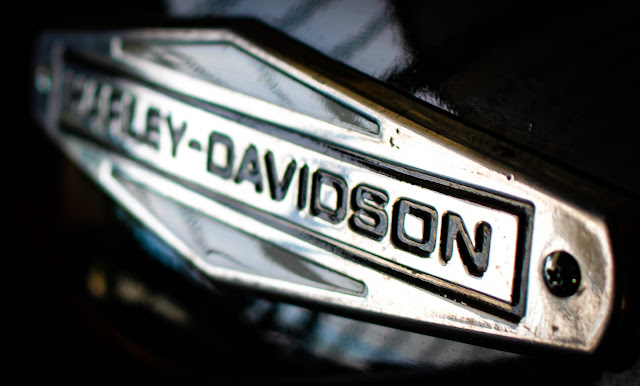 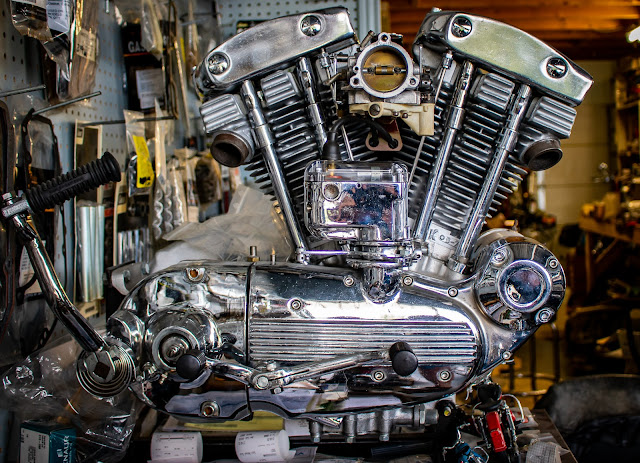 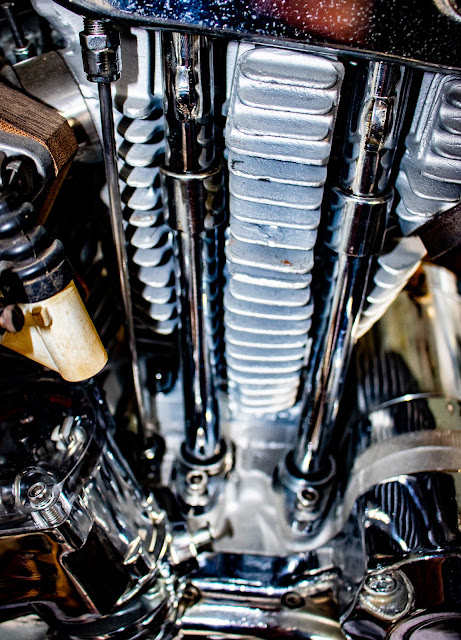 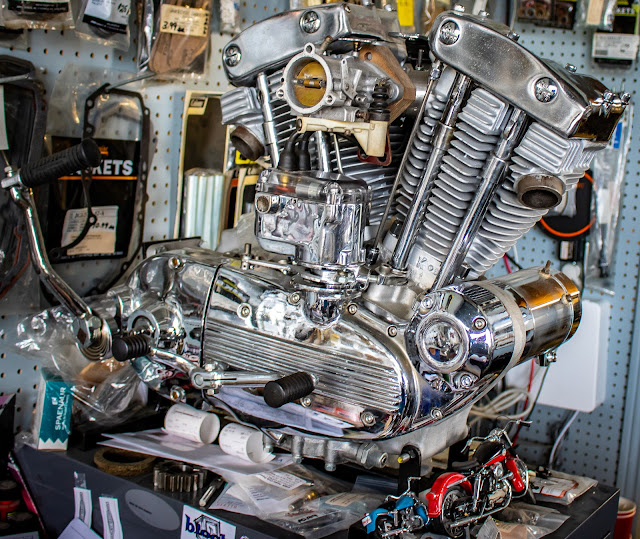 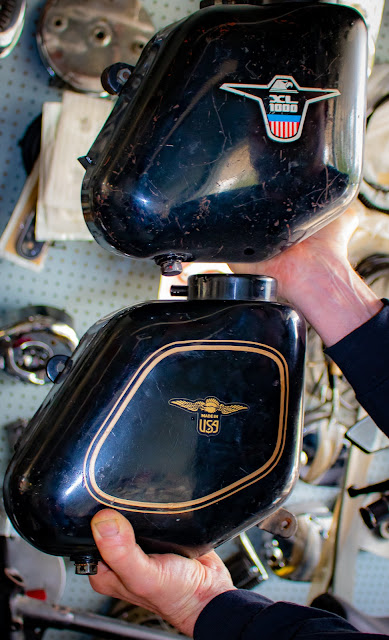 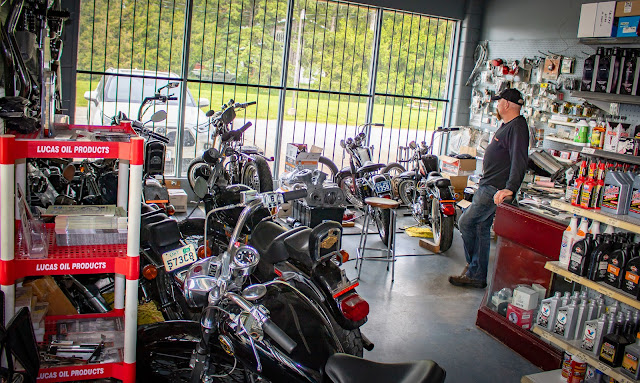