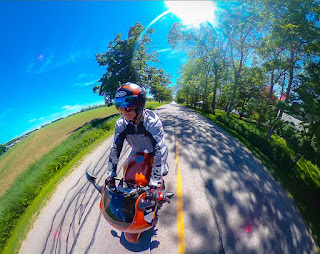 Now that the CBR900RR Fireblade project is sorted and on the road, I’m finding myself doing what the original intent was in getting it:  learning from a different type of motorcycle.  Unlike the heavy industry Kawasaki Concours, or the SUV of motorcycling Triumph Tiger, the ‘Blade was built to a different design brief. The other bikes were over engineered heavy to last, but the the Honda is a feather.


That philosophy is at odds with the heavy handed git who owned it before me and managed to maintain it into such a state of disrepair that it kept it off the road for years. 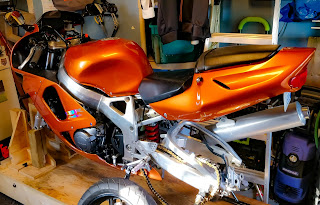 From the rear brake cylinder that was assembled backwards and over tightened, to the over tight wheels and the slipping clutch I’ve just adjusted to actually be at spec rather than over-tightened, I’m finding the Honda was a victim of a heavy hand and unsympathetic mechanical inclination.


When I was a teen my dad was talking me through a head gasket repair on one of my first cars.  We weren’t minted, so the only way I was driving was if I could keep an old car on the road; mechanical training was an implicit part of vehicle ownership for me growing up.  As we were tightening the head back on he made a point of talking me through the bolt pattern – always tightening opposite bolts so it would seat evenly, and then said something that I’ve never forgotten as we started tightening down the head:  “always one tight, not too tight.”  I guess the guy who abused this lovely piece of Honda engineering into years in a garage never got such good advice.


Mechanical sympathy is an important part of maintaining any machine, but especially a motorcycle, where if you are cack-handed you can end up seriously hurting yourself when it breaks.  In that way, motorcycle mechanics are a lot like aircraft mechanics, it’s a do it right or it can go very wrong kind of situation.


Part of that sympathy is taking the time to understand what the engineers who designed the machine want you to do in terms of looking after it.  In the case of the CBR900RR, Honda would like you to leave 10-20mm of play at the end of the clutch lever – this one was set so you could strum it like a guitar string.  This play is to ensure that the clutch fully disengages when you let go of it.  An over tightened clutch cable means it’s always set to be slightly pulling and engaging the clutch.  Making it too tight isn’t just a failure of the hands, it’s a failure in thinking that wounds the machine.  In this case, the over-tightened clutch cable explains why the ‘Blade was slipping RPMs when I opened it up.  A sympathetically tuned motorbike will give you a purity of interaction that allows you to more fully understand the machine.  This is one of the reasons why I value technical fluency so much, it puts your ability to operate technology into focus in a way that the technically ignorant will never realize. 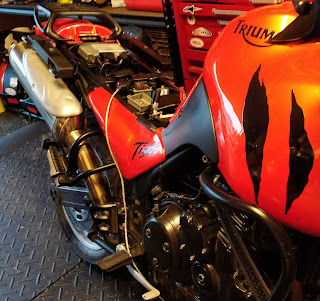 Meanwhile, in the land of Tim where he’s trying to keep a 17 year old European and a 23 year old Japanese bike rolling during the perilously short Canadian riding season, the Tiger’s stalling when hot continues.  I’ve ordered a replacement air idle control valve from Inglis Cycles, who have once again exceeded expectations during a pandemic by sourcing the part from Triumph in the UK and getting it to me in about a week.


One of the nice things about the Tiger is that it’s fuel injected, so all that carburetor management is taken care of, but the evil end of computerized fuel injection is that after seventy six thousand kilometres it’s finally gone wrong, and an electronic system like that can go wrong in a lot of different ways.

I’d never gotten into the Tuneboy Software that came with the Tiger (the original owner installed it along with a Power Commander), because if it ain’t broke, don’t fix it.  But now that it’s broke, I got going on it the other evening.  Getting into the bike via a computer was pretty cool.  The software is Y2K retro-hip and the connection was straightforward.  The 20+ pages of instructions weren’t really needed (I’m handy with computers).  Windows 10 automatically recognizes what you’re plugging in (back in the day, WinXP would have needed drivers installed), and the software is responsive and quick to connect.  It occasionally drops connection, but unplugging it and plugging it in again resolved that each time.

The compact disk (told ya, Y2K hip!) had all of the stock maps for my year of Triumph Tiger 955i engine on it, so I saved what was on there in case it was some kind of cool specialty map the previous owner had worked out (dude worked at a nuclear power plant, so don’t underestimate his tech skillz), and then I flashed it with the stock numbers, which took about 20 seconds and returned a confirmed result.  There is a slight lag, but otherwise this is easy to use stuff.

I then played with the diagnostics tool for a bit, hoping for some data that will help me isolate the hot idle stalling fault.  The software says there are no errors (promising that this is that mechanical failure then), and the only thing that looks out of place is a strange return on the engine temperature.  It seems to read accurately and then show -40, even when the fan is coming on, but if the fan is coming on and the temperature gauge on the dash is reading normally, I suspect this is something to do with how the software syncs with the on board computer rather than an actual fault, but I’m going to keep it in mind.


The problem with an idle fault on a fuel injected bike is that the engine management system is taking in data from a number of sensors and using it to balance engine activity, like idling, based on that information.  I’ve got the mechanical component that regulates idle on the bike incoming, and I hope that resolves the issue, but what I fear is that it’s something else, and with these complex electronics systems could mean that anything from a dozen different sensors or relays to a loose or broken wire.  With any luck, it’s that idle air control valve and I’m back on the Tiger… and the Honda, just not at the same time. 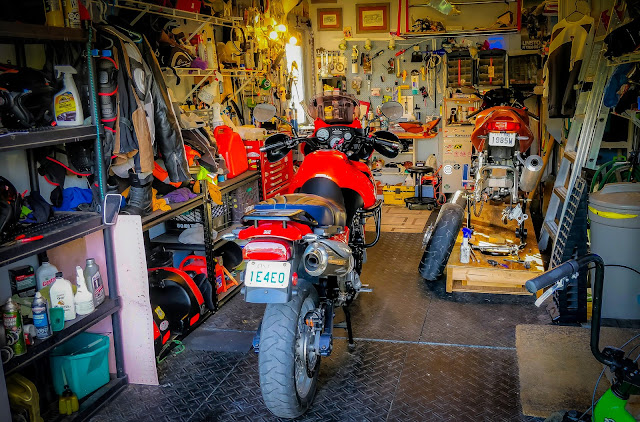