There was a time when I was loopy about cars, they were all I could think about.  That passion slowly faded as cars became an appliance to get me to work.  The freedom they once represented became an expectation.  You’re less inclined to fettle a car that you are depending on.

When I began riding a few years ago I rediscovered that passion.  Where driving a car is an expectation of adult life, riding is the exception, you’ve got to really want to do it.  It’s a more physically and mentally challenging mode of transport that demands more of you while also risking more of you.

The reward is being ‘in the wind’.  You are out in the world on an elemental machine that offers you a sense of immediacy that no car can match.  On top of the magic is a rational foundation of performance and cost.  My bike can out accelerate a Corvette while getting better mileage than a Prius, and it does it all while offering thrills unmatched on four wheels for a fraction of the cost.  You can also comfortably fit three bikes in a one car garage.  If you’re into vehicles as a passion, bikes take the cake in terms of economy and performance.

You might say, ‘hang on, what about super cars?”  You’re not going to find them particularly economical, but surely they are better performing.  Cycle World magazine recently did an article on just that.  The ‘Vette got buried by everything there.  The Kawasaki H2 was the fastest machine to 60 and 100.  The only place it lost out was top speed to the Mclaren P1, which topped out fifteen miles per hour faster thanks to some fancy aerodynamic bodywork.

This might be the moment that cars take back the performance crown, but it’ll cost ya.  The McLaren P1 goes for $1,150,000US (just over $1.5 million Canadian), and they’re sold out.  The H2 will cost you $27,500 Canadian, and with some aerodynamic tweaking borrowed from the H2R (I think I’d make my own carbon bodywork), an Akrapovič exhaust that’ll increase power, sound fantastic and shave off almost six kilos (€1,415, or about $2125 Canadian dollars), it’d be a beast.  Add in some power commander kit to electronically improve engine output and you’ll have an H2 that will be fastest, period.

The tweaked H2 would set you back about $31,500.  With some carbon bodywork to aid high speed passage through the air, you’d still be under forty grand.

I once dreamed of super cars.  Now I’d happily go for the H2 with some steps toward an H2R, have something rare, beautiful and fastest, and save myself 97.5% of the cost of the McLaren.  My mid-life motorcycle fixation is eminently reasonable compared to the irrational fetish of the super car, now solely reserved for the one percenter.

Motorcycles are democratic… speed for everyone! 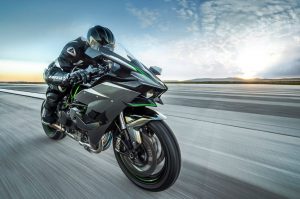