This started in June with intermittent stalling.  I’ve done all the obvious things like spark plugs, fuel and air filters, but the problem persisted intermittently, so I had another go at it in July.  The Tiger has been my go-to ride for over four years now.  I’ve put over twenty-seven thousand kilometres on it, and up until this year it’s been as dependable as a sunrise.


This week I chased down some other possible electrical issues.  The ECU was covered in muck so I cleaned it up and sealed the plastic underbody around it so it won’t get mucky again any time soon.  I then found out how to test the ECU relay under the seat:

Everything else is sorted on the bike, so I’m down to the valves, which I really should have done in the winter.  I’m now between a rock and a hard place since I’m not sure I’m hanging on to the Tiger and it takes weird, old 25mm over bucket shims that Japanese bikes haven’t used since the ’80s.  Modern bikes use much smaller under bucket shims.   My nearest dealer is far away and dropping off the bike there would be a real hassle, so I’m looking at getting the Triumph valve shim removal tool T3880012.  But you don’t need that if you’re willing to remove the cams, so now I’m elbow deep into pulling most of the top end out if I want to avoid getting a special tool for a bike I’m selling on.


On the other hand, one of the reasons I got into bikes was to get back into mechanics, and any self respecting rider should know how to do valves, so I’m kinda keen to do the job since I haven’t done it yet.  I’m just shying away from sidelining my long distance motorbike in the middle of a too-short Canadian riding season while I wait for COVID crippled parts delivery on a 17 year old European bike.  The valves need doing anyway, but doing them might still not sort out the stalling issue, which would be very aggravating.

If I can move the Honda on I’d get the C14 Concours I’ve been eyeing and then the Tiger could take as much spa time as it needed.  I just had the Honda up for a few days in the four thousands, which is high for what it is, and only got an offer for a trade.  I’m going to put it up this week in the threes and see if it goes, then I can do some shuffling and take the weight of expectations off the old Tiger.


Why higher revving bike engines have bikes have solid rather than hydraulic valve lifters that need adjusting (cars and Harleys rev less and so use hydraulic/self adjusting valve lifters:  www.quora.com/Why-do-motorcycles-require-valve-adjustments-when-automobiles-dont-require-them


www.bikesrepublic.com/featured/checking-bikes-valve-clearance-important/
Why checking your valve adjustment is important.


Local advice on how hard it is to find 25mm shims for the Triumph 955i engine: www.gtamotorcycle.com/xf/threads/help-looking-for-25mm-valve-shims.201738/


Some 955i engines are under bucket shims, the Tiger has over bucket shims (which is why the tool is needed if you don’t want to remove the cam):  www.triumphrat.net/threads/05-955i-valve-shims.6986/


Good advice on when to do your valve clearances (when you stop hearing the valves ‘rustle’): www.mikesxs.net/25mm-valve-shims-sizes-2-30-to-3-10-honda-yamaha-triumph.html 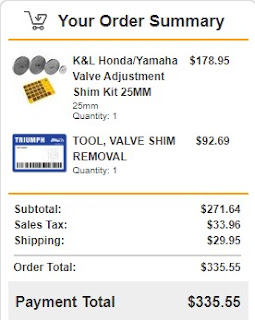 BikeBandit has the tool (1-2 week wait, and a 25mm shim set for $335US/$455CAD because even though the US is making a mess of COVID19, their currency seems to be immune to their poor management.

At this point I’m stuck between over four hundred bucks in tools, parts and the opportunity to do my first valve adjustment and whatever Inglis Cycle gets back to me with costs wise – though that’ll also include having to get it over 140kms down there and get it back again on another day.  If they get back to me with a price north of $600 and a long delay in getting it done, I’ll be going after the tools to DIY it, though I don’t want to go crazy with a fancy set of 25mm shims when most modern bikes don’t seem to use these big over bucket shims any more.


If I can move the Honda, I could get the C14 Concours and then have time to work on the Tiger without depending on it as my main long distance tool.  On the other hand, selling the Honda means I’ve just sold the only bike that’s working right at the moment.  The Tiger picked a bad time during the summer of COVID to tighten up on me, though I’m well past when the valves should have been checked so I only really have myself to blame.