While in Arizona we went out horseback riding for a couple of hours.  I hadn’t ridden a horse since I was a kid (almost forty years ago – back then they were tiny prehistoric horses).  I got Butch, who liked to eat a lot and thought it a good idea to stick his nose up the horse in front’s ass to get it back to the paddock early for lunch.  He managed to piss off half a dozen horses doing this.

I ended up with mighty sore knees because I kept weight on the stirrups for the entire ride.  Partly because it was suggested and partly because it took weight off the horse’s back.

Working with an animal is a very different process than inhabiting a machine.  I imagine that developing a longer term relationship with the creature eases the guilt I was feeling over using the animal.  If I knew that Butch enjoyed taking people out and going for a walk I’d have been a lot happier with bothering him with it.  His habit of rushing the other horses suggested that he wasn’t enjoying hauling my heaviness around though.

How different is riding a horse from asking a taxi to drive you somewhere?  In both cases you’re paying an organization to provide an animal that will transport you (one a horse, the other a machine assisted human).  In the case of the taxi driver you can at least communicate with them and get a sense of their willingness to do the work.  You can probably do that with the horse too, but the non-verbal communication takes longer to figure out. 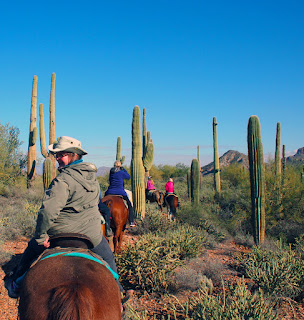 I don’t worry about my largeness (6’3″ 240lbs) hurting a motorcycle but it was on my mind with the horse, even though they gave me one of the biggest ones they had.  My animal empathy is overdeveloped, no doubt, but even with a machine I still sympathize with its situation, it’s one of the reasons I take care of mine so diligently.  With an animal I’m unfamiliar with I’m not clear on our relationship.  If the animal doesn’t want to be there it sours the experience.  Put another way, I’ve never met a motorcycle that wasn’t eager to be ridden – it’s their purpose.  We might have domesticated horses but their reason for being isn’t to carry people around.

While machines may have their problems they have also offered us an opportunity to stop using many animals as chattel for our own ends.

I enjoyed the horse ride and I’d do it again, but it would be nice to better understand the horse and their situation.  Knowing that a horse was excited to see me and go out would go a long way toward enjoying the ride more in the same way that taking out an excited dog for a walk is a positive process.  Two days before our rental horse ride I took a rental motorcycle out for the day and didn’t have anything like the same moral quandary, though perhaps I should have.