I’ve enjoyed machines since I was a child.  My father is a mechanic and engineer and his fearless approach to maintaining, repairing and operating machines amazed and intrigued me.  With that fascination I always found it easy to empathize with machines, not necessarily in the anthropomorphic give them a name and talk to them kind of way many people do, but to suggest a machine has personality expressed in how it operates isn’t strange to me. 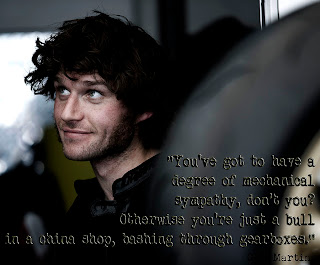 In the last post I talked about how a MotoGP rider was a much larger piece of the equation than a Formula 1 driver is.  That expression of skill through machinery is what interests me about motorsport, the high tech frills are just that, frills.  What I want to do this morning (it’s 5am and the world is silent and dark, the people are all asleep and the mental static is at a minimum) is to unpack what machines are and why they are worthy of empathy.

Machines are our thoughts given substance.  When I get on the Ninja and go for a ride I’m experiencing a confluence of thinking, dozens of engineers and designers who pieced together a rolling sculpture that best expresses their ideas of efficiency, beauty and inter-connectivity.  You seldom get to experience the mind of another person is so intimate a way as you do when operating a machine that they have created.  It’s little wonder that many engineers and designers feel that the mechanical devices they produce are like their children.

You can approach this from a couple of interesting reads.  Matt Crawford’s Shop Class As Soulcraft focuses on the understanding you develop from laying hands on your machine yourself.  As a treatise on the value of hands-on mechanical experience and the development of that mechanical sympathy Guy Martin mentions above, it is priceless.

Melissa Holbrook-Pierson’s The Man Who Would Stop At Nothing comes at it from the riding experience and how motorcycles in particular can reach into you and animate you in a way that many other machines cannot.

There is a virtue in motorcycles that is also why so many people don’t partake of them.  They demand so many inputs from the rider that they make driving a car seem like running a washing machine; merely the operation of an appliance.  This is so endemic to driving a car that every opportunity to interact with the vehicle is being diminished, from manual transmissions to parking.  In a few years many will flock to self driven vehicles and become forever passengers.  The vast majority of people have little interest in how a machine works or how to express themselves through it – perhaps because they have nothing to express.

That motorcycles are so demanding is a virtue from the point of view of a mechanical empath.  The more interaction you have with the machine, the more possible it is to inhabit it with human expression.  There is something pure in the mechanical simplicity of the motorcycle, it is bare, naked, not covered in sheet metal designed to conceal and contrive; its function is obvious.

That this naked machine demands so much from its rider creates a giddy kind of connection in those willing and able to make it.  This machine connects to your hands, feet and whole body.  It demands inputs from every one of your limbs as well as your entire mass.  Being naked on the road, the rider’s mind isn’t isolated from their activity and is as engaged as their physical body.  Inhabiting a machine this completely is an intoxifying experience.

The thrill of inhabiting a machine isn’t limited to motorcycles, though they are one of the purest expressions I’ve found.  The satisfaction in fixing, maintaining or operating any machine well offers some degree of satisfaction.  In inhabiting the machine it empowers us, giving us abilities that would seem magical to non-technological people.  We can cover ground at great speed, communicate across the world with the push of a button, fly, even slip the surly bonds of Earth and touch the sky, but not if we don’t inhabit the machines that enable us.

If we remove ourselves from this equation machines become limitations rather than a means of expression.  The thought of a human being interacting with a responsive, demanding and complex machine offers us a future that is bursting with opportunity for growth.  The alternative is stagnation and ignorance.  You can guess which approach appeals to a consumerist culture intent on selling to as many people as possible.

That a machine should place demands on us isn’t a bad thing, especially if it leads to a nuanced awareness of our own limitations.  The machine that can overextend you, challenge you, stress you, is a machine that can teach you something.  We fool ourselves into stagnation when we design machines that do more and ask less from us.

When I see human expression through a machine, the machine becomes a magnifying glass for their achievement, how can that not deserve empathy?  The only time it wouldn’t is when the human is a pointless addition to the equation. When this happens machines become oppressive rather than enabling forces in our lives.