Skip to content
There are a number of posts on this blog about working out the kinks in my 2003 Triumph Tiger 955i,

this is another one.  I’ve been playing with the Tuneboy engine management software that came with the bike, which works well, is put together well and is easy to use.  In working with the Tuneboy kit I discovered TUNEECU, a more open-source option for programming your own engine maps.

If you’ve never wrapped your head around engine maps, they’re not very complicated.  Tuneboy does a good job of explaining how it works in their primer that comes with their software.

Back in the day you had a carburetor that used screws and jets to set the amount of fuel that got metered into the engine.   If you changed altitude you had to start swapping hard parts (usually the jets that sprayed fuel) to keep the bike running right, and sooner than later you had to manually trim the whole thing to keep it running right.  Electronic fuel injection took that all away.  A computer under the passenger seat on the Tiger takes inputs from sensors in the air-box (barometric pressure), in each of the three injectors , the fuel pump, radiator (engine temperature) and a crankcase sensor to constantly adjust things to use the most effective amount of fuel to make the bike go.  Put another way, carburetors are a mechanical, low resolution solution to feeding fuel into an engine.  Electronic fuel injection is a responsive, high resolution fix to the problem of delivering the right amount of fuel to a motor.

A fuel map is a spreadsheet of numbers.  Sensors feed the computer what RPM the engine is turning at and how much throttle is being asked for and based on the number in the fuel map, the computer delivers a set amount of fuel.  The ‘fuel map’ is literally a map that directs the computer to deliver a set amount of fuel.  If you’re at high RPM and have just shut off the throttle, a smart EFI system will cut fuel delivery entirely, saving both fuel and emissions, something a carb couldn’t manage.  If you suddenly give the bike a handful of throttle at low RPM, the map will direct the fuel injectors to deliver an optimal amount of fuel as it picks up speed, whereas a carb will always just send a mechanically set amount of fuel based only on how much wrist you’re giving it. 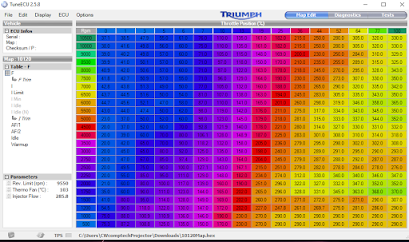 In Tuneboy’s system, you can change fueling and ignition maps, and modify things like idle speeds. The issue has been that the only maps I can find for Tuneboy are the stock ones from Triumph, which were set up to favour fuel economy and emissions over smoothness and drive-ability.  Meanwhile, TUNEECU (if you can navigate their 90’s style web design and atrocious apostrophe use) offers you modified tunes that can smooth out your lumpy OEM map.

Of special interest to me were custom edits that made the list and have been on there for 9 years.  I don’t know who Deano from South Africa/SA_Rider is, but they know their stuff.  The map on there does wonders for your Tiger’s smoothness and pickup.  It might use a bit more fuel if you’re heavy handed, but the difference in motor operation is impressive and worth it.

I was unable to find a digital tool to transpose the HEX files from TuneECU into my Tuneboy DAT format, so I opened up the modified HEX file and transposed the numbers over to the Default Tuneboy 10120 Triumph engine map and resaved it.  You can find that modified Tuneboy DAT file with the TuneECU South African mode here.
Finding this stuff isn’t easy, and it’s only getting harder as these old bike recede into the past, so I’m hoping this post help you find what you need to get your Tiger purring again.  It did wonders for mine.