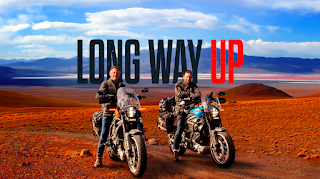 My escape is usually to find some motorcycle media to get lost in but a theme this week in it was ‘getting old’, which is a tricky one to navigate.  I’ve started watching Long Way Up and seeing two of my favourite adventure motorcyclists getting old is difficult.  I got into Long Way Round and Long Way Down early on in my motorcycling career and they’ve saved me from many a long Canadian winter.  I’m up to episode four now and they’ve hit their stride and are coming close to their earlier trips, but watching everyone looking for their reading glasses and groaning as they saddle up has been difficult to watch.

Many moons ago I read Melissa Holbrook Pierson’s The Man Who Would Stop At Nothing.  In it she makes the startling observation that one day everyone realizes they’re probably having their last ever motorcycle ride.  It’s a terrifying thought that has come up in TMD before in For Whom The Bell Tolls.

Long Way Up happened because Charlie almost killed himself and it prompted Ewan to reconnect with him again after they’d drifted apart when Ewan moved to the US.  Maintaining friendships among men as they age seems to be exceptionally difficult these days.  I recently worked on a charity program for The Distinguished Gentleman’s Ride that considered ways to keep men socially connected as they age.  Speaking from personal experience, getting older is a lonely experience.  Men seem uniquely suited to doing it poorly in the modern world.  As I watch the boys figure out their new fangled electric bikes and work their way out of deepest, darkest Patagonia it’s nice to see the power of travel and challenge bring back some sense of their former selves, we should all be so lucky.
Harley Davidson’s involvement in the program has been fascinating.  I can hand on heart say that I’ve never once had the remotest interest in owning one of their tractors.  I don’t like the brand or the image, but what they did with Long Way Up was daring in a way that KTM was incapable of being way back when they did the first one in the early naughties.  I admire that kind of bravery, especially when it’s with such untested technology.  Harley’s involvement in Long Way Up is even braver than BMW’s has been in previous trips where they provided the measure of long distance adventure travel that had been evolved and refined over decades.  Even with all that it sure did seem to break down a lot though.  That the bikes appear to be doing so well doing long distance adventure travel when our battery technology is so medieval makes me wonder why the brand clings so tightly to its conservative cruiser image, they could be so much more than big wheels for red necks.  If I had the means I’d drop thirty large on a Livewire tomorrow (I’m a school teacher, there ain’t no thirty grand bikes in my future). 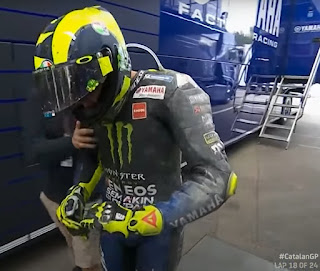 While I was acclimatizing myself to the reading glasses and stiff joints of the Long Way Up I also watched the Barcelona MotoGP race.  Valentino Rossi is an astonishing 41 years old and still a regular top ten finisher in this young man’s sport.  He managed his 199th podium finish earlier this year and looked like he was on track to hit 200 podiums in the top class this weekend when his bike fell out from under him while in a safe second place.  It was tough to watch that opportunity fall away from him after he lined everything up so well, but old muscles don’t react as quickly, though Vale was hardly the only one to crash out of the race.  I’m hoping he can make that 200th podium happen, but it’s just a number and if he doesn’t, who really cares?  He’s still the GOAT and will be until someone else wins championships on multiple manufactures across multiple decades through radical evolutions in technology.  He managed wins on everything from insane 500cc two strokes through massive evolutionary changes to the latest digital four stroke machines.  Winning year after year on the top manufacturer on a similar bike just ain’t gonna cut it if you want to be GOAT.
He just signed a contract for another year with one of the top teams (Petronas) in the top class of MotoGP.  He has battled against generations of riders who have come up, peaked and been beaten to a pulp by this relentless sport, and he still seems able to summon the drive and discipline to compete at the highest level.  If that isn’t Greatest Of All Time inspirational I don’t know what is.  I suspect Charlie Boorman might empathize with him.  Charlie’s another one who doesn’t know when to stop, even when he probably should.  Watching him bend his broken body onto his bike in Long Way Up is also inspirational in a way.
It all reminds me of a poem…
Do not go gentle into that good night,
Old age should burn and rave at close of day;
Rage, rage against the dying of the light.
Though wise men at their end know dark is right,
Because their words had forked no lightning they
Do not go gentle into that good night.
Good men, the last wave by, crying how bright
Their frail deeds might have danced in a green bay,
Rage, rage against the dying of the light.
Wild men who caught and sang the sun in flight,
And learn, too late, they grieved it on its way,
Do not go gentle into that good night.
Grave men, near death, who see with blinding sight
Blind eyes could blaze like meteors and be gay,
Rage, rage against the dying of the light.
And you, my father, there on the sad height,
Curse, bless, me now with your fierce tears, I pray.
Do not go gentle into that good night.
Rage, rage against the dying of the light.
Dylan Thomas
Fucken ‘eh.