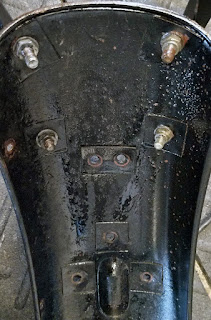 I’m in the process or stripping the last bits of hardware from the frame and bodywork in order to clean up and paint the frame and bodywork on the 51 year old Bonneville project bike.  The bolts holding the licence plate holder onto the rear fender were 4 different sizes with the longest ones protruding so far toward the wheel that they’d be a safety hazzard on a big bump (the tire would make contact with them on full suspension compression, especially with me on it).

I was talking to a friend online who made a career out of flying helicopters for the military and he said he’s found wrong sized hardware in controls that have actually jeopardized flight safety.  One of the rhings I enjoy about motorcycle mechanics is that it feels closer to aviation than four wheel appliance repair where an error like this might cause you inconvenience as you roll to a stop on the side of the road.  If you’re up in the air or out on a bike and you have a catasrophic mechanical failure, it’s a very different consequence.

Another pilot friend (the perils of being an air cadet), when we were going up for a flight in a Cessna, brought it back around and landed when the engine didn’t feel right.  Everyone was impatient at the delay, but he said something that is simply true that many people don’t consider when their flight is delayed:  “it’s better to be down here wishing you were up there, than being up there wishing you were down here.”  It’s a shame more people who work on bikes don’t think the same way.  I’ve seen even professional work that was half assed to save time/money.  Incompetence like that puts a rider’s life at risk needlessly.  It can end up costing you far more than you saved.

The 14-0101 bolts used to fasten the fenders on the ’71 Bonneville are 1/4″ X 1/2″ X 28 UNF, which are a bugger to try and find a match for.  The longest bolt on the bike was an inch and a half – way too long for where it was.  Working with SAE/imperial sizes on this bike makes it a real pain to match hardware out of what I have on hand, but stuffing a bolt that long onto a bike where it can interfere with the wheel isn’t sensible.

1/4″ bolts can be replaced with an 11mm metric option and finding stainless steel versions of these are easy.  I can also get four matching that are the correct length for the job at hand rather than bunging whatever I have in the toolbox onto the bike.  Compared to other costs in this restoration, hardware costs are trivial (for under $40CAD I can get a 900+ piece kit).  When I’m dropping $600+ on a new head, spending a bit on properly sized bolts seems like a no-brainer.

Of course, body panel fasteners are a different proposition to what you put into a motor or transimssion – in those cases I’d always use stock pieces to manage the heat and pressures involved as decided by the engineers to designed the thing, but for bodywork there is a bit more latitude, you just don’t want to be a pratt about it.

The Amazon bolt set arrived in less than 24 hours.  It is (of course) snowing today in mid-April in Canada, so moving the other bikes out of the garage to paint things isn’t likely, and I can’t paint outside if it’s snowing.  You need 10°-30°C temperatures, no direcf sunlight and good ventilation.  If I can get the other bikes out of the garage, open the door a foot and run the fan, I might be able to retain enough heat to do it, but Canada’s ‘spring time’ isn’t helping things along.

If had a wee outdoor shed I’d use it as a paint booth, heating it to the required temperature and then having a fan to move the overspray out.  This DIY paintbooth would be a thing if I had a larger workshop, but a shed outside is a real possibility.  It could provide storage, freeing up space in the garage, but with some crafty ventilation it’d also be a paintbooth.  If I don’t get to painting today, I can at least finish prepping the frame and body panels and hope for warmer temperatures later in the week.