I spent some sweaty hours this weekend de-blacking the Ninja.  The coolant got flushed as I was waiting for paint to dry.  With the fairings off I got more done than I intended.  I stripped the tank and repainted it, my first attempt and recovering the stripped back to blue paint.

I was able to find a metallic blue that would work with the Ninja original Candy Plasma Blue.  Going on it looks almost identical, but it dries a darker blue, a more royal blue, though since it’s metallic it pops like the original factory metallic paint does.  The paint I found was Rustoleum’s Metallic Cobalt Blue.  It’s readily available, I found it at Homedepot. 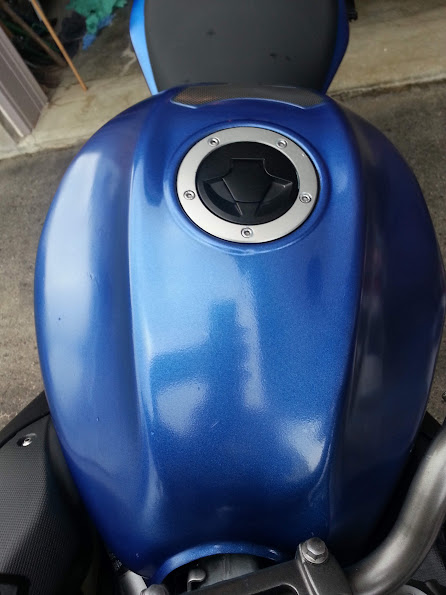 After laying a couple of coats of the new blue, I followed it up with a couple of coats of a gloss clear coat.  The picture of the tank on the right shows you what kind of finish you can get out of these basic tools.  It won’t satisfy a perfectionist, but at under $20 to paint the front fender and tank, it will satisfy your accountant.  I waxed it once everything set (I let it sit for half a day), and it looks pretty sharp.  I’ve driven it 200kms so far this week since and no scuffs or scratches on the paint, so it’s pretty tough too, even after an impromptu ride through a driving hail/thunder storm.

I could agonize over stockness here, but I don’t think I will.  The vision I’ve got for the bike isn’t stock anyway, but it’s a far cry from the flat black bike I started with.  I’m still working out the orange for the frame.  I’ve got a gloss red and a gloss yellow and intend to mix my own.  The only oranges available seem to be traffic cone inspired (see the pics below), I’m going for a burnt orange as an opposing colour to the royal blue.

From the pictures you can see that the blues are mighty close, though the camera does flatten the differences a bit.  When you’re up close you can see where the new paint is slightly darker, though just as rich and metallic.  With the clear coat on top it’s silky smooth to the touch and polishes up nicely with wax.  I’ve been riding in rain all week and everything now beads off where it used to just get wet and sticky on the flat black.

While I’ve got the fairings off to do the frame, I’ll have another go at the blue on the big front fairings.  It’s a time consuming, tiring process taking that black off, so the fairings might be a while longer before I get them done, then I can finally call my beaten up black bike blue again.