It’s on this year and this time it’s a four event season! If you’re anywhere near Ontario hop on your bike and come along for a great day of riding: Sunday June 11th, Saturday July 22nd, Saturday August 19th and Friday October 13th. Pick your day(s)! Last summer my motorcycle buddy Jeff and I did our first long distance motorcycle scavenger hunt/rally, it was a blast! We spent an exhausting, hot, August day covering more miles than anyone else. Our lousy trip planning skills aside, we had a great day seeing all sorts of hidden spots we’d never seen before.  I just found out that Lobo Loco is back for 2017, and bigger than ever! The idea of this kind of rally is that you begin from wherever you are at 8am with a gas receipt to set your starting place.  From there you find your way to gps points shared with you a week before.  Different places are worth different points depending on how hard they are to get to.  You can go after themed stops to try and get the highest points in a particular category or go for the rally win by planning out a route that collects you the most points quickly.  Or you can just take it easy and pootle about, enjoying the camaraderie that is infectious in an event like this.  You’ll be seeing a lot of other competitors on your travels.

Last year Jeff and I decided to ride out of the cities because neither of us really like riding in the urban pall.  We rode along miles of country roads through scenic little towns all the way to the shores of Huron before working our way back to Brantford, arriving with three whole minutes to spare. We did it on our big adventure bikes, but the parking lot at the end of the race had everything from a 200cc Yamaha to massive Harley v-twins, and everything in between.  There is no ‘right’ bike to do this sort of thing on.  There is no ‘right’ way to plan your route (though we missed top score by thousands of points, so I don’t really know what I’m talking about).  We had a great time doing our high mileage country route.  Others had a blast cashing in on close together points locations in the Greater Toronto Area.
Whatever you like to ride, however you like to ride, you can customize the Lobo Loco Scavenger Hunt to how you want to do it.  We ended up being the only people to make it to the bee beard for huge points because it was in the middle of nowhere and was only happening for about half an hour (no one else was crazy or quick enough to try it!).  Our half assed approach got us the top bee keeping score and the longest ride iron butt award.
If you’re looking for a single day event that is both fun and will show you new places you’d never otherwise find in your own backyard, the Lobo Loco Rally is your ticket.  The first ride this year (the WTF Rally) happens on Sunday, June 11th.  Here are the specs from the website:
WTF Rally
“Weird Things Found”
… or something like that…
​Sunday, June 11th, 2017
​
This is our first of 4 Events for 2017.  We’re going to start the season off with an easier and fun Scavenger Hunt Rally.  You’ll be rolling 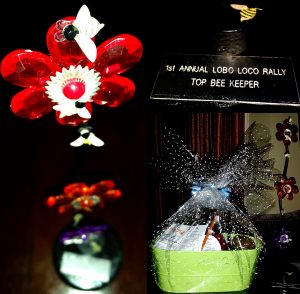 through the back roads of Southern Ontario stopping to take pictures of some of the most bizarre roadside items, signs, or places… things that will make you say, “WTF?!”
​
8 Hour Rally – Remote Start
​8:00am Start
Start ANYWHERE in Southern Ontario.
The Finish Line is in Woodstock, ON
Scoring begins at 3:00pm
Time Penalties begin to accrue at 4:00pm
DNF if not at the Finish Line by 5:00pm
​ALL YOU CAN EAT DINNER BUFFET and AWARDS BANQUET begins at 5:30pm
​$80 per Rider, or $100 for 1 Bike – 2 Up Team Riders
I’m aiming to be there.  Hope to see you at the buffet.  Sign up here.

Can you make your way to Woodstock, Ontario on October 15th?  The second ever Lobo Loco long distance motorcycle rally runs on that day.  I had a blast at the first one and want another go.

The rally is on the verge of getting enough people to run.  If you’re in the North Eastern US, Quebec or Ontario or Michigan/Ohio, and can make it out to Woodstock, Ontario on October 15th, you won’t be disappointed. 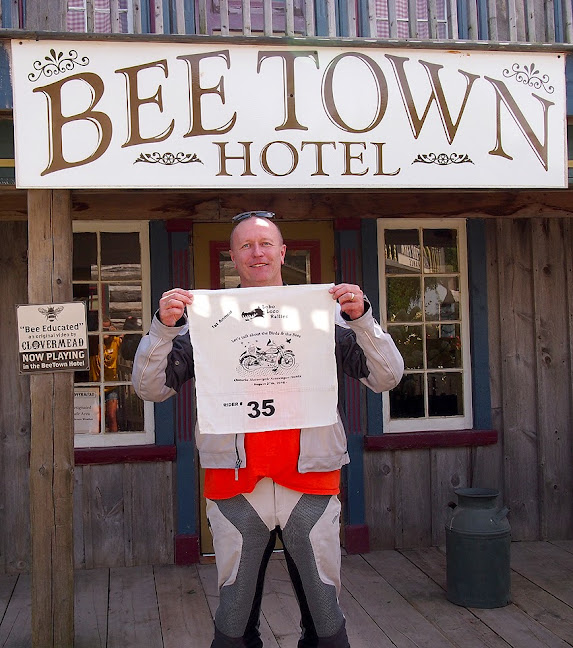 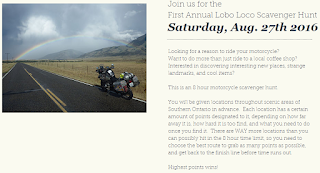 I just signed up for the Lobo Loco Scavenger Hunt on August 27th.  You can still sign up if you’re in Ontario and want to try a motorcycle scavenger hunt/rally.

It looks to be a good time.  You start off any time after 8am from somewhere in Southern Ontario and finish up in Hamilton by 4pm.  Dinner follows with the other rally contestants.  It’s $75 for the rally & dinner.


You try and hit as many way points as possible on your way to the 4pm meeting in Hamilton.  It should be interesting to see the various bikes and riders who sign up for this.

They include a video which explains how this type of rally works: 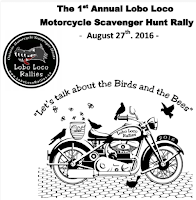 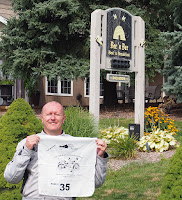 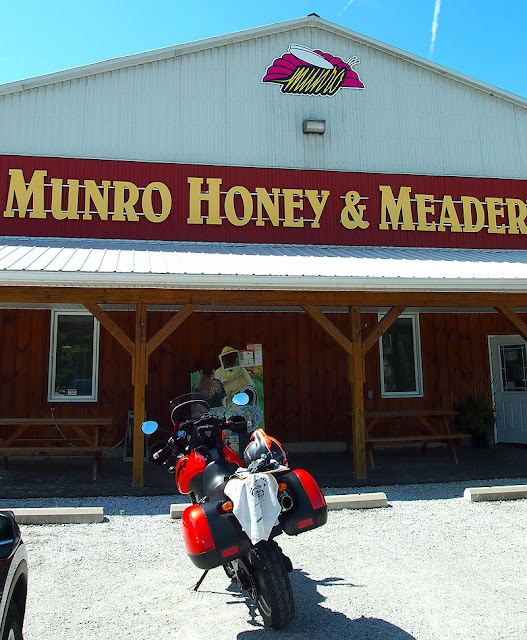