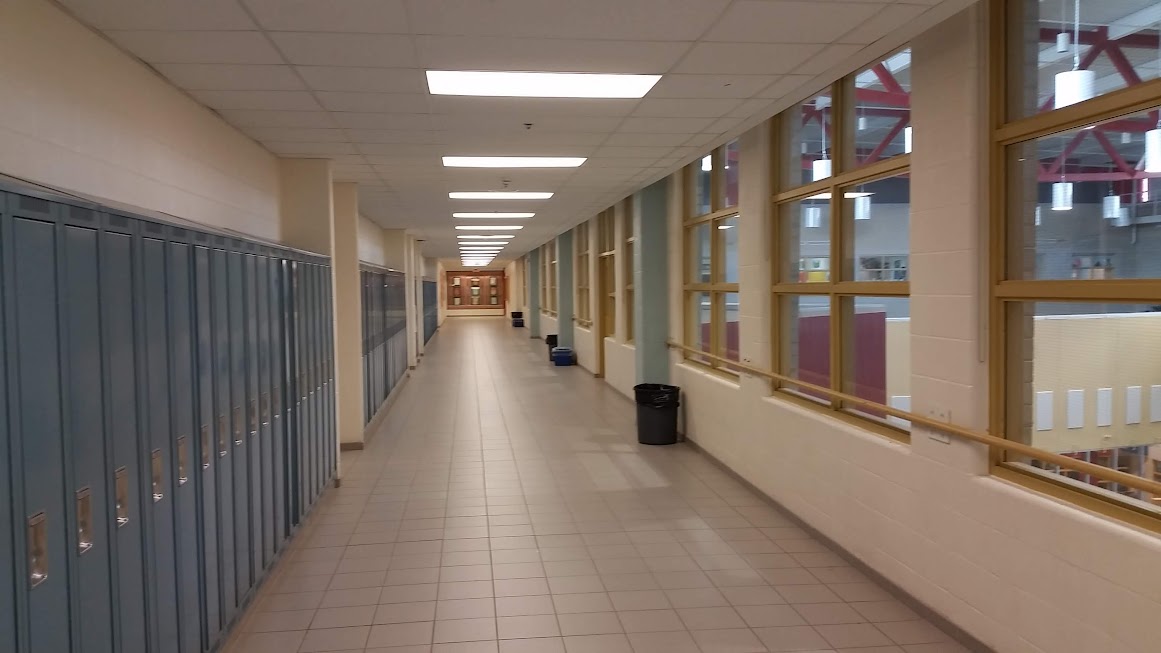 Over heard the other day while everyone was getting ready for the first day of school:  “It’s clean, everything is where it’s supposed to be, it’s perfect!”

I disagree.  This is as far from perfect as a school can get.  Give it a few weeks full of messy, chaotic learning and then it will start to approach the kind of perfection a school is capable of.

I can’t wait to take the shine off it!

We had one of our few professional development days last week (this one on metacognition) and I had a moment of insight in spite of the circumstances.

For the better part of three hours we were sitting on too-small benches designed for children in a large, drafty, echo-y cafeteria listening to booming, static-y microphones and online videos.  It was a near perfect storm of poor environmental factors around learning for me.  I’m not a good auditory learner at the best of times, when barriers to listening are in place I quickly fall off the engagement wagon, though I try to hang on.

Why was our professional development done here?  Because we could fit two schools worth of teachers into that space.  When teachers don’t consider basic pedagogical factors in teaching each other, it makes me wonder what happens in their classrooms (also designed to fit as many bodies as possible).

What would a learning space designed for learning (rather than body count) look like?  Tech could mitigate the need for massive spaces to warehouse lots of bodies.  We’ve build this complex and expensive communications infrastructure between schools, but we still expect teachers to burn fossil fuels and gather physically for material that could have more efficiently and effectively been delivered through interactive video and shared notes.  If the advanced life-long learners aren’t going to test these possibilities, who will?

It was in this environment, rather ironically, that Jenny Donohoo, one of the presenters, clarified procedural learning for me.  She did it in the context of metacognition, but it allowed me to more accurately understand why I fell out of subjects in high school that I otherwise had a great deal of interest in.

I’d initially entered physics wanting to get into astronomy, but instead of science being a tool with which to explore the universe, I discovered that it (at least in high school in the 1980s) was a procedural course designed to chase anyone who didn’t like repetition for the sake of it out.  I greatly enjoyed computers too, but the computer science teacher approached the subject with the same procedural bent, as did most of my math teachers.  I’d like to think that things have changed since I was taking those classes, but the amount of photocopies still pouring out of those departments suggests otherwise.

I’d often find myself in a  math or science class doing procedural work with no idea why.  I’m not averse to procedural work, in fact, I have a great deal of respect for it.  You don’t spend hundreds of hours power skating with a psychotic Russian figure skating instructor in full goalie’s equipment if you don’t appreciate what drilling can do for you, but I never suffered through that for the sake of suffering through that, I did it to become a better hockey goalie.


When students are asked to do procedural work (ie: getting drilled in skills so they become second nature), the reason why they are being asked to do this difficult, repetitive thing had better be crystal clear or you’re going to run into engagement problems.  I’ll suffer through power skating, or exhausting 6am practices in a frozen arena if I know it’ll give me a better chance at peak performance in my next game.  I’ll get up early and ride a motorbike until my legs are jello if I know it will lead me to a moment of bliss on two wheels.  I won’t do these difficult things without a reason.  No one has ever described dedication as doing something for no clear reason (that would be futility).

When I look back on my experiences in mathematics, science and computer science I see teachers who want to drill students without telling them why.  They want stringent discipline without a goal.  Unless you’re some sort of masochist or really enjoy being told what to do, procedural learning for the sake of it is likely to cause a great deal of friction with your learners; it chased me right out of those subjects.

Another thing Donohoo said in that PD was, “the most useful thing you can do for your students is find ways to communicate what is going on in your mind when you are practising your discipline.”  Maybe some teachers simply enjoy solving problems and couldn’t give a care that there isn’t a greater goal in mind, but that alienates a lot of students.  If your expertise allows you to do something useful, articulating that to your students is a valuable way to engage them in your discipline.

I’ve tackled this from an individual teacher perspective, but procedural learning leaks into the classroom in other ways.  The most obvious example is the data gathering process of standardized testing.  You can take any complex skill like literacy or numeracy and by applying standardized testing to it, reduce learning to procedure.  Doing this can often result in better standardized testing scores!  No one loves procedure more than statistics gatherers.  I’m speculating, but I bet there is a high correlation between those teachers with encyclopedic, complex marks books and procedural approaches to learning.

They are usually the ones wringing their hands over engagement and classroom management.

The idea that education is something we do to students fits well with this procedural approach.  Bells ring, ten year old photocopies are handed out, teachers repeat what they’ve said before word for word, and we continue the production line.  Sometimes I’m amazed that anyone learns anything in a school.