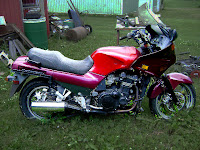 When I first got the Concours last year, I wanted to get it on track for the kind of mileage that these long distance bashers are capable of.  I picked it up with 25072 miles on the odometer, though it had a seized speedo cable so that might not have been accurate.

This summer has seen me do trips well beyond the scale of anything previously.  As soon as the snow lifted (almost), Max and I made a run up to Collingwood.  I then did a circumnavigation of Georgian Bay, and then outdid both with the ride to Indianapolis.  With all of that I was closing in on my goal of breaking the thirty thousand mile mark on the $800 Connie’s odometer.

With the weather turning I was still a couple of hundred miles away from finishing my season on target, but a sunny, cold October day lay 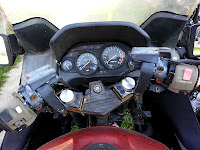 before me offering the chance at putting the Connie to bed with a milestone on it.

I’d originally wanted to crush 30k with a ride around Lake Huron, but time constraints meant it couldn’t happen.  Fortunately I was close enough to hit my goal locally.  To do it I cobbled together my favourite local rides, going from the Forks of the Credit to Hockley Valley to Horning’s Mills and then up to Creemore before coming back via Noisy River and Grand Valley.

With the temperature dropping and frost glinting in the early morning sun, the roads are much quieter than they were during the summer.

It was a cold haul over to hot coffee at Higher Ground in Belfountain, where I warmed my hands on the mug while surrounded by Caledon’s fashionable trophy wives, drinking coffee at their leisure on a weekday morning.  My bike was the only non-Mercedes SUV in the parking lot.

Once warmed up I went back out and did the Forks without another car in sight:

It was so much fun that I thought I’d come back the other way, but quickly found myself behind a Lexus who had trouble keeping it moving let alone staying on their side of the road:

After getting out from behind this mobile-Lexus-chicane, I cut north on Mississauga Road and enjoyed a long, empty loop up Hockley Valley Road and back through Mono Cliffs.

With warm hands I then tackled River Road out of Horning’s Mills, once again without another vehicle in sight.  A magic moment happened when I rounded a corner to find myself riding next to two deer running across the meadow next to me.  The lead deer looked across at me, then back at its running partner and then bounded off into the tree line.  I couldn’t have imagined a more perfect moment – just the kind of thing you’d want to catch on your action camera, except I hadn’t turned it on.


A short rip up Airport Road had me in Creemore for lunch at the Old Millhouse.  After some hot beef poutine I was back out into the ever-warming day for a twisty ride up Noisy River’s County Rd 9 before heading back through Grand River and home again.

Over the winter the Concours is getting new brake pads, the lines on the rear brakes and clutch are finally getting braided lines and both wheels are getting new bearings.  New tires are also in the plan.   The Bridgestone on the front has been fantastic while the Dunlop on the back has sometimes been squirelly, so a full round of Bridgestones are the goal.

While the rims are off and naked I’m going to look into doing a professional clean up and powder coat with them (not too expensive, maybe a hundred bucks a rim?).  I’ll also look over all the rubbers and plastics to make sure it’s ready for another busy summer next year.  I think 40k is a good target.  Time is the issue, I think the bike will have no trouble managing the miles.