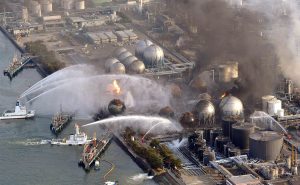 Everyone is wringing their hands over the disaster in Japan, questioning nuclear energy (usually while using it to power their computers to post complaints about it). I’m a fan of nuclear energy, but it does come with risks, especially when you hit well run facilities with a massive earthquake and then a ten metre wall of water. In these circumstances a disaster is immanent.

If we really want to deal with our electrical dependency we need to change the way we’re using it. We only develop industrial scale electrical generation to keep prices artificially low and hide the costs of generating it. Don’t think it’s hidden? Do you have a nuclear/fossil fuel fired/wind farm generating system near you? If you do, you don’t think it’s hidden.
Eventually what you want is locally generated electricity. If this is done on small, local scales it doesn’t have to be painful. The NIMBYism that surrounds generation is because industrial scale operations are planted in people’s back yards. A personal wind collector isn’t that big a deal, dozens of three hundred foot tall towers are.
Conservation shouldn’t be a choice, it should be a standard. From the existing infrastructure a cap of 100kWh/person/month in a residence could be a starting point. We need existing infrastructure to maintain this standard for us. That means continuing to use nuclear and fossil fuel generators.  If you want to generate your own after that you’d have first dibs on using it (it would be added to your total usable amount). Whatever you don’t use in a month is refunded back to you. A family of three who generates 200KWhs a month would be able to live much as we do now (we average about 500kWh a month in a 1700 sq ft house in Canada). A dozen solar panels on the roof would exceed this if well placed and maintained. Our neighbor has just done this very thing, they are making more electricity than they use in a month now. Three houses could share the cost and maintenance of a small scale wind generator and live at current consumption levels comfortably.
This is with existing technology. Future technology in both concentrated solar and lighter than air wind turbines that hang above the boundary layer of air are much more efficient. Focused solar produces stunning amounts of energy in a short time and lighter than air wind turbines resolve many of the problems surrounding noise while at the same time making use of the more constant and efficient air streams above the turbulent air that flows over the ground.
A mandated push into self generated electricity would put an end to industrial scale mega projects (nuclear, wind farm, fossil fuel burning or otherwise). The problem we have is that we want other people to do all the work to generate electricity out of sight and out of mind. We take no responsibility in what we consume and then complain about how it’s all being done. In many cases we’re completely ignorant of how these systems work, and after reading the panicky comments on the internet this week, I’ve realized many people are happy to live in fear and ignorance of nuclear power generation as long as their bills are low. How someone can attack nuclear power generation while using it to power their house and post stupid comments on the internet is an irony of our times. It’s time we started taking responsibility for what we are using.
Decentralizing the electrical system means making a system that is less a one way delivery system from industry to consumer and more a web of interconnected users and generators. This smart grid would encourage and make use of locally developed energy generation. Even if you aren’t using your solar at a given moment you could be using your neighbor’s wind or locally developed hydro. By using local sources the losses in transmission fall dramatically. Our current industrial/remote generation model loses about 6.5% of the energy produced to transmission. The further you have to transmit, the more you lose. Those long transmission systems are the sources of failure in ice storms and what over heat when energy use is too much. Transmission is our greatest single point of failure (though generation is giving it a run for its money in the news this week).
Until we take responsibility for generating at least some of the energy we want to use, we will keep making massive, industrial scale power generators that cause local problems. Taking the money spent on new, large projects and applying to locally generated power is a first step. Not forcing industrial scale energy production just because it’s sustainable (a question in itself), but truly democratizing energy production. Existing infrastructure could be modernized and eventually downsized as the power grid becomes decentralized, more efficient and a true multi-directional conduit for us to share our power amongst ourselves. 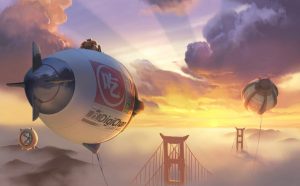 In that future, Japan would have had fewer nuclear power plants operating when the tsunami hit, locals in Wellington county wouldn’t be upset over heavy handed provincial plans to force massive wind farms on them, and we’d pour money into the companies that are doing R&D on more efficient solar and wind systems. That future might have solar energy collecting windows in every home, focused solar collectors that rise out of the ground every morning and disappear at night, and turbines hanging in the steady winds hundreds of metres up, constantly generating in a small but sustainable way.
There is no doubt that large scale electrical production still needs to occur. Nuclear systems need to become even more efficient, and eventually lead to fusion and other more advanced energy systems. We learn a lot from generating nuclear energy (more than we do from doing what cavemen did on an industrial scale by burning fossil fuels). What we learn from those big projects might eventually lead us to orbiting energy production and other space based solutions.
Even at its best a massive population centre would have trouble keeping up with demand. Businesses are by far the largest energy hogs. Stories last summer about stores leaving their doors open and air conditioning on full blast so customers would be enticed in on a hot day are representative of how businesses don’t think about conservation. A 100kWh/1000 sq/ft/month limit unless they begin to generate their own would be a start. Having much larger roofs, these stores could easily produce much more electricity if they wished, and perhaps they’d be a bit more reticent about flushing it out the door on a hot day if they were paying properly for it.
If we could begin the process of diversification by demanding legislation that requires an energy network rather than a distribution system (this is already happening), and encourages people to take on the responsibility of at least some of their own energy generation and consumption, then at least we’d be moving in a better direction than our current one of ignorance, fear and NIMBYism.