Stephen Hurley at VoicEd asked for a reflection as the year ends, so I’ll give it a whirl.  This is going to be tricky to do without spiraling into Nietzsche’s abyss.

This past school year started with the worst summer of my adult life.  I’m still recovering from my mother’s suicide and I probably shouldn’t have resumed teaching in the fall, but I did out of shear stubbornness.  Rather than trying to deal with this nightmare in a quiet year I got to do it during one of the most turbulent political periods in Ontario education.  You need only look over Dusty World in the fall to see the white water political ride education in general and my board in particular went through. 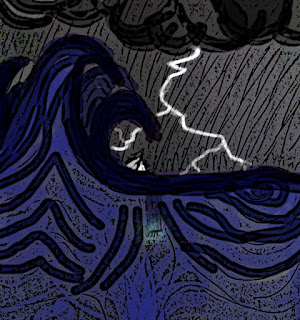 In a few short weeks, as OSSTF swung from a confrontational stance with the Liberal government that I supported by volunteering on our district executive and attending many rallies, I found myself suddenly muzzled by an organization that I realized I have very little in common with.  Rather than standing up for what is right, they would rather do what is expedient.  I’ve never been good at bending a knee to bullying, even if it does serve a political end.  It’s half a year later and our OLRB complaint against OSSTF for misrepresentation is still awaiting an outcome.  Being an idealist I find this very upsetting.  It seems any organization is politically self interested before it can stand for anything else.

It’s easy to forget that teachers are people, and the job is a deeply personal one.  This past year has had a number of strange confluences both personal and professional for me.  As my school and board tried to leverage the suicide of Amanda Todd to address bullying I couldn’t help but feel that this was manipulating misery for some kind of administrative end.  The contrite, ‘suicide is bad, don’t bully someone into it’ struck me as simplistic.  That cyber-bullying got selected by the media as the cause of her suicide (which a number of anti-technology teachers immediately trumpeted as proof that we should back off on it) was doubly frustrating.  That Amanda, like my mother, suffered from years of mental illness tends to be ignored because dealing with something as complicated as mental illness is more than most organizations, no matter how well intentioned, are willing or able to do.  That provincial and federal governments have basically bowed out of caring for the mentally ill has put a great deal of stress on already over stressed families.  If we’re going to address mental illness it better not be on a poster stuck up in a high school.  This trivializes a very complex issue.  Suicide is never a simple result of bullying, it’s the most profound, existential decision you’re ever going to make.  It deserves more than a soundbite.

Between the fractured politics in education and my own personal baggage 2012/13 has been a difficult year to manage.  As the storm subsided and we began our two years of government mandated contract, the school trundled on and extracurriculars resumed, kind of.  In a subdued second semester I began to get some closure with my Mum and tried to find ways to get back on my feet again.  The first semester was like watching a horse with a broken leg that didn’t have the sense to lay down.  At the end of second semester I’m able to stand without it hurting so much.

With some perspective on a year that felt like nastiness was crowding in all around me, I’m able to see the good that happened too.  My wonderful wife has done backflips to help me through this, all while battling the same political nonsense and working on her Masters.  My spectacular son continues to astonish me with how deep he is getting, even as the education system continues to wring its hands over how not-normal he is.  I got a new principal who knows what she’s doing and who appreciates the work I do.  I’ve been able to develop my professional interests both as a department head, teacher and online PLN presence.  My board has been developing a real 21st Century presence in educational technology and I feel like I’ve played an important part in arguing for that.  The year has been very professionally satisfying, if you ignore the Ministry, the union and the media… which is probably good advice.

Even with a nasty political infection, education in Ontario has been able to produce outstanding results, and I’ve been able to develop my professional self in satisfying and challenging ways.  No year is ever going to be without challenges, and the challenges of this year have been mighty, but that I’m able to find intense intellectual satisfaction in my profession is a great help when dealing with all the slings and arrows life can throw your way.