What I miss most about STAY AT HOME pandemics:  Getting lost on unfamiliar roads… 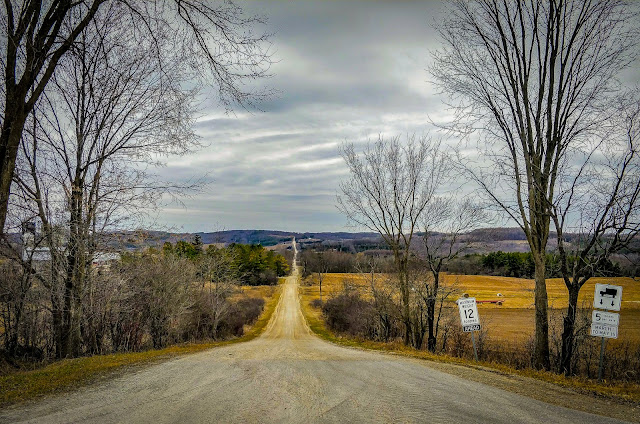 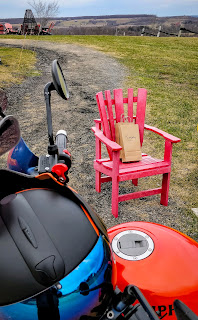 I’m lost in the Grey Highlands on my way to Coffin Ridge Winery for a COVID-shutdown social-distancing/prohibition vibe pickup of some of their Back From The Dead Red.

I lost my internal compass on the unfamiliar, winding roads of Walter’s Falls (though it could have been the meteorite buried under the town) and ended up in Bognor! It doesn’t just sound like it’s out of Lord of the Rings, it looks it too.  I guessed west when I should have turned east and found myself in the Bognor Marsh battling fetid, shambling swamp creatures like a later day knight aboard my trusty Tiger.

I eventually fought my way out to the shores of Georgian Bay, looking north across the never ending grey water to the end of the world (or its equivalent in French River).  Coffin Ridge Winery, perched on the north facing edge of the Niagara Escarpment, was pandemic deserted but for a lone fellow looking over the vines in the bitter, overcast April wind blowing in off the bay.

Ironically, adventure is hard to come by in a stay-home pandemic shut down, but this gave me a much needed shot of it.

Kiri at Coffin Ridge was a delight to communicate with on email and had our order sitting on the red chair ready to go (I was only 20 minutes late, battling Bognorian Shambling Mounds not withstanding).

If you’re riding in Southern Ontario and looking for a bit of adventure in your antiseptic COVID bubble, a ride into the Grey Highlands might just bring you back from the dead (red).  You can reach Kiri here.


From the #covid19 closed Thornbury Harbour inland through Beaver Valley, with a brief comfort stop at the hydro generator before heading south west through Flesherton – I eventually had to turn the camera off due to rain.
#Theta360 on a flexible tripod attached to the wing mirror of my Triumph Tiger 955i. One timed photo every five seconds. #360Photos modified in Adobe #Photoshop into #LittlePlanet format and then formatted in Premiere Pro into a stop motion video. AIVA AI generated background music.