Ontario gets you to buy a vehicle history when you transfer ownership.  The main reason is to make sure you’re not buying something with an existing debt on it, but I like it for the history lesson; you get a good sense of a bike’s life from that list of dates and owners.  I’m the third owner of the Tiger.  The first one owned it for most of its life.  The guy I bought it from owned it for a short time (I think it was his first bike) before passing it along to me.


The Fireblade’s history also tells a tale.  In July of 1996 it was sold to a guy in West Hill, Ontario (part of Scarborough in the east end of Toronto).  He sold it to McBride Cycle in Toronto (Percy’s name is still down as the owner on bikes they brought in then) less than a year later in May of 1997.   McBride Cycle moved it on to a guy in Mississauga two months later in July of 1997.   The previous owner to me bought it in April of 1998 and owned it up until his divorce when he gave it to his ex as part of their separation.  It then sat with her through the divorce until her new boyfriend dropped it off for me last September, 2019.  Timeline wise, the owners of this bike have lasted:

I’m the 5th owner of the bike, and if I hold on to it for more than ten months I’ll be the second longest owner it has had.  This 23 year old Japanese super model only has twenty-five thousand kilometres on her and sat unused for long enough that the petcock that metres fuel out of the tank failed and flooded the engine, then it sat broken in a garage. 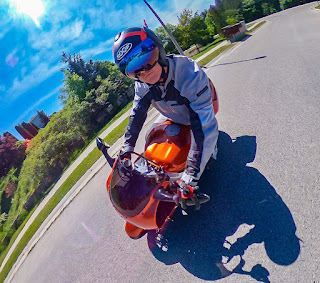 This Honda is a ‘supersport’ bike with ‘hypersport’ tires, meaning they’re soft, grippy and don’t last long.  I once heard a story of a guy who used to drive his supersport bike to twisty roads in his van, ride it hard for a couple of days, and then open up his van and change to new tires using the tire mounting equipment he kept mounted in there.  Heavy handed riders can burn through a set of these types of tires after a single track day.


Lloyd at Mostly Ironheads measured the depth and determined that the ‘Blade needed new tires to meet safety requirements.  I’ve got the ‘Blade raised up in the garage at the moment and had a good look at the tires today, and found these: 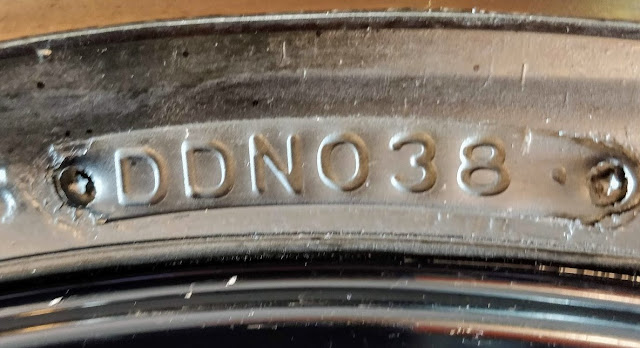 But the numbers didn’t make sense to me because I’ve never had a bike with tires made before 2000.  Tires after the year 2000 have a four digit code printed on them showing the date of manufacture, so you know if they’re getting stale (rubber goes off over time).  If you see a 3507 stamped on your tire after the DOT designation it means they were manufactured on the 35th week of 2007.  But the ‘Blade’s tires show a 038 on the rear and a 395 on the front. 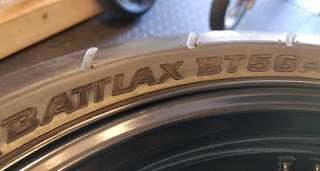 Pre-2000 tires only had a 3 digit code on them.  The first two are the week and the last one is the year, but you get to guess the decade, which is why they updated it in 2000.  If I’m reading the Fireblade’s tires right, the rear was made in the 3rd week of 1998 and the front was made in the 39th week of 1995.  The tire model is a Bridgestone Battlax BT56F, and they were kicking around in the 90s.  It appears the “Blade’s tires are well over 20 years old.

Sorting out tires during a pandemic should have been a real headache, but it was another COVID19 supply line success story.  I fired out requests to Two Wheel Motorsports, my local dealer, but they couldn’t be bothered to respond.  I also tried to reach out to all the local tire stores and not one had the tech to do motorcycle tires.  I tried other local bike shops, but once again, radio silence.  It’s like some people just don’t want to make money during this situation.  Perhaps getting handouts from the government is all they need.

The only reply I got was from John at REVCO.CA, an online tire company out near Ottawa.  He was straight up with me, saying that they can usually turn around an order in a matter of hours, but it might take up to a week right now.  What convinced me to spend nearly four hundred bucks with him was his responsiveness and openness, so I ordered the tires.  REVCO outdid themselves, delivering the tires within 48 hours.  Fortunately Lloyd at Mostly Ironheads can install tires, but not balance newer rims (he focuses on heavy metal from the 20th Century with spoked rims, not racing alloy rims).  It wasn’t a worry though because Revco also had Counteract balancing beads, which I’m a bid fan of.  I removed the old fashioned balancing weights, installed the beads on the new tires that Lloyd installed on Saturday morning, and the ‘Blade feels like it’s walking on air, wearing her first new pair of shoes in over two decades. 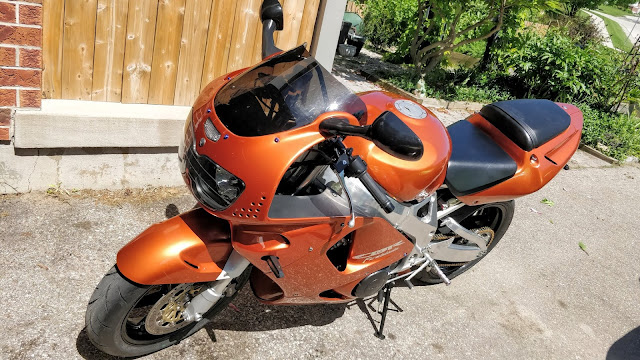