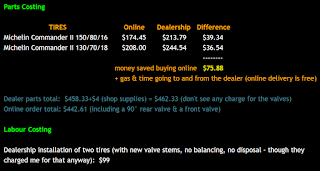 I’ve looked into the savage world of motorcycle tires before.  Way back in 2016 I got fixated on customizing the rims and putting new rubber on the Kawasaki Concours, and got introduced to the expensive nature of buying half as many tires that wear out way faster.  That first time left me with a $500 bill for getting 2 Michelin Commander sport touring tires installed and left me wary of the expense. 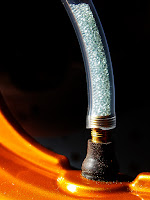 More frustratingly, I ended up using the Counteract balance beads anyway because the caveman weights used on a traditional balance machine still left the wheels with a wobble, so that $500 bill ended up being even higher, though it did make me feel way better about using those beads – they work better than weights and a technician half paying attention to the balancing machine.


In 2017 the Tiger’s tires were getting tired, so I was once again at Two Wheel trying to get in for service (they suggested a one month wait was likely that time – local car tire places really need to look into this market).  At that time they were pricing Michelin Anakees at about $420 for both, with another $100 for installation which was only the tires because if I wanted service within a week instead of a month I had to remove the tires and bring them in myself.  With taxes and incidental costs that crept in on the bill, those two tires ended up costing me almost seven hundred bucks, and I had to take the damned rims off and put them on myself!

Fast forward to 2020 and supply chains are in tatters (not that they were that good a couple of years ago).  After trying to contact Two Wheel and getting no response to multiple attempts, I started looking elsewhere.  No local tire companies do motorcycles – you’re missing a market there everyone.  Motorcycle tires wear out quickly, get replaced often and cost more!  The only motorcycle focused company that could be bothered to raise a response was Revco, who were responsive and delivered the tires quickly and efficiently, even beating expectations I’d have had pre-pandemic.  If you need motorcycle tires in Canada, Revco can and do deliver!


Where am I at with costs this time around in the expensive world of motorcycle tires during a pandemic?  Counteract Balance Beads were just under thirty bucks, the two tires were $126 & $155, so the whole bill came out to $310.  I’m at $360 including taxes and delivery.  Lloyd installed them for $100, so now I’m at $460 for this round of motorcycle rubber.  That’s 35% cheaper than my last pre-pandemic tire buying experience. 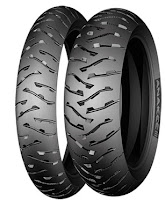 Just out of curiosity I looked up the same Michelin Anakee tires I put on the Tiger three years ago that ended up costing me $500 just for the rubber.  They’re starting to square off and have a fair number of kilometres on them, so an over-winter tire change is likely this year.  On Revco three years later they’re $382 delivered with taxes, or 24% less expensive.  Even Lloyd’s newly updated shop costs for installation at Mostly Ironheads are less than dealer costs in 2017, and are done in 48 hours.  I’d be at $482 ready to roll when it cost me $700 before.


I know where I’m going and how I’m getting tires fitted from now on – and I’m even supporting my small, locally owned shop in the process.  The only thing preferable would be my own tire installation machine, but I can barely fit in the garage as it is, so that’d only come after a house move.  With the deficit in service around here, maybe I should just be doing motorcycle tires out of my garage anyway.