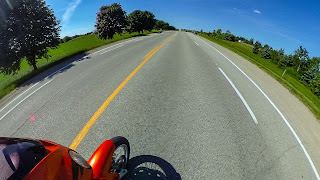 The other week I was out for a short ride up and down the river on a swelteringly hot day.  On my way back home I was accelerating out of the small hamlet of Inverhaugh when I noticed a bike down on the side of the road and the rider standing there looking at it.


I immediately checked my six (empty road) and indicated to pull over.  I stopped about 50 feet up the road from the downed rider and walked back.

The rider turned out to be Natalie, a 20-something on her first bike, a Ninja 300.  She couldn’t lift the bike, which had fallen when she stopped to check directions, so I helped her get it back on its feet.  All was good except a bent shift leaver which was pushed in to the point where it was interfering with the frame – we couldn’t get the bike in gear which means she couldn’t ride home.


If I’m going any distance I have a tool kit on the bike, but this being a short ride, I wasn’t so equipped.  Natalie had been out all day in the sweltering heat and had elected to head home rather than stop with the group she was with for a late lunch.  Exhaustion (no doubt some of it heat related) and a moment of broken concentration conspired against her and the bike tipped over.


A car with a couple in it has stopped so I asked if they had a tire iron I could use to gently bend the shift lever out.  I didn’t want to yank on it too hard for fear of damaging the seals.  There was fresh oil around the lever, so I was worried that it had already been damaged in the fall.  The couple didn’t have a tire iron – but I suspect it was more a case of they didn’t know what that was or where to find it.  With no one else stopping in spite of frequent traffic and our options limited, Natalie called one of the riders she’d been with who was only 10 minutes away, back in Elora at a restaurant. 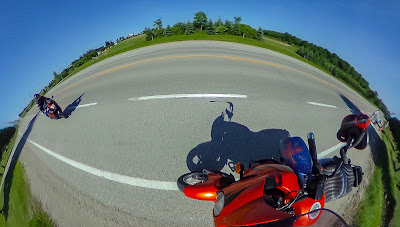 A few minutes later, under the sweltering sun, a Suzuki Hayabusa showed up with a “fuck fear” sticker on the windshield.  The hard man riding it hopped off and went about yanking on the gear lever until it was clear enough to move freely – he seemed determined to resolve things quickly.  I told Natalie and her friend that if they needed any assistance I was only 10 minutes away in Elora and they would be welcome to come by if they needed tools, and then I left.


As I pulled away all I could hear were stereotypes ringing in my ears.  I’d initially seen a sports bike down and a rider in sporting gear on the side of the road and had to fight an involuntary prejudice that they’d been assing around and tossed themselves at the countryside.  That, of course, wasn’t what had happened at all – it was a case of a fairly new rider doing too many miles in tough conditions and underestimating how physically demanding that can be.  We all do that to start off with – I told Natalie how I’d dropped my first bike several times while trying to do too many things at once.


Then there was the moment as I approached when I thought, hmm, that’s a mighty small fellow, before I realized I was approaching a female rider who was looking frustrated and overwhelmed.  My wife later asked if I was worried about stopping and making her uncomfortable.  That hadn’t occurred to me at all, but perhaps it should have.  Considering the circumstances, I think safety trumps any worries about chivalry or chauvinism.


When the ‘fuck fear’ ‘Busa showed up with rider to match, I was again fighting that sense of stereotyping, but he had cut out on everyone else and a much needed late lunch to get out there and help his friend.  All the tattoos and attitude couldn’t hide that sense of kindness.


Then there were the ten or so cruisers that puttered by without stopping or even slowing down to see if everyone was alright.  These are the hard core types in leather who go on and on about how nice bikers actually are and how they always stop to help a fellow rider.  Perhaps these brotherly and sisterly biker types were all late for some kind of pirate fancy dress party; there was another stereotype broken – or perhaps they only help their own subculture.


Any time I see a rider on the side of the road I slow and give them a tentative thumbs up, which they have so far always returned.  If they didn’t, I’d stop to see if I could help.  This doesn’t have anything to do with a magical bikers code of conduct or chest thumping self-righteousness.  If someone on a motorcycle (any motorcycle, it doesn’t have to be made in Milwaukee) is stuck on the side of the road, they can’t sit in a safety cage and they’re at the mercy of the elements.  Leaving them out there because you’re too selfish or lazy to stop is both dangerous and cowardly; riding by like you didn’t see it makes you a giant tool, even if you do like to strut around telling everyone what a paragon of virtue you are.


I’ve no regrets about stopping.  I’ll keep doing it because it’s what everyone should do. 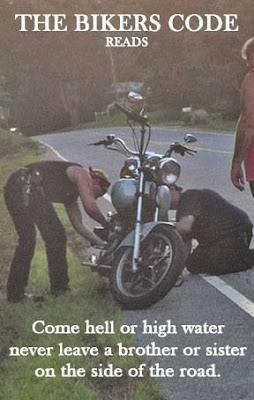 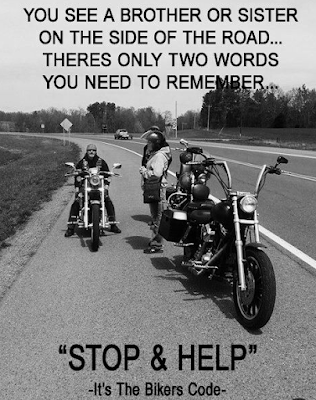 Lots of talk about codes and looking after each other… but it’s all kind of bullshit, kind of like their grammar.